Home Horror We Can Hear You Scream: An Overview of SF/Horror Literature

The fear of the dark, the unknown, the monster standing right behind you ready to tear you limb from limb…is part of the human condition. Since the dawn of civilization we have been terrified by creatures we can neither comprehend or defend against. Even as the mysteries of the universe unfold before us thanks to human science, no one has managed to cure this shared experience. I firmly believe these primordial horrors are likely to travel with us when we leave the bosom of our home planet for the new frontier.

A house can be haunted regardless of whether it is a boarded up shack in backwoods Maine or a domed habitat on the red sands of Mars. A serial killer can easily stalk you through the streets of New York or the walkways of a floating city of Europa. And if Stephen Hawking is to be believed, God help us if we actually meet intelligent alien life.

When thinking about the next topic for my literary exploration, I have to give credit to my friend Ken “The Fancy Gentleman” Zuckerman. He is the co-host of the new horror fan podcast: Super Evil Vampire Robot Po​dcast of Doom. After listening to him and his fell co-hosts geek out about the horror genre, I got to thinking about whether there were enough horror/SF novels to warrant a series of posts for Amazing Stories. My concern was unfounded and I was surprised by just how intertwined the two genres are. This is further proof about how flexible science fiction is, or as John DeNardo of SF Signal said in his article on science fiction and horror: “[t]he beauty of fiction is that it does not limit itself to our preconceived notions of “genre.” A single story can have elements from many genres…And so it is with science fiction, a genre which can easily incorporate elements from other genres.” 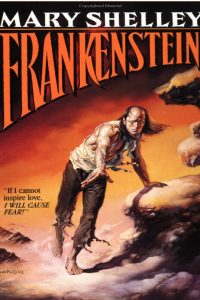 We begin to see a crossover between horror literature and science fiction in the 19th century. Supernatural terrors of the previous century are replaced by tales featuring scientists mucking about with existence and it going horribly wrong. Great examples of this trope include the Strange Case of Dr Jekyll and Mr Hyde by Robert Louis Stevenson (where a doctor creates a potion which brings his evil alter ego to life) and Frankenstein by Mary Shelley (where a scientist is obsessed with reanimating the dead…and is successful). Both tales are classic works of fiction and continue to resonate with modern fiction. Consider how similar Victor Frankenstein’s monster is to a robot. Both are brought to life from dead materials and, in accordance with the popular trope, turns on its master.

The 20th century brought us on of the most influential names in both horror and science fiction: H.P. Lovecraft. Although probably remembered best for his “weird tales” or “cosmic fiction”, Lovecraft’s tales in my humble opinion are magnificent blend of horror and literature. Although Cthulhu and the other Great Old Ones might appear to be supernatural entities, in reality they are extraterrestrials following a set of natural laws, but due to humanity’s limited understanding we perceive it as magic and according to Clarke’s Third Law: “[a]ny sufficiently advanced technology is indistinguishable from magic.” So does that mean the incomprehensible horrors faced by the countless Lovecraftian horrors be defeated or at least contained by advanced human science? Personally I have always been of the opinion that humans could learn to adapt and even benefit from the Cthulhu Mythos. Nevertheless, Lovecraft’s writings have been so influential you continue to see works set in his universe or inspired by his literary style.

As the 20th century marched on and science advanced with it, we began seeing supernatural horrors given a scientific explanation. Although the science itself made little sense, it had enough internal consistency to bring those famous monsters out of the supernatural and into the realm of science fiction. I Am Legend by Richard Matheson features a lone survivor of a pandemic that created a world of vampires. As he hunts the slumbering vampires during the day, he also researches the condition and dispels many of the common myths associated with the creatures. For example, in one scene he remarks how a vampire he captured who was Jewish while human showed no discomfort when shown a crucifix. I Am Legend inspired writers also to give another creature a scientific origin: zombies. Whether caused by radiation or a virus, the zombie apocalypse tale has continued to entertain readers over the decades. If you haven’t read it already, I recommend checking out a copy of World War Z by Max Brook. This oral history of a worldwide zombie outbreak and the war to reclaim Earth combines horror and even a little military SF.

Modern writers continue to dabble in tales combining horror and SF tropes. Old stories continued to be re-imagined in new and unique ways. The classic alien invasion story begun with The War of the Worlds by H.G. Wells can trace its line to Infected by Scott Sigler, the terrifying and graphic tale of an alien invasion one poor human at a time. Heck, the cover of said novel is terrifying in itself. My wife made me remove it from my bedside table because she was tired of waking up every day and seeing a blue triangle eye staring at her. 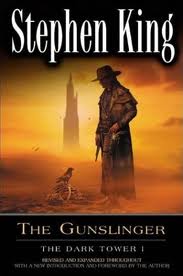 Stephen King has written dozens of stories about aliens and Lovecraftian entities terrorizing humans (usually in Maine). Even his Dark Tower series, which reads as an epic fantasy, has elements science fiction and horror. While the main character Roland Deschain and his companions fights monsters, demons and mad gods; we are also given glimpses of an advanced civilization complete with robots, time travel vacations and parallel dimension hopping that went as far as using machines to regulate reality itself…and these now malfunction machines can be seen as responsible for the current state of Roland’s reality. Seriously, if you like Lord of the Rings, westerns and a good scare now and then, pick up The Gunslinger now.

Over the next several weeks I am going to be diving into the world of “science horror”. I am casting my net as wide as possible and hope to reads works both classic and contemporary, to traditional publisher and small press. In the meantime, if you would like to learn more about SF/horror films, this month’s episode of Super Evil Vampire Robot Po​dcast of Doom features the gang discussing some films you may be interested in.

I hope you will enjoy our journey together…just remember to stay out the shadows.