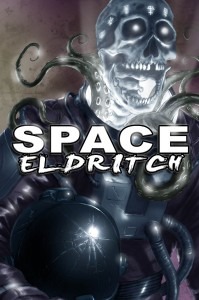 Two of the most popular subgenres of the fantastic are space travel (with its myriad sub-subgenres) and cosmic entities with malevolent intentions, popularized by H. P. Lovecraft.  Now Cold Fusion Media has brought them both together in the anthology Space Eldritch.

The book contains seven novelettes and novellas by eight authors, most of whose names were new to me, plus an introduction by Larry Correia, whose name was not new to me.  Before I discuss the individual stories, I want to talk about the volume as a whole.  I honestly didn’t know what to expect.  Having only read a few of the authors whose work the Space Eldritch contained, I had no feel when I started reading what the stories would be like.  We’ve all encountered books, whether novels or anthologies, which have an interesting premise but whose content doesn’t live up to its potential, usually because the author’s reach exceeds his/her grasp.

I’m glad to say that wasn’t the case here.  Not only is the writing professional level in every case, but several of the authors do some daring and innovative things.  The range of story is quite diverse, with no two stories being very much alike in terms of plot.  I was expecting to see a lot of H. P. Lovecraft in space.  And while the shadow of the gentleman from Providence does loom over the contents of the book, this is far from outer space pastiche.

What people sometimes forget is that much of Lovecraft’s work, especially the Mythos, is in essence science fiction.  While the occult trappings of incantations and forbidden books abound, the universe Lovecraft imagined is one of alien worlds and otherworldly beings.  In other words, science fiction, albeit in many was the science is that of a bygone era.

The book leads off with “Arise Thou Niarlat From Thy Rest” by D. J. Butler.  This was the most like Lovecraft of all the stories in the book and the one that draws the most directly from the Mythos.   It’s a complex tale taking place in the ancient world, the basement of a house outside of Arkham, and on a deep space mission in which the crew are in coldsleep.  While the characters in the different settings don’t seem initially to have any connection to each other, the different plotlines do come together in a satisfying conclusion.

Michael R. Collings puts us in interstellar space with “Space Opera”.  This was the most ambitious story in the anthology.  Collings gives aliens who are truly alien yet not so different that we can’t relate to them.  The aliens are in the process of conquering the galaxy when they encounter a world, not Earth, inhabited by what appear to be humans, a species the aliens have never encountered before.  The humans refuse to submit to the aliens because it turns out the humans already have masters.  The thing that made this story so ambitious was that Collings tell his tale entirely from the alien point of view and shows the workings of an alien culture that is more than simply humans in rubber suits.  This a hard trick to pull off, but the author makes it look easy.

“The Menace Under Mars” by Nathan Shumate takes place in an alternate timeline, one in which the League of Nations was successful, World War II appears not to have happened, and humanity reaches the planets in the 1950s.   That setup alone would make me want to read it.  Add a terraforming team on Mars in which one member, obsessed with finding evidence of live Martians, discovers an underground complex and goes off to explore it with a colleague.  He returns alone.  Or does he?  This one was creepy, especially during the rescue mission sequence.  And in spite of some horror movie type behavior on the part of a few characters (I don’t know what this does, so I’ll touch it), it was also one of my favorites.

We switch from alternate history to secret history in David J. West’s “Gods in Darkness”.  While we share the same last name, as far as I know David and I are not related.  We do follow some of the same blogs, so he was one of the two authors whose names were familiar to me.  I’ve read a little of his prior work, and he keeps getting better.  This story takes place during the early days of the Space Race, and involves secret rockets launched by both the Soviets and Americans.  There’s the civilian space program and a more advanced top secret military space program.  While the Cold War is in full swing down on Earth, up in orbit things are getting hot.  This one involves a covert assault on a secret Soviet space station.  Only there’s more out there than just the Soviets, something one of the Americans is counting on.  The microgravity combat in this one is especially well done.

“The Shadows of Titan” is the only collaborative effort in Space Eldritch.  It’s by Carter Reid and Brad R. Torgersen.  This one concerns the first manned expedition to Titan, where during the descent the explorers spot a large pyramid sticking out of the ice.  Of course the mission agenda goes out the airlock as they set off to explore it.  In some ways, this one was similar to “The Menace Under Mars” in that both stories concerned the discovery of alien artifacts in the solar system.  That’s about as far as the similarities go.  The nature of what the characters in the two tales find are totally different.  I may have seen Reid’s work before, and I know I’ve seen Torgersen’s work in Analog.  So I was a little disappointed when at one point, the narrator is speculating about the alien they found buried in the pyramid having its final resting place in orbit around Jupiter and not being able to see Jupiter’s rings through the atmosphere of Titan.  The problem with this is that Titan is a moon of Saturn, not Jupiter.  This threw me completely out of the story.  This is also something that can easily be fixed in an electronic book.  The initial setup is fairly predictable, but the authors took it and went somewhere I wasn’t expecting yet was entirely logical.  The ending very much had the feel of early science fiction, which is a good thing.

Robert J. Defendi’s “The Fury in the Void” is military space opera, about a holy war fought between two faiths, one descended from Greek Orthodox and the other from Russian Orthodox.  The Russians are pursuing a Greek ship that’s been committing atrocities in a particular region of space.  The situation is complicated by the fact that both faiths have incorporated the tenant that it’s a mortal sin to damage or destroy another starship.  This one is a brutal meditation on war and peace, anger and calm, and the conflict that can arise between what’s right and what’s your duty.

The final selection is “The Flight of the Runewright” by Howard Taylor.  Here, starships travel by way of runes.  The men and women who engrave the runes on the ships and spaceports, as well as those who fly the ships, have to wear patches over their left eyes or the runes will send their minds somewhere their bodies can’t follow.  The narrator of this one, Wendell Simonson, is the twin brother of a worker whose eyepatch came off.  After the accident, the brother won a trip off world in a lottery.  Simonson has assumed his identity in order to go himself.  He’s about to discover there are some things you can’t escape.  This one goes in some unexpected directions, some of them rather grisly.  It’s not for the squeamish.  Still, I liked it a lot and thought it was a good story to end the anthology on.

The production values for Space Eldritch were on the whole quite good, but not perfect.  The cover art by Carter Reid is creepy and beautiful at the same time.  I only saw one or two typos, no more than I would expect in a book from a major New York house these days.  The only real complaint I had was that the interactive table of contents didn’t work properly.  The links on the first several stories took me to points inside the stories, and the links on the later stories took me to the previous stories.  I don’t think any of them took me where they said they would.  I would think this is also something that can be easily fixed.

So, overall, I found this to be a good buy for my money.  And, yes, I paid for it with my money.  I didn’t receive Space Eldritch as a review copy.  In fact, even though I had one or two issues with it, I would think it’s a bargain at a higher price.  (Sorry, guys, but that doesn’t mean I’m sending you any more money.)  Space Eldritch is a diverse, interesting, and most importantly, an entertaining anthology.  I would read additional work by any of the contributors and am willing to read other things from Cold fusion Media.