In this week’s viewing: Galilei Donna and Kill la Kill check out life at the top of the heap, Kyousougiga goes behind the scenes, and more! 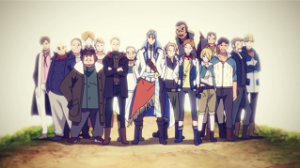 Galilei Donna #6 — The last couple episodes have hinted at the stress on a few places from peak methane hydrate and the new ice age, but here it starts to look like the entire human race is now locked in a descending spiral, scrambling for resources as energy and habitable territory run out. What the world needs is both a new energy source for general use and a means to restart global warming, and wouldn’t you know it, the mysterious substance in Kozuki’s amulet might fit the bill on both counts. Could it be that the Galileo Tesoro was right under the sisters’ noses all this time? Have I mentioned that The Blue Bird is really popular in Japan?

Faced with permanent scarcity, some people steal to survive; others with less ability or more scruples about it give up their children. One of the luckier kids is Roberto Materazzi (probably named for the recipient of a famous headbutt), who loses his parents as he learns that being nice to people never gets you anywhere, but is immediately recruited to be the heir to one of the biggest energy companies in existence. And some of the less-lucky orphans band together and ultimately become the crew of the Black Ganymede, who will hereinafter be known as the Pirates of Penzance.

It’s almost clear now where Anna’s money is coming from. Is it ultimately from Adni Moon, though, or from Materazzi acting of his own accord? 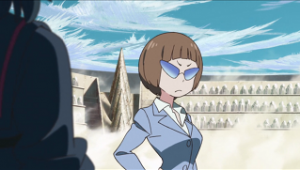 Kill la Kill #7 — Getting tired of having to fight an ever-expanding roster of clubs, Ryūko decides to try working the system, only to get an unpleasant lesson in how systems perpetuate themselves.

Mako gets a chance to really shine here. Given her family and school circumstances, she should be one seriously messed-up person, but she’s always been bubbly and cheerful and ready to offer Ryūko advice and support at key moments. Now, suddenly given something to fight for, she transforms from a listless student into an organized dynamo. And then, given a two-star uniform, despite no practice with it and trying to pull her punches, she’s comes out looking like a better fighter than all the other club presidents this episode combined. Mako is a seriously frightening person when she puts her mind to something. Let’s hope that next time it happens, she’s completely on the same side as Ryūko.

Note on one of this week’s clubs: The “Nanjing Lily” or Nankin Tamasudare is not some pecular acrobatic pose, but rather this tool made of linked bamboo sticks used in street performances. 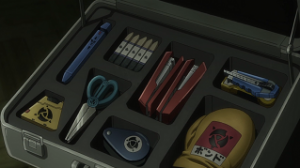 Samurai Flamenco #6 — There’s what Masayoshi needed—a mad scientist to make him lots of useful gadgets! It’s finally time to declare him a complete, fully fledged superhero. This puts him back ahead of the Flamenco Girls, who are still working on their groin-stomping technique.

But now Masayoshi is also facing one of the occupational hazards of the full-fledged superhero. That chilly premonition his manager is feeling is probably him suffering an injury in that fall that he won’t be able to just explain away and which may start to affect his paying career. Assuming that no one was filming that scene at the end on their phone and the injury isn’t overshadowed by a scandal over alleged gayness.

Incidentally, for your additional viewing enjoyment, this show now has an official English site. If you can’t read Japanese names, here’s your chance to find out who you’ve been listening to all this times. 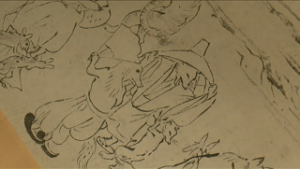 Kyousougiga #5.5 — When an anime series is produced on a shoestring budget with virtually no lead time, it may have trouble producing a full episode of new artwork for every week of the season. The usual remedy for this situation is the dreaded mid-season recap show.

Instead, Kyousougiga dispatches three voice actors on a field trip to Kyoto to tour some of the sites that appear in the show. Along the way, we learn about the historical Myōe (who lived in a completely different time period than depicted in the show, though) and the ultimate inspiration for the story, which is a famous set of scrolls drawn by an unknown Heian-era furry fan.

If you’re reading this in 2014 or later, when the entirety of Kyousougiga is available, my advice is to skip it until you finish the main story; there’s nothing in here that I think will be essential to understanding the show. But by all means, if you liked the show, then swing back and watch this episode, because you’ll enjoy learning more about it.

I’d rather have had another episode of actual story, but if there has to be a filler episode, this was immeasurably better than a clip show. In fact, I hope it starts a trend.

Are over-the-counter psychedelics in our future?