Here we are, finally. It’s October 28th, and Halloween is just a few days away, meaning that this will be the final installment of this year’s Ooky Spooky Animanga series. For those of you who have kept with me from week to week—not just recently, but throughout the year—have probably noticed that I have a bit of a thing for the weird and the creepy. Halloween is naturally my favorite holiday, and dressing up is a ritual that I still partake in without fail regardless of the fact that I no longer ring strangers’ doorbells and harass them for candy.

In light of the dress-up tradition, I would like to take today’s post to spotlight some of my favorite spooky characters in animanga.  Perhaps this will give readers some last-minute costume ideas as well!  Cosplay isn’t only for conventions, you know.

Sunako is a wonderful character from The Wallflower (Yamato Nadeshiko Shichihenge), by Tomoko Hayakawa. In the series, she lives in her aunt’s boarding house with four extremely attractive young men who are tasked with turning her into a “proper young lady” with the promise of free rent upon completion. As sexist as this premise sounds, Hayakawa actually does a really great job of not falling into too many tropes—partially because Sunako is such a stubborn character. Once informed that she was ugly by a middle school classmate, Sunako has become a recluse who collects anatomical models, gets excited over the sight of blood, and watches slash-and-hack films in the dark while polishing a human skull. Though she is extremely intimidated by her housemates—and resentful of their attempts to alter her introverted lifestyle—she has some truly shining moments of strength in both the physical and emotional sense. Don’t get on Sunako’s bad side, or you might end up on the receiving end of one of her fearsome punches—or worse, forced to watch Freddy vs. Jason in her creepy chamber of a bedroom!

(Sunako is a great costume for those of you who are spending a quiet evening at home this Halloween. Long-sleeved white shirt and red track pants with a white stripe—super simple! If you want to complete the look, a black wig with straight bangs, and maybe a fake skull to carry around.) 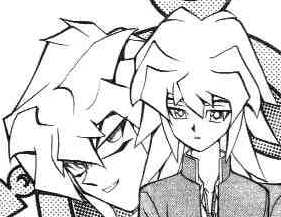 Keeping with the simple teenage characters to start, we have Bakura from Kazuki Takahashi’s incredibly popular series Yu-Gi-Oh! Most folks who have watched the show Stateside have seen the 4Kids version, which decided to cast Bakura as a British foreign exchange student with a world-traveling and somewhat neglectful father. Bakura did receive a very special gift from said father, though: an ancient Egyptian pendant, known as the Millennium Ring. Within the Millennium Ring resides the soul of an ancient thief powered by an evil god, hell-bent on wreaking revenge on the Pharaoh (who resides within the titular character’s Millennium Puzzle) who often takes control of Bakura’s body. It is extremely clear that Bakura’s evil spirit half is scary in the extreme; he has no qualms about sending folks to the Shadow Realm, rending their souls from their bodies, and otherwise causing a bloody mess. There’s even a scene of the spirit eating steak that was cut in the 4Kids dub because it was too scary. I’m serious.

As much as I love the spirit of the Millennium Ring in all his twisted vengeful glory, I want to acknowledge the person behind the demon, the all-too-often depicted as a wimpy, shrimpy Brit kid, Bakura the teenage boy. Bakura (frequently referred to as “Ryou” in fandom circles to differentiate him from the possessing spirit) suffers loss early in his life, with both his sister and his mother dying while he was in his formative years. This loss causes Bakura’s father to pour himself more into his work, distancing himself from his son and only remaining family. Bakura becomes obsessed with death. He discovers the occult. He likes all things creepy. In fact, it is he who develops the occult-themed Duel Monsters deck that his evil half uses to annihilate all of his friends with. The spirit is almost a representation of all the rage and madness and twistedness that lives inside Bakura, but which he is too timid and too polite to act upon.

(Once again, this is another simple costume, whether you choose to be the boy or the spirit. A blue-and-white striped t-shirt and some jeans will do it. A black trench coat would generally signify the spirit, since that is an embellishment that he often wears when possessing the shared body. The wig can be complicated if you want to get all the spikes right, but if you just want something quick and easy, a plain white wig would get the point across.) 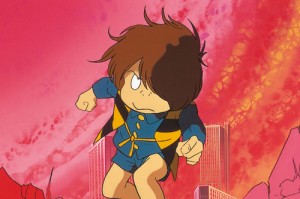 I briefly mentioned Shigeru Mizuki’s wildly successful series GeGeGe no Kitaro in last week’s post about Japanese ghosts and spirits. The story itself centers around Kitaro, a boy who lives in the graveyard and keeps relations between the living and the (un)dead smooth and pleasant. Kitaro is accompanied in his endeavors by his father, who is a giant eyeball with a tiny body, and his friends Nezumi Otoko (Rat Man) and Neko Musume (Cat Girl). Even though Kitaro has been in a manga series, six anime series, and several movies, he has remained pretty much the same character—with the same outfit—since his 1959 debut. Kitaro fills that same niche in the animanga world that The Addams Family and The Munsters fill in the West: fun, lighthearted, zany spookiness for all ages.

(Kitaro’s outfit consists of a simple blue shirt and brown pants with a yellow-and-black striped vest. Geta sandals are required, as is a large portion of hair covering the left eye. Knowledge of the Japanese spirit world is a definite plus.)

Yubaba and her twin sister, Zeniba, are perfect examples of classic witchiness. As the main antagonist of the blockbuster film Spirited Away, Yubaba is everything the fairytale witch should be: mean, manipulative, cunning, selfish, and a little bit bitter. She finds Chihiro in her bathhouse and immediately puts her to work, stealing her name—her very identity—from her. Zeniba, on the other hand, is the kindly witch, more of an earth-grandmother. She meets Chihiro and takes her in, rolling her eyes at her sister’s cruel tactics and doling out tea, cakes, and forgiveness. Once again, Miyazaki has done an incredible job at representing different kinds of women and seems to comment a little bit on the different aspects of womanhood in so doing.

[Yubaba and Zeniba both wear a large, old-fashioned blue dress and have an enormous head full of gray hair. Zeniba is more likely to be wearing spectacles and a kindly smile, while Yubaba should probably always be scowling or yelling. This would be a really fun, though ambitious, costume for real-life twins, especially if their personalities are as diverse as Yubaba and Zeniba.] 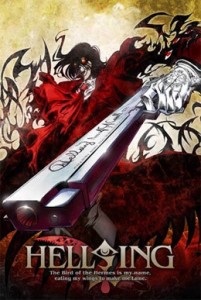 And here I come full circle, mentioning once again the dastardly protagonist of Kohta Hirano’s Hellsing, Alucard. There are many wonderful vampires in the anime world, and I already talked about that at length in my first post in this series. But Alucard wins the scariest award by a long shot. Of all the vampires in all of vampire lore, Alucard is the only one I would describe as being truly and completely off his gourd. He is so old and so beyond mortality that he doesn’t care about the difference between good guys and bad guys, between targets and innocent bystanders. And yet, there is a twisted sense of softness and obedience to him which almost makes him scarier; after seeing that he can completely disregard humanoid form and turn into stomach-churning, blood-curdling void-with-eyes, the idea that he’s purposefully keeping all that power in check at the request of a supernatural government agency gives me the shivers.

[Alucard’s costume requires a huge red trench coat, a large-brimmed red hat, and circular glasses with yellow lenses. A large pistol and some gloves finish the look. Alternatively, you can attempt to dress as his psycho-killing-dog-bat-monster-self…though I honestly don’t know how you would go about that. Good luck.]

So those are some scary costume options, based upon some of my favorite creepy characters. Personally, I’m not dressing as an anime character this year (I’m going to be Lydia from the animated Beetlejuice), but these are all costumes I’ve considered in the past. How about you, readers? What are you dressing as for Halloween? And who are your favorite scary characters?