In this week’s viewing: Time to pack our bags and head out for another new season’s premieres. 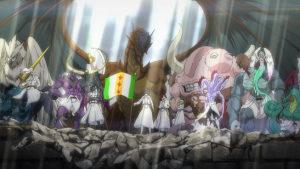 To the Abandoned Sacred Beasts premiere – In a civil war in a cannons-and-guns era, some kind of mad science discovery allowed the losing side to create soldiers with monstrous abilities. A side effect turned out to be that the monsters would eventually take over. Though the soldiers were to be executed near the end of the war, they escaped. Now they terrorize people, and their former commander has devoted his life to hunting them down.

This episode feels like it’s trying to pack an entire prequel movie in. It covers the entire rise and fall of the unit, including not just the effects on the soldiers but a bonus romance and rivalry. Its priorities lead to some odd moments, like when the commander is trying to rally his dispirited troops for one more battle, and the line that leads to cheers is… he’s finally going to ask the lady he’s in love with out?

In trying to make half a dozen characters sympathetic, it winds up giving nobody any real depth or personality. It barely even manages to mention the advertised protagonist. This doesn’t bode well for the rest of the show. 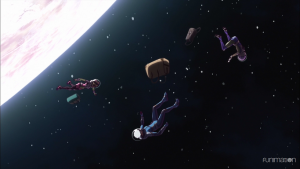 Astra Lost in Space premiere – In the year 2063, it’s completely normal for a bunch of high school kids to spend a week out camping on their own on an otherwise uninhabited planet. It’s somewhat less normal for them all to be eaten by a mysterious ball of energy that spits them out in orbit around a completely different planet, near an abandoned spaceship. Their trip becomes an immediate struggle for survival, leaving no time for questions like, “If space travel is common now, shouldn’t this ship have rescue equipment specifically for retrieving people who drift away?”

The next problem is that they’re stranded months from home, but no problem in this show is introduced without it being immediately rendered solvable thanks to someone in the group having just the right skills for it. Aside from skills, most characters have only been introduced by character quirk. The exceptions are the klutz who has had to be rescued twice already, and a guy who looks back fondly at the beloved teacher who taught him to survive and embrace toxic masculinity. 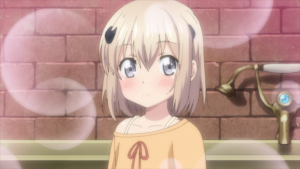 If It’s For My Daughter, I’d Even Defeat a Demon Lord premiere – Dale is a sword-for-hire in a generic medieval-ish fantasy world whose latest job is a quick monster cleanup in the nearby forest. There, though, he finds a lost, hungry child with demon horns. Her father or guardian is dead, and she carries the mark of an outcast. Dale decides he’s just going to feed her and find her somewhere to live, but starts finding himself becoming attached.

The point of this show is to let Latina, the demon girl, be adorable and win over everyone around her. Everything is subordinate to setting up maximum cuteness. If cute and low-stakes is your thing, this could be for you… just try not to listen to the rumors that the story ends with Latina growing up and marrying her adoptive guardian. Maybe the adaptation will skip that bit. 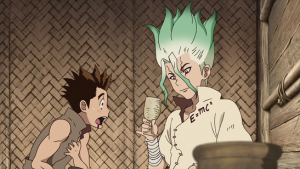 Dr. Stone premiere – Taiju is about to confess his feelings to Yuzuriha, the girl he’s loved since grade school, when a strange light appears in the sky and the entire human race is turned to stone. 3700 years later, Taiju is freed, to find that the only other human alive is his super-genius classmate Senkū. Senkū has two ambitions: find out what petrified the human race, and rebuild an advanced technological civilization within his lifetime.

Senkū is a walking encyclopedia with a combination of brilliance, drive, and overconfidence normally reserved for villains. In just this episode, he educates Taiju about foraging, winemaking, distillation, depilation, and some basic chemistry. Taiju says himself that he’s just big, strong, and dumb, but he’s a goofball with a heart of gold, and in flashbacks he and Yuzuriha look entirely compatible.

The flashbacks also reveal that there were early harbingers of the statue phenomenon. It was no singular arbitrary event occurring just to set the plot in motion, but the result of some process. It’s something which might eventually give up its secrets to science, as Senkū believes all things will.

So are you up for some STEM education, Shōnen Jump style? I sure feel like I am. 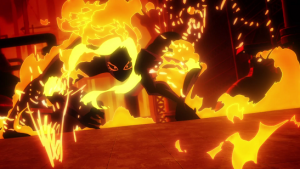 Fire Force premiere – Nearly two hundred years after Japan has switched to a new way of counting years, Tokyo is menaced by cases of spontaneous human combustion. Only these people don’t just burst into flames, they’re able to keep moving and try to set everything around them on fire. Ranged against them are people with better-controlled pyrotechnic powers. Yes, this show is literally about fighting fire with fire.

It is also about spectacular animation of all sorts of flames. Sakuga fans, this one is for you. There’s not a whole lot for anyone else, though. Hero Kusakabe Shinra has extra-special power and a tragic backstory which requires him to track down the pyromaniac who killed his family. A religious aspect to the firefighting draws mainly on Christian symbols, including the nearly obligatory nun. There are female firefighters, but they spend just as much time on display for fanservice as doing anything useful.

It’s a pretty package— okay, a spectacular-looking package— but containing a lot of the same old, same old. 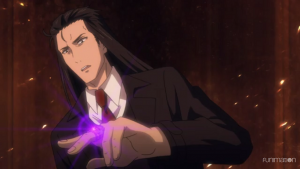 Demon Lord, Retry! premiere – Once again, a programmer is sucked into a game world he’s been helping create. After shutting the server down at midnight, he wakes up in the body of his evil high-level game character. As he adjusts to his new powers, he picks up one follower grateful that he isn’t being horrible to her, and by the look of the credits, will be accumulating many more, all young women.

Does this sound like an overtired premise constructed from pieces of other series? You’re correct. Can you name at least three specific series that were probably involved? Congratulations, you too have been exposed to far, far too many trapped-in-a-game-world stories. (Bonus points if you can name which character from a very popular show from a couple years ago the follower looks almost identical to.)

This at least isn’t terrible the way some similar shows have been recently. No one’s extolling the virtues of slavery, there’s no gratuitous rape or gore, and the main character isn’t a jerk. But when that’s enough to make a story seem good, it is time to give up and call this subgenre over. 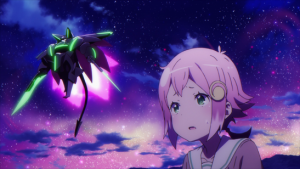 Granbelm premiere – Long ago, magic was real. But, seeing it used more and more for warfare, the seven most powerful mages took magic out of the world. Now, when the moon is full, their descendants hop into a pocket universe to summon mighty combat machines and fight… each other. Into the latest clash stumbles Mangetsu Kohinata, who only gets the barest outline of what’s going on before she is forced to realize her own powers and defend herself in spectacular fashion.

Much like To the Abandoned Sacred Beasts, there is a long backstory here. Completely unlike To the Abandoned Sacred Beasts, the premiere doesn’t try to introduce everyone and everything all at once. There’s a whole lot of “why” and “how” yet to be filled in, and Mangetsu herself is barely a sketch as yet. But enough is shown of the interactions between the combatants to get the viewer interested in learning more. 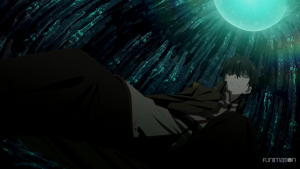 Arifureta: From Commonplace to World’s Strongest premiere – Hajime Nagumo was pulled into a gamelike fantasy world, but with totally unimpressive stats. Betrayed by someone on his team, he plunges into the darkest depths of a dungeon. Just barely escaping the fearsome creatures that roam it, he lies in the darkness and plots his revenge against all who have wronged him.

Actually, in the flashbacks, it looks like only a couple of Hajime’s comrades are jerks. Also, in his blind panic, he runs straight into a naturally occurring miracle cure. And then this turns out to be one of those stories where the hero has super-impressive stats. He just had to wait a bit for his chance at a massive power-up.

But, the story really needs Hajime to rage and turn against everyone, so sulk in the darkness he does. I have a feeling that if the source material had been written in English, the author would be a frequent user of phrases like “red pill” and “soy boys”. Everything is subordinate to the need to set the protagonist up as wronged.

This also suffers from the usual problems with trying to put a dark and serious fantasy in an overtly gamelike world. No amount of sercon is going to overcome a setting where people just pull something like a smartphone out of their pockets to check their D&D stats. 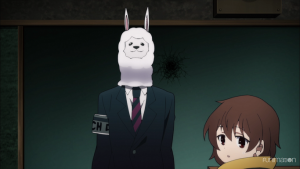 The Ones Within premiere – Akatsuki Iride is a gameplay video maker specializing in escape games. After receiving a mysterious invitation, he’s suddenly sucked into a world where he and several other Let’s Players are given a simple task: play a survival game until they get 100 million viewers… or be trapped forever.

Does that sound dark? It’s not nearly as dark as it sounds. Akatsuki’s first task is solved by bonding with his apparent enemy over their shared allergies. In fact, he overcomes several obstacles by making friends in unexpected ways, so my one concern is that if this show doesn’t let someone else into the spotlight soon it will get awfully repetitive.

This premiere may even bring out a few chuckles, though it’s more sitcom-y than joke-y. Underneath it all, it seems like it may have a few things to say about the YouTube economy. I think it’s worth a second look.

So, we’ll cue up Astra Lost in Space, Dr. Stone, Granbelm, and The Ones Within for a second look. But first, we’ll take a look at the remaining premieres next week, and bring back Demon Slayer to give it a chance to hold on to its place in the lineup.