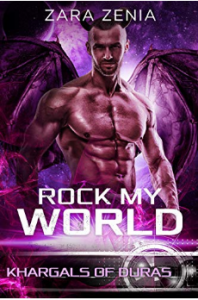 A look at some of the hot new science fiction romance stories released in February!

Seven well respected SFR authors joined together on a collaborative world known as the Khargals of Duras. Here’s the high level explanation of the authors’ concept: A thousand years ago, a Khargal scouting party left Duras, only to crash on a planet called Earth.

Injured and outnumbered, the stranded Khargals hid among stone effigies and observed the slow evolution of the planet’s primitive inhabitants. With no means of returning to Duras, they watched from their shadowy perches and faded into legend, becoming the mythical gargoyles.

Until today. Long after any hope for rescue had died, the distress signal has finally been answered.

Zara Zenia’s entry in the series, Rock My World, has collected the most reviews so far, so I’ll share her blurb: The gargoyles who fell to Earth have perched and secretly observed humans, but the Rose Syndicate’s threat to use garg technology to create super weapons means the gargs must act before humans pay the price.

Mogul has suffered for years, both at the hands of his fellow gargs and with the losses of the humans he has let into his heart. Never again. With the help of his only two friends, Mogul is determined to take down the Rose Syndicate and get off this planet. The last thing he needs is emotional entanglements, and his injured wings prevent him from injecting the mating serum even if he wanted to.

Kira is determined to unravel the mystery surrounding the objects found at the archeological dig near her childhood home. Science has always been her friend, something to keep her company during all the lonely nights when her father’s absence was felt so strongly, it sent her running to seek comfort with the stone gargoyles on the roof.

When Kira discovers Mogul’s sigil at the dig site and her father and the Rose Syndicate threaten, Mogul must swoop in to rescue the girl he’s watched grow into a beautiful woman. Fighting the threat against humanity along with his growing attraction for Kira is no easy task, but Mogul must do both to reach his ultimate goal—home.

Even if Kira is his mate, what can a damaged garg like Mogul offer? And with the ships from home only days away from rescuing the gargs from Earth, can Mogul take down the Rose Syndicate without losing his heart in the process? 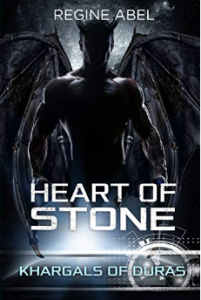 To highlight another in the series, Heart of Stone by one of my go-to authors, Regine Abel has the following plot: When death nearly claims Brianna at the tender age of eight, a being that shouldn’t exist saves her. Twenty years later, she becomes an architect specialized in historic buildings, still searching for evidence that the one who saved her—the one who haunts her increasingly wild dreams—truly exists. When a mystery man hires her for a major project in the catacombs of an old church turned exclusive, gothic nightclub, Brianna believes she may have her chance at long last.

Alkor has grown weary of this era. Forced to hide in plain sight, forbidden from ever claiming the only woman to have stirred his mating instincts, he considers going back into hibernation rather than pining for her from afar. But the sudden activation of the beacon changes everything. Rescue is on the way! With his only means of reaching the rendezvous point trapped in the catacombs, Alkor hires Brianna to help recover his treasure. However, his lost sigil isn’t the only thing he intends to take back home with him.

Time is running out, and the evil forces conspiring to capture him will stop at nothing to achieve their goal, even using Brianna. Did Alkor save his true mate only to lose her now that they might have a chance at a future together?

The other titles in the series are Taken for Granite by Nancey Cummings, Gravel and Grit by Stacy Jones, Etched in Stone by Abigail Myst, Sticks and Stones by Tamsin Ley and Hard As Rock by Stephanie West. 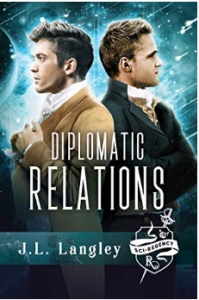 For a complete change of pace, you can try Sci-Regency 4— Diplomatic Relations (The Sci-Regency Series) by J. L. Langley. The story: Dalton Fairfax, Lord Ashbourne, has always flaunted the rules of Regelence high society. Despite being the heir to the Marquess of Ravensburg and cousin to the Townsend princes, Dalton found his calling in the military, first in the Intergalactic Navy and now the Regelence Special Regiment. Finally home, in the same city as the parents he seeks to avoid along with a painful past, Dalton jumps at the chance to help his planet by taking on the role of bodyguard to the heir of the Duke of Eversleigh.

Blaise Thompson, Viscount Redding, strives to prove himself worthy of carrying on the Eversleigh legacy as the next Regelence IN council member. Maintaining his stellar reputation isn’t easy for Blaise, especially while keeping his outrageous younger brother in line and foiling his rival’s personal attacks. Ever conscious of living up to his responsibilities, Blaise has no time for romance, not even with a lusty special forces soldier.

But opposites don’t just attract… they sizzle. And when the only way to stop a scandal that threatens them both is to compromise their principles, Blaise and Dalton are forced to confront the risk of losing everything… even each other. 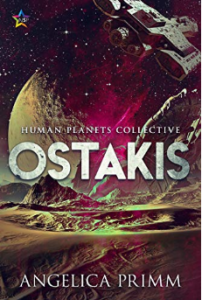 Then there’s Ostakis by Angelica Primm, which was one of those books where I got hooked while reading the ‘Look Inside’ feature and had to one click. It was a very intricately drawn, fast moving story and I thought the world building was terrific. The blurb: The Human Planets Collective sent young Ambassador Kaj Deder to the former colony planet Ostakis to establish relations. But in the twenty-five hundred years since Earth lost contact with Ostakis, the people of that colony have dramatically changed. Kaj is tasked with finding the reason for these changes while he forges trade links between the HPC and Ostakis. Without trade with the HPC, the dwindling resources of Ostakis will ultimately end human life on the planet. But his mission faces a huge obstacle in the form of Most Reverend Thyenn Sharr, the head of the Faith Progressive Church, who sees the arrival of Kaj as the beginning of the end of the Church. Kaj’s powerful attraction to Trademaster Klath’s son, Arlan does not smooth relations.

Arlan Klath, the son of the Trademaster of Ostakis, bears the secret that the pious people of his planet want to hide from the homeworld and the HPC. The Curse of the Unspoken, wrought through the unspeakable acts of the First Colonists, afflicts all Ostakians, but some more strongly than others. Arlan is totally Cursed, considered born sinful and he lives without legal rights or property. He is scrutinized by Sharr who is enraged that Arlan’s father defiantly refuses to submit Arlan to a cruel act to “redeem” Arlan’s soul. The stakes increase when Arlan and Kaj form a relationship that Thyenn Sharr considers ample justification to usurp the Trademaster position through the power of his Church. 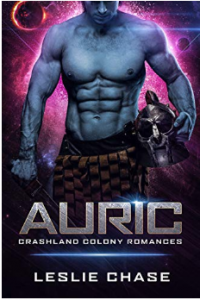 For a book I totally loved, in part because the author took a number of SFR tropes and stood them on their heads, try Auric (Crashland Colony Romance Book 1) by Leslie Chase. I’m eagerly awaiting more in this well written series. Here’s the plot:  Crashed on an unexplored planet, with only an alien warrior and a holographic cat for company… what’s a girl to do?

Tamara expected the trip to Arcadia Colony to be safe and boring. And it is — until an impossibly hot alien warrior crashes into the ship, bringing a warning that only Tamara believes. Helping the rugged alien means mutiny… but the threat he’s warning about is worse.

Auric turned his back on the Silver Band when they abandoned honor in favor of piracy. Drawn by the riches of the colony ship, the Band are on their way — and once they arrive, the humans are doomed. Now that he’s met Tamara, Auric knows he can’t let anything happen to her. She’s the woman fate has chosen for him, the woman he would give his life to save.

When the humans and their alien attackers are stranded on a forbidden planet, Auric and Tamara are flung together on a journey to find other survivors. Will fate be enough to keep Auric and Tamara together? Or will the dangers of the planet tear them apart? 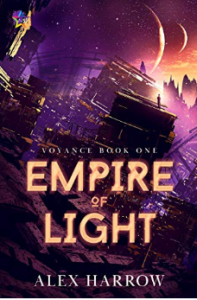 To finish up with some space opera SFR, there’s Empire of Light (Voyance Book 1) from Alex Harrow. The story: Damian Nettoyer is the Empire’s go-to gun. He kills whoever they want him to kill. In exchange, he and his rag-tag gang of crooks get to live, and Damian’s psychokinetic partner and lover, Aris, isn’t issued a one-way ticket to an Empire-sanctioned lobotomy.

To protect his friends and save his own skin, Damian teams up with Raeyn to make his revolution work. As Aris slips away from Damian and his control over his powers crumbles, the Watch catches on. Damian gets way too close to Raeyn, torn between the need to shoot him one minute and kiss him the next.

With the Empire, Damian had two policies: shoot first and don’t ask questions. But to save the guy he loves, he’ll set the world on fire.

See you in March with more new SFR releases for your reading enjoyment!

I kinda like the Best Dram Pres Long Form ballot this year. It’s a varied one, has one fairly good-sized surprise, features some obvious choices, and has a two-horse race as I see it. That said, there is a ballot that I see in my head that is much different, a certain grouping that goes […]

The DC Universe Animated Original Movies have, for the better part, been pretty successful, due primarily to their high levels of enjoyment and excellence. However I can’t find it within me to say the same for ‘Superman: Unbound’, the latest in the series (apologies for a late review: read; life). The story-quality varies from intense […]

NOT QUITE SWORD & SORCERY: EARLY FANTASY