The Fantastic Four is a victim of auteurism 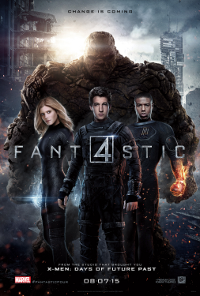 There are probably as many people who believe effects heavy adventure films are the unfortunate necessity of the modern film business as believe they are its pinnacle (or at least most entertaining option, which may be the same thing) but if the last decade has proven anything it is that a determined filmmaker with the right material and the right inspiration can appease both groups (or come as close as possible). Josh Trank’s FANTASTIC FOUR is not that film, but that fact should not be used as the object lesson it may be doomed to become in how not to make one of these movies or why there should be fewer of them. Quite the opposite, in fact. For all the studio hands visibly apparent in the frequently incomprehensible FANTASTIC FOUR it is still an auteur’s film right down to the symmetry in experiences between co-writer/director Trank and young Reed Richards (Teller), both of whom are destined to achieve unexpected early success – Trank with his first film, Reed with a prototype interdimensional teleporter – which open the door to both immensely larger opportunities and immensely larger (and unseen) dangers.

Quickly snapped up by the mysterious Baxter Foundation, Reed and a host of talented young geniuses put their minds together to solve the greatest problem of all time – reaching and exploring new worlds – and garner all the awards and accolades which go with such a feat. Staying true to his oft-repeated mantra of a grounded, realistic depiction of the well-known origin of Marvel’s first super-team, Trank starts local with the difficult upbringing of Reed and best friend Ben Grimm (Bell) while laying down the nuts and bolts aesthetic designed by Chris Seagers (and eventually re-designed by Molly Hughes in the films much discussed re-shoots). Nuts and bolts in the most literal sense of the world because while Trank (with co-writers Simon Kinberg and Jeremy Slater) creates often subtle but solid relationship strands between core characters – from Victor Von Doom’s (Kebbell) simmering jealousy of both Reed’s intellect and rapport with equally brainy Susan Storm (Mara) to often lone adult Professor Storm (Cathey) and his attempt to reach his estranged son Johnny (Jordan) – it spends more time on actual nuts and bolts, showcasing endless scenes of characters welding things or staring at computer monitors rather than conversing with one another. The result is a pretty and occasionally interesting relationship drama with an interminable pace made all the more noticeably turgid, as the first act building up to the activation of Reed’s device takes up fully half of the film’s brief 100 minute run time with little to show for all the time spent beyond squashing the rest of the film into shape which cannot possibly make sense. Still it is within these sequences more so than any other portion of the film where Trank’s hand shows through most firmly, suggesting inherent problems completely separate from any studio mandated reshoots and which gives something of the lie to the notion that an auteur given free rein to bring what they see in their heads to life without interference or compromise (surely the dirtiest word in the arts) must produce better work than lowest common denominator focused studio creations.

And there is some material in FANTASTIC FOUR which backs up that idea. When Reed and his team decide to use Reed’s device themselves, and get transformed into various painfully monstrous creations for their trouble and youthful exuberance. Despite some of the clumsy storytelling needed to reach that point – from bringing a largely absent Ben Grimm back into the proceedings for no discernible reason than he has to become The Thing, to the classic alien planet exploration technique of poking glowy-things and being surprised when they explode – the Four’s discovery of how they’ve changed is played up with a mixture of horror and occasional pathos which works amazingly well, briefly suggesting the hints of interest in the first half are about to bloom into a fully developed epic of type which truly has not been attempted before. Alas, it’s not to be. Like anything having to do with art auteur theory is wrong as often as it’s right; unfiltered, ill-considered works devoid of feedback or editing can fall apart just as surely as the most work shopped piece of lowest common denominator ‘entertainment’ and FANTASTIC FOUR does that with surprising speed. Yes the next twenty minutes or so run through with amazing speed and little consequence as character and relationships and frequently logic takes a back seat to getting individuals where they need to be for the quickly approaching third act. But as problematic as that is, it’s neither better nor worse than the slow and empty work of Trank’s first half (they both spend quite a lot of time watching young people stand around inside of a warehouse, which is not usually the first thing that comes to mind when imagining a FANTASTIC FOUR film). The reality is, good art and bad come from the same place (and usually from the same positive intentions) and there is no real way to determine which you are going to get from one moment to the next; it’s a roll of the dice and the odds are against us but that’s okay because like a gambling addict we love the action as much as the winning.

Though he won’t admit it, it’s a feeling which Reed likely understands as he abandons his friends and goes on the run, trying to figure out how to undo what his machine did while the military gleefully snaps up the remaining super people it has access to with plans to use them to solve all of their thorniest problems … beginning with the capture of Reed himself. It’s slow and turbulent (a side effect in part of the film’s determined fight against humor – after the half point there are no intentional jokes, and few before then) but ripe with promise for infighting among the Four and their handlers making the formation of the team less of a foregone conclusion. And it is tossed out the window almost as soon as it is brought up as the film, perhaps realizing how slowly it has been moving, picks up speed faster and faster, racing towards it literally knows not where. The rapidly … let’s be generous and say evolving … plot expands so quickly arbitrariness becomes the name of the game, embodied primarily by Cathey’s Professor Storm who exists primarily to tell any character what they need to hear in order to get where they need to be for the big finish even if it means contradicting what he said. In a film full of rock men and invisible women the greatest super power of all must be Professor Storm’s ability to convince people he is the voice of moral authority even though by the start of the third act it must be clear to even the most lax of observers that everything he says is wrong.

[Take for instance his assertion that the twenty-year-old geniuses who built the teleporter and are presumably the only people who know how to fix it if it breaks are just the people to test it out the first time. One imagines Werner Von Braun’s reaction if told while working on the Saturn V that, once he got it to stop exploding, he would be the one piloting it.]

But like a boulder careening downhill, there’s no time to think too much of such things; the extended first act means there’s a lot to do in the second half causing the film to essentially jump straight to the finale as Doctor Doom suddenly reappears and begins busting heads with his brain in the film’s last gasp of effecting and original superhero storytelling before it devolves into a panoply of computer effects and stunt sequences as Doom prepares to wipe out the planet for … some reason. Actually, that’s not fair – he has a completely understandable reason, it’s just stupid [having in his view put the planet Earth on an unalterable course to become uninhabited, having access to teleporter technology makes it inevitable the human race will do the same to the featureless mud ball he has claimed as home, so he will do to them first]. Not that there is much time to sit around and ponder such things as the speed of action continues to pick up in the quickly arrived finale, sweeping the newly minted Fantastic Four into a glowing vortex in order to face Doom on his home turf in a replacement climax which is so tonally discordant from what has come before it is possible to pinpoint to the second the point where the reshoots were spliced into the original story. With what little in the way of character work thrown out the window FANTASTIC FOUR quickly falls back into the old action film standby of hurling a chunk of visual effects at the screen in an effort to create some sort of reaction. Normally complaints about CG heavy action sequences looking like a video game are the work of a lazy mind reaching for a phrase which is familiar and roughly describes the sensation the writer is going for while in no one describing what is actually on screen and mostly has to do with a persistent prejudice against CGI. That said, not since probably ESCAPE FROM LA has a cast of actors been so obviously standing on a sound stage in front of a giant green screen than the FF when they arrive on Planet Zero. It’s not hideous, just extremely mediocre like so much else in the film.

Which probably sounds like a damning condemnation of FANTASTIC FOUR and a warning to stop assailing us with bad versions of the characters of which we have now suffered through four terrible iterations. Certainly many are taking it that way, but that’s the worst way out in a medium where, failed reboots notwithstanding, there is always room for another look. While the odd bad result can sometimes lead to questioning the entire enterprise – particularly in a genre where (for various reasons) the odds of success are even lower than the mean – if the occasional terrible film is the price we pay for the occasional great one then not only was the attempt worth it, but it’s worth trying again.

Loyalty and dedication is what makes fandom so strong. So when a story comes along highlighting all of fandom’s clichéd elements, we can’t help but smile, nod, and agree.