Autumn in New England serves to transport me immediately into a Halloween world – where one finds Vampires. In Anime!

It is now officially autumn, which means that I’ve decided to go ahead and start something I’ve been wanting to do for a while: A series concentrated on the spooky, scary, horrific, and macabre within the animanga world.  My original intention was to only cover such topics within the month of October, but autumn in New England only serves to transport me immediately into a Halloween world (though if I’m being perfectly honest, I’m passively in the mood for Halloween every day of my life, and I’ve been actively in the mood for Halloween since mid-August).

The first topic I want to cover, that of vampires, is something that’s been very popular and controversial in popular culture lately.  I’ve been a big fan of vampires since I was a very young child, probably because of an intense admiration of the bat.  But when I was in mid-high school, Stefanie Meyer published Twilight and set off an enormous flood of vampire media.  I actually read Twilight in high school, not long after it had first come out.  It wasn’t my favorite book, but because it hadn’t quite gained the huge hype yet, I just kind of wrote it off.  I already knew how I felt about vampires, partially due to their prevalence in the form of anime.

The character of Vincent Valentine (Final Fantasy VII) notwithstanding, my first introduction to the Japanese interpretation of a vampire was probably in the film Vampire Hunter D: Bloodlust (Urban Vision Entertainment, 2001).  The titular character, D, is part of a series of novels written by Hideyuki Kikuchi and illustrated by Yoshitaka Amano since 1983.  These novels have been interpreted into a few anime movies and a manga series, with an anime series and a live-action film in production, all of which revolve around/will involve his mysterious parentage and his personal struggle to hunt and kill vampires while he, himself, is half vampire (he was born of a human woman impregnated by a vampire, a being known as a “dunpeal”).  Bloodlust is the most recent of the anime movie installments, and it is spectacular.  All the time-honored tropes of burning up in sunlight, turning into bats, and not having a reflection are there; and though the vampires are never glorified for their superhuman abilities (such as they are in Twilight, for example), they are treated with great sensitivity, and as complex characters.  Plus, the world that D inhabits is a dark, cyberpunk wasteland future where monsters are commonplace – so D always has a job to do.  Tie all this together with character designs by Amano and an absurdly catchy theme song by the J-pop band Do As Infinity, and Vampire Hunter D is sure to please.  Fair warning: This movie contains some pretty graphic violence and gore, mostly in the form of rivers of blood. 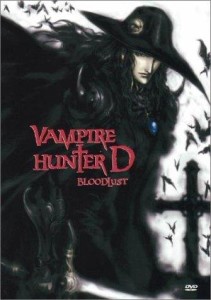 Skipping ahead several years to my most recent vampire obsession, we come to Hellsing, originally written by Kohta Hirano.  I’ve only read the first volume of the manga, but I’ve seen the entire original anime and am currently working on the updated anime/OVA, Hellsing Ultimate.  Please don’t be mistaken; this series has very little, if anything at all, to do with Stoker’s character Van Helsing.  Rather, the story focuses on the Hellsing Organization, whose mission is to keep Britain safe from the undead.  To do this, the organization’s leader, Sir Intergra Hellsing (yes, she is a woman, and yes, she is an extraordinary leader), employs a tall, perpetually-grinning vampire called Alucard.  Evidently, Integra believes in fighting fire with fire.  Hands down, my favorite thing about Hellsing on the whole is that Hirano-sensei is entirely unafraid to make Alucard as heinously creepy as possible.  His limbs seem to be made of rubber, for he is constantly stretching up tall to intimidate his enemies; his hair is probably a sentient being, for it changes from being short and straight to long and wild between frames; his mouth, well…a vampire’s mouth is an extremely important tool, and it doesn’t need to obey the human laws of physics and possibility.  Couple Alucard’s constant metamorphoses with Crispin Freeman’s voice in the dub, and you have all the bone-chilling creepy fun you could possibly need (Hellsing is far less serious than Vampire Hunter D – by a long shot).  Not to mention that, once again, all the stops are pulled out where the gore is in question, since the vampire battles are punctuated with rapid gunfire from the Hellsing army (and Alucard uses a pretty sweet piece himself).  The Hellsing Ultimate OVA is a beautiful bloodbath, and one of the only anime that I’ve seen successfully pull of using minimal computer graphic effects. 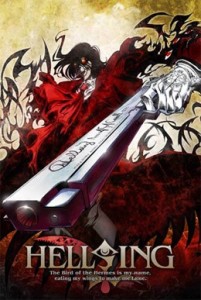 For those of you who are looking for something maybe a little less graphic but with some fun vampire spirit, let me briefly touch upon Nyanpire.  I’ve only seen a couple episodes of this silly cartoon myself, mostly because I couldn’t handle the saccharine-cute. Suffice to say, Nyanpire follows the story of an adorable black kitten who is rescued by a vampire, who allows said kitten to drink some of his blood.  Thus, the dreaded Nyanpire is born.  The series is a little silly and fluffy, but that’s all it’s really meant to be.  One of the great selling points in my mind is that the anime was actually based off of a doujinshi, or a self-published comic book by artist Yukiusa.  The fact that an underground comic could become popular enough for Gonzo to make a little series about it is pretty impressive.  Also, the first episode is entitled, “I Want Blood meow.” 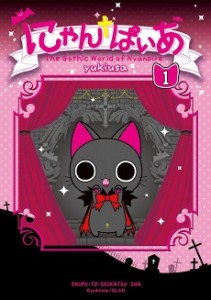 There are actually a plethora of vampire animanga to choose from, and there’s no way I can get to them all here.  A couple of my other favorites include Vampire Princess Miyu, which has a very traditional Japanese feel to it, and Nightwalker, which is about a vampire private eye (and which also has an incredible opening theme song performed by BUCK-TICK)!  Aside from those, there are such titles as Vampire Knight, Rosario + Vampire, Trinity Blood, Blood: The Last Vampire, Dance in the Vampire Bund, Black Blood Brothers, Don Dracula, Master Mosquiton…apparently, the blood-sucking fiends have found a happy home in Japan!  And these titles range from your teenage vampire romances (Vampire Knight) to your all-out splatter fests (particularly Hellsing).  Don’t let the Twilight generation get you down; vampires have always been awesome, and will remain awesome for many years to come, in all forms of media.

With the Sailor Moon relaunch just a few months away, I seem to be seeing an onslaught of magical girls in the media.

In this week’s viewing: Kagewani is still scary, Gundam is still fighty, and more!