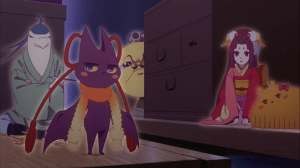 We Rent Tsukumogami premiere – Busybody O-Kō and space case Seiji are adopted siblings who rent out curios to the well-to-do of Edo (pre-1868 Tokyo). Because of their expertise, a local samurai comes to them for help tracking down a valuable family heirloom, a netsuke in the shape of a mouse which has seemingly come to life and scurried off on their own. Don’t know what a netsuke is, or how objects come to have souls? Don’t worry, the narrator will be along shortly to explain.

To make up for its late start, the first episode of We Rent Tsukumogami rushes through enough material to power three or four. It introduces the siblings and their whole collection of tsukumogami, visits the noble houses and the red-light district of Edo, and uncovers a whole soap opera going on around the vanished netsuke.

As long as the pace settles down now, there is nothing else to complain about. If you love a good historical costume drama, I don’t think We Rent Tsukumogami will disappoint. Definitely this gets at least one more episode. 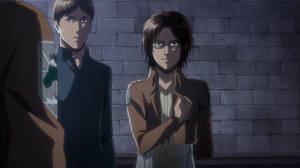 Attack on Titan #38 (Season 3 premiere) – Just as the Survey Corps is beginning to piece together what’s really going on around them, new enemies emerge. Their informant from the Church of the Walls is tortured and murdered, and Hange escapes an ensuing purge by the skin of eir teeth to warn Levi’s squad. (Based on the clues we have from the author and English-language manga publisher, my best guess is that Hange is agender, so I’ll be using Spivak pronouns for em.) Then the squad, which is currently sheltering Eren and Historia, has to make a break for a border town, then foil a kidnapping.

Last season was about learning who the true enemy beyond the walls was; this one starts off with new internal ones being revealed. Someone within the ruling class is so concerned with hanging onto power that they’re willing to try to silence everyone. At least, I hope it’s just about hanging onto power. The alternative is that someone is working from the inside to get everyone within the walls killed.

This season looks to be one hell of a ride. None of the first-season pacing problems are apparent; this is much more like the second. And even though it’s starting late, we’ve been promised that it’ll run until December this time. Buckle up, everyone.

Here endeth the premieres. Well, except for the one that won’t be showing up for another couple weeks. If it gets licensed for streaming, I’ll cover it then. But in the meantime, it’s really way past time to set at least a provisional lineup. So, onward to our returning candidates… 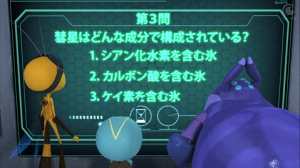 The Journey Home #3-6 – Midge, Doc, and Marbo are the only insects remaining on the station, but there are also some frogs only too happy to explain why before eating them too. Realizing that the station could become uninhabitable at any moment, our heroes battle through variable gravity, inexplicable user interfaces, and pop science quizzes to reach a supply ship, which is still there because whatever drove the crew off the station was some kind of catastrophic emergency. And then Marbo is nearly left behind due to a physical dysfunction stemming from a traumatic even in his past.

Boy, if this show weren’t about friendly cartoon insects, it would be the grimmest thing I’ve seen all year. I mean, cannibalism, torture, and mass executions, with a possible apocalypse in the background? And we’re only the equivalent of three episodes in?

This show may be 95% fluff, but it’s easily the most interesting thing the summer season has turned up, and I definitely think we need to find out where this winds up. 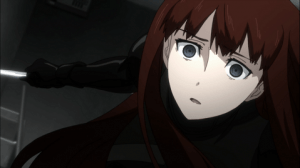 Steins;Gate 0 #13-14 – Kagari mysteriously vanishes, then briefly appears as one of the mysterious masked attackers. Suzuha, Moeka, and Maho start assembling more pieces of the puzzle, with Suzuha aiming to finish what Okabe has abandoned.

The original Steins;Gate had many fine qualities, but it was, at the core, a Guy Solves Everyone’s Problems For Them kind of story. Steins;Gate 0 has distinguished itself by giving the rest of the cast, Suzuha and Maho in particular, the room to come up with their own solutions. In fact it may be an Everyone Returns the Favor sort of story in the end.

But if there’s one point these episodes really make, it’s that everyone is even more screwed than previously suspected. Kagari is indeed a clone of Kurisu guided by the data from Amadeus, but not just that, she was brainwashed by an older Leskinen before she traveled back in time. Meaning he’s on to Okabe and friends, he’s always been on to them, the big dumb American idioting is just an act, and we have a second time loop going on.

Moreover, if Leskinen is also the one gathering information on the time machine, then we have a paradox of the sort that was explicitly stated couldn’t happen— travelling back in time machine leading to the development of the time machine— and that should definitely alert everyone that something fishy is up with this timeline. 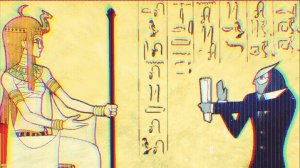 Persona5 the Animation #14-16 – These episodes give us the whole range of Persona5: an episode of random screwing around with side stories, then back to solid character drama with the next high-profile job for the Phantoms and some fantastic art when they make it into the next Palace.

Ren’s family friend has something of a habit of taking in stray kids with troubled pasts. His previous acquisition is a girl still struggling with her mother’s suicide and falling into the hikikomori (shut-in) lifestyle. Like the typical anime hikikomori, she’s a computer whiz; unlike a typical one, she desperately wants to overcome her fear and rejoin society.

So Futaba calls in a hit on herself, offering to pay by using her skills to fend off a fictional version of Anonymous which has conveniently just arrived to start threatening Japan if it doesn’t hand over the Phantoms. It’s a great way to change things up now that we have expectations about how the narrative will repeat. 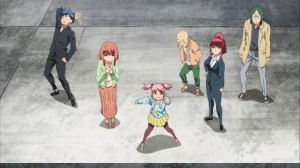 Planet With #2 – It’s time for Sōya’s mysterious guardians to provide a little explanation, so they do: Interstellar society is arguing about whether to imprison humanity forever, and they’re from the faction arguing that humans can still be persuaded to embrace true pacifism. The giant floating stuffed animals are sent by the other faction, I guess to provoke humans and make the argument that we’re too dangerous. This is why Sōya has to confiscate the magic mech weapons, and also probably why there’s such a big deal being made about him not eating meat.

Sōya’s opponents are all being set up as anime hero tropes, apparently so they can all be deconstructed and made to look pathetic. Well, except for the voraciously meat-eating (thus obviously evil!) old guy, I don’t think I’ve seen him before.

I give Planet With points for trying to make the opponents sympathetic, but it’s already way too obvious who the author thinks is right and why, and everything about the plot looks like a machine constructed solely to force all the characters to agree. And another thing the author thinks is that Cat-Sensei’s upskirting is a joke that never gets old. I think maybe we can leave this one here.

Against all odds, we might go through this season for a full lineup! I’ll include We Rent Tsukumogami if it doesn’t fall on its face in episode 2, The Journey Home is definitely in, and I see no reason to give up on Steins;Gate 0, Persona5, or Attack on Titan.