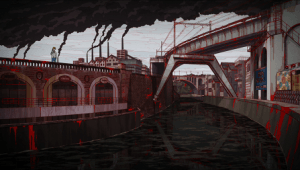 The Eccentric Family 2 #6 – Back at the Friday Fellows, the club has gotten annoyed enough by Yodogawa’s tanuki conservation campaign to kick him out and install a new member. Banished to a forest research station after an uncomfortable allegation (thanks for helping encourage the myth that most harassment accusations are false, Mr. Author!), Yodogawa is then further sidelined by Temmaya, who seems to be working his way back into the good graces of Jurōjin. But he leaves behind a tip which means Yasaburō is absolutely forced to go and enjoy himself in the resort town of Arima.

At least it’s enjoyable until he learns that the new member is, ironically, a tanuki. It’s his treacherous uncle Sōun Ebisugawa, who was, if not the actual killer, the person mostly responsible for Yasaburō’s father being eaten by the Friday club.

And then all that is forgotten momentarily when Yasaburō finds himself trapped in Jurōjin’s painting of Hell. And wow. The Eccentric Family‘s art has always been top-notch, but it excels with the most picturesque industrial wasteland ever.

And it turns out Benten is present here too, as she seems to be everywhere in this story. In a way I think this series is her story, just as the first The Eccentric Family was really about Sōichirō Shimogamo, even though he was long dead. 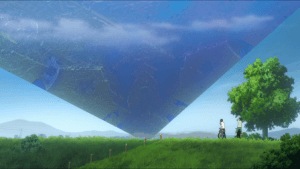 Kado: The Right Answer #6 – Everyone’s been patient with the fact that a giant alien cube has shut down the busiest airport in Japan, but once all the humans are extracted from it, the government would like zaShunina to move it along. Because adjusting to only three dimensions is tricky, zaShunina would like to keep Kado in contact with the planetary surface. Unfortunately, this means moving an alien construct which can cause mental problems on contact through the biggest metropolis on Earth.

This sets the stage for a moment of great nationalistic pride, though you may not recognize it. Japan is better prepared than any other country on this planet to logistic the crap out of a situation like this. After decades of getting ready for massive earthquakes, simply shuffling a few million people out of the way of a giant alien die roll would be a walk in the park by comparison.

On the flip side, you can also see the Japanese culture of overwork in this episode. When Shindō is still frantically working at his laptop while everyone else is taking a breather, and then he admits that he hasn’t had a day off in a while, that isn’t about showing how dire the situation is, but to reinforce that he is the hero. It’s also there in Hanamori’s welcome as the last person out of Kado: you’ve been trapped in a crazy zone of altered physics for a month, but to show how much we appreciate you, here, have a copy of the checklist so you can participate in tomorrow’s big operation! And zaShunina’s decision that the need to sleep is the second most pressing problem facing humanity is very much in line with a Japanese perspective. 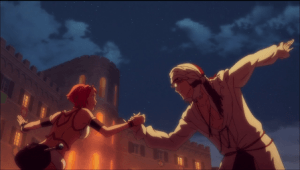 Rage of Bahamut: Virgin Soul #6 – I suppose we aren’t going to find out why for a while, but it seems that Charioce likes to periodically cover his head, bare his chest, stare grimly at a tombstone for a while, and then go out among his people incognito. I’m guessing there will eventually be some backstory to explain that he deeply cares for his people and is only committing genocide against the other sentients of the world because some terrible childhood incident taught him that coexistence was impossible, you know, the usual.

But for now, it gives him a chance for another Meet Cute with Nina. The rich dude she and Mugaro took down last week is back with a crew of thugs, which would be no problem except he has somehow managed to recruit every totally hot thug in town. After Charioce gets to be the hero, one thing leads to another and suddenly he and Nina are having a date on Big Parade Eve, enjoying the anachronistic stew of music, dancing, and suggestively shaped foods.

Things Charioce knows about Nina now: she’s freakishly strong and fast, and she’s a good buddy of Bacchus and some other shady characters. Things Nina knows about Charioce: she can occasionally look at him and not turn into a dragon. Which suggests that maybe she’s gaining some control over her difficulty. She also doesn’t seem to react to Azazel at all now, which may be a bit problematic for the plans for the slave revolt. 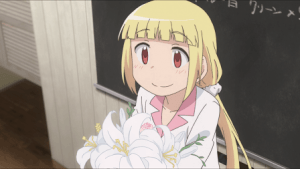 Alice & Zoroku #6 – Finally everyone gets a chance to settle down and have a nice little quirky family comedy. It’s all slice-of-life this episode, with absolutely nothing dark or terrible lurking in the background. Well, other than the vague hinkiness of the yakuza boss getting engaged to someone who appears to still be in high school. And Sana being new to concepts like “family”. And, ummm, we never did get confirmation on what really happened to the pig, did we?

Not much to talk about here; it’s just a moment to stop, take a breath, and reset before things start getting seriously weird again. 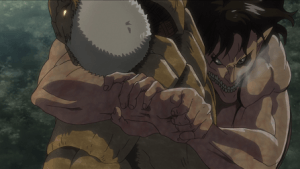 Attack on Titan #32 – Time for a full-on Titan MMA smackdown! With Bertolt out of the way, safeguarding the other kidnappees, Eren and Reiner are free for a one-on-one no-holds-barred rumble.

It’s at this point that Eren realizes that all his comrades who have turned out to be Titans were really good at hand-to-hand combat. In retrospect, it’s obvious why. But by training only to fight other Titans before infiltrating Eren’s society, the invaders have failed to account for the possibility that non-Titan humans might also be able to help somehow. This lines up with the Beast Titan’s surprise at learning about the maneuvering gear; he’s the first Titan to return back over the walls with news about it.

But humans can help, even if they take a little while to figure out how. This probably worked a lot better when it was line drawings in the source manga. With Reiner’s Titan form colored in, it looks odd that Mikasa keeps hammering on the armored plates for as long as she does, when the exposed flesh is standing out like a big sign reading “INSERT SWORD HERE”.