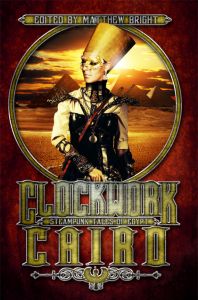 The charm of Steampunk resides primarily in the boundless possibilities of the imagination when combining historical elements with science fiction. The speculative mind of some of the most creative writers seems a comfortable fit for the genre when allowed to expand to a time and space outside of Victorian London. In the soon to be released anthology Clockwork Cairo from Twopenny Books, Editor Matthew Bright has compiled a stellar collection of stories with the gothic nuances of Steampunk and the exotic grandeur of Egyptian lore.

As Bright pointedly explains when defining that which he sees as Egyptian Steampunk, “I wanted the voices that are too frequently forgotten, the voices so frequently untold, and the voices often missing from history.” So, fans of clockwork literature rest assured, these pages are filled with adventures of airships and parasols and gear-driven mechanisms and noted historical participants like Nikola Tesla and popular characters like Sir Maurice Newbury and Miss Veronica Hobbes.

Readers will be pleasantly entertained with the robust collection of stories, including:

The Curious Case of the Werewolf that Wasn’t, the Mummy that Was and the Cat in the Jar by Gail Carriger (The Parasol Protectorate, Custard Protocol, Supernatural Society, and Delightfully Deadly)

The Angel of Khan Rl-Khalili by P. Djeli Clark

The Lights of Dendera by Tiffany Trent (The Unnaturalists, The Tinker King)

Ushabti by Zan Lee (The Museum of Horrors)

Thermodynamics; and/or The Remittance Men by Chaz Brenchley (Bitter Waters)

The Sun Shall Lie Across Us Like Gold by Benjanun Sriduankaew (Scale Bridge, Winterglass)

The Word of Menamhotep by George Mann (Newbury and Hobbes series, Ghosts of Manhattan)

Jabari and the Giant by Christopher Parvin

The Infernal by Anne Jensen

Imhotep’s Dog by John Moralee (Acting Dead, Journal of the Living, The House on Willow Lane, The Bone Yard and Other Stories, and Edge of Crime)

But For The Pieces He Left Behind by E. Catherine Tobler

If forced to select just one, perhaps writer Rod Duncan’s short story, The Museum of Unlikely Survivors (see artwork on right) best epitomizes the overall work found in Clockwork Cairo. According to one of the story’s characters, “A museum – any museum – is a repository of unlikely survivors.” This book is indeed a gallery of worthy tales that also deserves to be put on display. The word “unlikely” is what one might think when first considering merging Steampunk with Egyptian lore, but just as in the plot of Duncan’s piece, readers will soon discover that many mysteries lie beneath the surface, and things we never thought possible suddenly become imaginable.

Each contribution is introduced with a scene-setting illustration from Inkspiral Design who also provided the colorful artwork for the cover. Reminiscent of the movie posters so often shadowed by the bright theatre marquees, each image draws the readers in with the same type of cliffhanger enthusiasm and stylish couture.

Clockwork Cairo is a fun collection of clever adventures, delicately mixing the mysterious and exotic worlds of Egyptian legend and the raw ingenuity of Steampunk. Editor Matthew Bright proves once again that the genre can truly go anywhere at any time.