A few recommendations from some of the greatest minds in the industry of what you should be reading. 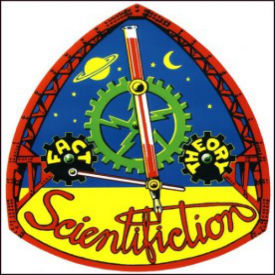 (Editor’s Note:  Part 5 of Mr. Troughton’s Ultimate SF Reading List was inadvertently published on Wednesday.  What should have been published was Part 4, the post you’ll read below.  Please don’t blame R.K. for this editorial blunder, instead, please read Part 4 and return next week for the re-publication of Part 5.)

As spring arrives, it seems like a good time to restock the bookshelf with a few more amazing stories. The vistas of imagination created within the landscape of science fiction, fantasy, and horror are approaching infinity. It is becoming increasingly difficult to assign priorities to any reading list. What follows are a few recommendations from some of the greatest minds in the industry. I hope you enjoy this latest installment of the ultimate science fiction reading list.

In my novel Earth (1989) I took readers to the near future, with no aliens or dolphins, but exploring possibilities over the near term. It had web pages, four years before the web! In fact, some fans maintain a wiki tracking the predictions from my novels, especially Earth.

Existence is in that same genre, peering ahead toward the drama that many of us will live through, very soon, smart mobs of agile citizens, focusing on threats and problems faster than governments or corporations. Wearable augmented reality in all its amazing vividness. Surprising outcomes from global climate change. The strange ways that artificial intelligence might arise… and our own struggles to deal with the strangers we are fast-becoming.

And into this maelstrom… there comes First Contact in a variety that no one ever imagined. With a surprise revelation that I guarantee you’ve never seen before.

Oh… have a look at the amazing video preview-trailer for Existence, with incredible art by Patrick Farley! 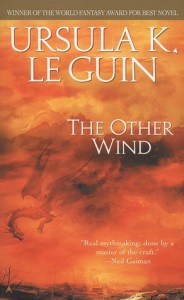 Writing the six books of Earthsea—two trilogies—took me nearly forty years; I was pretty young when I started A Wizard of Earthsea, and pretty old when I finished The Other Wind. It started out as a hero-story, mostly about people of privilege and power, and gradually shifted to questioning the authority of privilege and the uses of power. Ged and Tenar, as they kept growing and changing, were always dear to me, and always surprising me. I didn’t know where it was going till I got there—but it was all one story, always.

People had been asking me to collect reviews for some time, and when Roger Robinson of Beccon Press—which had published collections of my good friend John Clute—invited me to put a volume together, it turned out to be harder than I’d expected. At first I’d planned to do a smaller selection organized maybe by themes or authors, but John encouraged me to simply arrange them chronologically, to create a kind of chronicle of the last couple of decades. And since Roger was willing to do multiple volumes, I ended up including most of what I’d written for Locus during those 14 years—although there are quite a few reviews omitted, mostly of nonfiction titles or annual anthologies. Of course, I also missed reviewing some major titles during this period, and I regret that they aren’t covered in the collections. 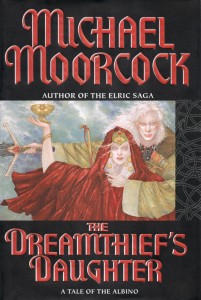 With The Whispering Swarm, my new novel, I’m trying to investigate the appeal of fantasy and the way I might have used it to escape from moral responsibility as a young man. The book is also a memoir and has historical elements. I’m not likely to revisit old characters in entire novels, but I do bring them back where their particular narrative can improve the general one. I did that with Bastable in the last Elric/Eternal Champion novel which began with The Dreamthief’s Daughter (Daughter of Dreams). The fiction I’m currently writing tends to emphasise character and moral examination. Stories, which appeared in Stories, edited by Gaiman and Sarrontonio, is closer to much of what I’m writing apart from Jerry Cornelius stories like The Grenade Garden which I’m still writing in direct response to current events. This includes two recent stories in the ‘Third World War’ sequence I began with Crossing into Cambodia. They are Kabul (set in the near future) and Staying in Rome (set in the near present). Another short novel I’m working on, Stalking Balzac, also deals with my life as it actually was rather than the one I imagined! But I have so many stories still crowding to get out of my head, I can’t say there will never be another Bastable novel, or indeed another Elric story (in fact I’m currently planning one to be done as a comic). My new songs refer to The War Amongst the Angels and the Game of Time. 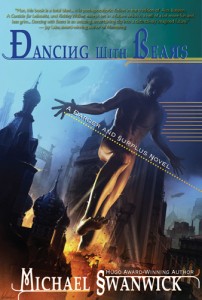 I was reading Thomas Pynchon’s Mason & Dixon, which contains a wonderfully engaging talking dog. Instantly, I conceived the desire to create my own talking dog. To ensure that mine was an independent creation, I set him up on two legs and dressed him up in a manner such as one might encounter in an illustrated collection of Mother Goose rhymes. I put him onto the docks of London in a post-Utopian future I’d been playing with in my imagination. Then, because I needed someone for him to talk to, I had him approached by a nondescript con man named Aubrey Darger. At which point, the two rascals seized control of the plot and ran off with it, leaving me scurrying after them, scribbling madly, and crying, “Wait up! Wait for me!”

After setting fire to London in their first adventure, Darger and Surplus set off for various parts of Europe and then Moscow, always heading for a new destination at the end of each adventure and—because they’re infinitely distractable—popping up somewhere else at the beginning of the next one. They’re always looking for a new score, and ever moving eastward. They don’t realize it but they’re on an accidental trip around the world. Ultimately, Surplus must return to the Demesne of Western Vermont to confront certain secrets from his past, and Darger must revisit the slums of Mayfair to learn what has become of his childhood.

I’ve just finished their second novel, Chasing the Phoenix, in which they (again, unintentionally) conquer China. Literally, I mean, with armies and such. They also realize—nor did I, at first—that they are putting an end to their age. By the time their journey is done, the world will be a very different place as a result of their actions.

I’d suggest diving right in with the current issue and working backwards. If you are a person who prefers print, grab the most recent Clarkesworld anthology. http://clarkesworldmagazine.com/staff/#realms. If you’d prefer a greatest hits collection, check http://clarkesworldmagazine.com/awards_and_recognition/ for the stories that have been singled out by awards and year’s best anthologists as their favorites.

Helliconia appeared in three volumes, published simultaneously in New York and London, with New York—thank heaven!—doing the proof-reading. In 2011, NASA’s telescopes detected a planet subject to two linked suns, a bigger and a lesser, this is to find in space something already described in a book. The one dumb thing is that this cosmological set-up is labeled Kepler 16B. Come on, guys, this should be called Helliconia. I did two years research on this one!

Peacemaker is one of a series of books that starts with Foreigner. Every three books tells a complete story. It starts with a ship that has suffered an interstellar accident and manages to find a habitable planet—old scenario. The planet is, however, not only habitable, but inhabited, and landing on it goes fine until it goes awry. The two cultures clash. That’s pretty well chapter one. Now skip two centuries. A young diplomat and translator finds somebody prowling outside his ground-level apartment door at night, and he suddenly finds the native ruler’s high-level bodyguard engaged in a gun battle right through his bedroom. He’s shaken. He’s more shaken as the chief bodyguard, after saving his life, trades guns with him and insists he never fired a shot. 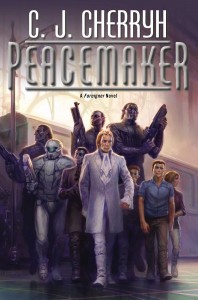 The young diplomat, Bren Cameron, is the only human allowed to be on the mainland. His job is basically adding words to the accepted dictionary and trying to prevent another war breaking out. The natives’ mindset and social structure are not only foreign to humankind, they operate at a strangely-pitched angle to human instincts of community and friendship.

But he has just met the two people to whom he will become deeply and emotionally attached, in a culture which has no word for ‘friend’ or ‘love’ and yet—does have words that describe an instinct humans don’t share. It’s something he can almost reach—and yet—can’t, and not just because there’s no word for it. It’s a reciprocal situation.

And the native ruler has decided Bren could be very useful…if Bren can meet his grandmother and live.

I hope you find something new to satisfy your need to keep on reading.

Today’s Fiction In Amazing Stories: The Pixie by Steven M. Long and The Jester by Michael J. Sullivan

Star Trek At 33 Cents A Lick

In which qualms over killing Dorothy are meditated upon

Interview: Kaitlyn McKnight YA Author of a YA Novel