In this week’s viewing: Dororo and Midnight Occult Civil Servants make it really clear who’s going to die, Attack on Titan tries for some misdirection, and more! 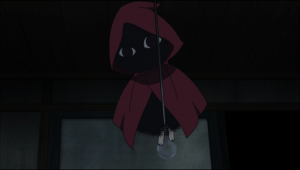 Midnight Occult Civil Servants #9 – Arata gets wind of another case suited to his talent just as he is rotated into a team structure aimed at encouraging cross-site participation. But that’s a good thing, since he can demonstrate his de-escalation technique to his counterparts. And, in turn, he can be shown how they approach a situation to make it much worse.

When the Other turns out to be cute, sympathetic, and largely reasonable, you just know it’s going to become Kanoichi’s demonstration model for how he exterminates them. Positioned as a member of a level of government that outranks Arata’s, Kanoichi appears to represent the dominant school of thought in Tokyo. Hark back to earlier this season, when it was mentioned in passing that the civil service exam is supposed to keep people like Arata out of the supernatural relations department. Someone clearly finds it to their advantage to keep humans and non-humans hating each other.

Arata picks an interesting metaphor after Kanoichi kills the Other, because executing criminals after they confess is precisely what modern Japan does. It is routine to have criminals sign confessions, and Japan is one of exactly two first-world countries to retain the death penalty. Kanoichi, in turn, accuses Arata of being the sort of person who brings disorder to society.  Aiming to keep society orderly is one of the principles of the Japanese right wing. The author is definitely lining things up for a statement here.

For those interested in how the real-life ward and metropolitan goverments interact, there’s a handy official explanation here. 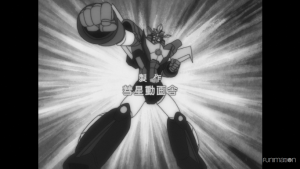 RobiHachi #9 – Robby and Hatchi stop by the place where the Hizakuriger was built looking for a simple service, only to trip over some complicated business that has involved both their families for three generations. Yang becomes Robby’s unlikely savior, but it turns out there’s something he wants to acquire even more than Robby…

This episode reaches late-Heinlein levels of self-referentiality, but let’s see if it can be disentangled enough to explain. Start at the end, where Yang’s cherished show has a name similar to Binan Kōkō Chikyū Bōei-bu LOVE!. That’s the original title of Cute High Earth Defense Club LOVE!, which was created and directed by Shinji Takamatsu, just like RobiHachi. Takamatsu also wrote the script for episode 4 of Cute High, and it happens to also have had a theme of nostalgia taken to extremes.

Now for Hizakuriger and 1969. At the same time as Grandpa Yarge was making his giant robot show, someone with a striking resemblance to Hatchi was blasting off to the moon. But the heroes of Hizakuriger look like a very young Robby and Hatchi— and note that this version of Hatchi likes to play with rockets. Which suggests that their grandfathers were childhood friends.

There’s also a passing reference to the show Nerima Daikon Brothers, and I have no idea how that’s supposed to fit in. Anyway, all I can see Takamatsu trying to say here is that anime can be great, but anime fans can be scary. Don’t be those fans. 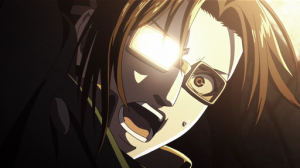 Attack on Titan #55 – Not only does the Beast Titan escape, Reiner slips through the Corps’ fingers because Jean argues for keeping him alive just a little bit longer. The Beast Titan’s controller also stops by Eren to deliver a cryptic message: he will someday rescue Eren from his home. He also seems to have known Eren’s father. Indeed, Eren thinks he even looks like Grisha Jaeger. Maybe this is Eren’s uncle or cousin.

But there is some kind of family feud going on, because the Beast Titan says that Grisha brainwashed Eren. Now, it’s understandable that the view from outside would be that everyone within the Walls is brainwashed, what with the memory erasure and the suppression of science and technology. But what specifically on top of that could Grisha have done?

At least the Corps has managed to capture one Titan, and Armin’s still alive, and Levi’s got the Titan serum, so everything’s lined up perfectly until Erwin turns out to be alive as well. Now it comes down to a debate over which of them is the bigger genius or more indispensible to the cause. Except the viewer knows that one of them is a main character and one isn’t, so all through the arguing and the screaming and the fake-out, the ultimate choice is clear. 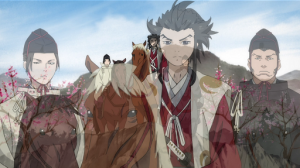 Dororo #21 – An unusual amount of time establishing the innocence and beauty of Midoro the horse means we have yet another obvious victim being set up. Though, okay, I didn’t expect her to be turned into a suicide bomber.

In another blunt development, Mutsu muses that she is Tahōmaru’s left hand, and Hyōgo is his right hand. At the end of the episode, Mutsu has only her left arm, and Hyōgo has only his right. (I’m feeling confident that we should use female pronouns for Mutsu now, by the way. From the flashback, I believe she’s supposed to be understood as a cis woman who has taken up a traditionally male occupation because circumstances.)

Meanwhile, Hyakkimaru is stick at the bottom of a canyon while Dororo gets carried off again. There is some kind of demonic energy down there among the dead, but it’s not clear which reanimates Midoro: a demon, or Hyakkimaru’s desire for revenge. 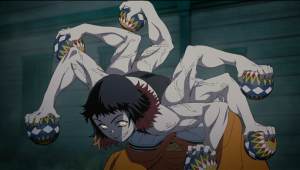 Demon Slayer: Kimetsu no Yaiba #9 – It’s time for a traditional shōnen all-in knock-down drag-out battle episode. Despite having three friendly demons to help him out, Tanjirō can’t do much besides run around frantically trying to save himself, because the attackers are an altogether more powerful class of demon.

Also in the shōnen tradition, the badguys have weirdly specific themed powers. One has an arrow metaphor, and the other uses traditional Japanese handballs called temari. (Or actually just mari, in the original soundtrack, letting them then reference another use for mari, the kickball game called kemari.) Making and playing with temari are women’s activities, which brings up another shōnen tradition: that the minority of fighters who are female are generally stuck with girl-themed powers.

At least this hasn’t happened to Nezuko yet, but it does look like she’s about to get an upgrade of some sort. It doesn’t look like blood, but having already seen one alternate way for a demon to regain strength (Nezuko’s hibernation), perhaps Tamayo has found yet another.

Ira Nayman makes a startling admission: he often prefers literary fiction to genre fiction. Oh, no! That does not, however, make him blind to the limitations of literary fiction, as his review of A Free Man indicates.