How can you not want to read a book titled Cyborg’s Secret Baby? That’s even better than Secret Baby Cyborg…. 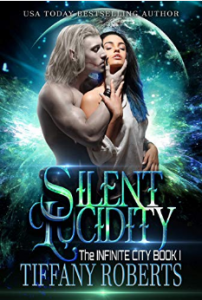 The husband and wife duo writing as USA Today Best Selling Author Tiffany Roberts have begun another exciting series with Silent Lucidity (The Infinite City Book 1). These two can really spin a tale and they bring their extensive experience as gamers to bear on plot twists, settings and characters. It was an action packed read and I can’t wait for the next book. The blurb: She didn’t ask to be abducted.

She didn’t ask to be torn away from her simple, happy life on Earth.

She didn’t ask to become a pet to a powerful alien merchant.

Abella hasn’t allowed four years of slavery to break her spirit, but after numerous failed escape attempts, the chances of making it home to her family seem bleak. That is until she shares a passionate, forbidden dance with a silent stranger. His piercing silvery eyes haunt her with a taste of hope.

Intense, mysterious, and deadly, Tenthil may be the key to Abella’s freedom. But as she finds herself increasingly drawn to him, she realizes the truth—Tenthil has no intention of taking her home.

Will he be her salvation, or will she trade one master for another? 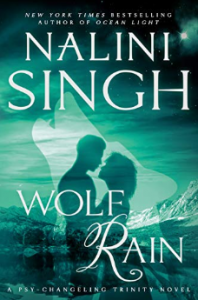 New York Times and USA Today Best Selling Author Nalini Singh has served up a new Psy-Changeling novel, Wolf Rain, the third in her Psy-Changeling Trinity spin off from the original series. She’s my absolute autobuy author and this latest novel did not disappoint. (I drop everything, even working on my own novels, to read one of hers the day it arrives on my kindle.) I particularly enjoy the way she skillfully weaves characters from previous novels into the current action, without detracting from the current hero and heroine. The story: Kidnapped as a young girl, her psychic powers harnessed by a madman, Memory lives a caged and isolated existence…until she comes face-to-face with a wolf. Labelled an empath by her bad-tempered rescuer, Memory knows that her ‘gift’ is nothing so bright. It is a terrible darkness that means she will always be hunted.

But Memory is free now and she intends to live. A certain growly wolf can just deal with it.

Alexei prefers to keep his packmates at bay, the bleak history of his family a constant reminder that mating, love, hope is not for him. But Memory, this defiant and fearless woman who stands toe-to-toe with him awakens the most primal part of his nature–and soon, he must make a choice: risk everything or lose Memory to a murderous darkness that wants to annihilate her from existence… 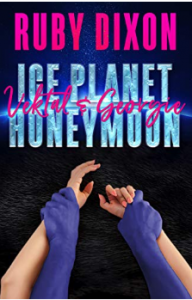 Ruby Dixon issued Ice Planet Honeymoon: Vektal and Georgie, a short novella in her steamy Ice Planet Barbarian series and here’s the synopsis: What happens after happily ever after? Quite a bit, actually. Georgie and Vektal are mated, but Georgie has a few things on her mind before she settles into her new life…

Why not have a honeymoon? 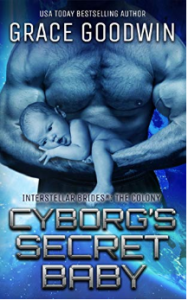 I found a new cyborg novel for this week’s post, Cyborg’s Secret Baby (Interstellar Brides The Colony Book 7) by USA Today Best Selling Author Grace Goodwin. This one is on my TBR as I’ve really enjoyed previous Colony books. Grace writes steamy and hot. The plot: Atlan Warlord Jorik guards the Coalition Fleet’s Processing Center on Earth, protecting warriors and brides without mercy or distraction…until he sees Gabriela. She is everything the beast within him craves. Soft. Curved. Unafraid. He dreams of courting her properly, wooing her into accepting his beast’s claim, and making her his—body and soul. Danger strikes and his beast takes control—resulting in his immediate removal from Earth. From Gabriela.

Gabriela fell in love with an alien Warlord who fought to save her life, then disappeared, only to learn he was later killed in a battle with the Hive. She moves on with her life as best she can, with one beautiful reminder of their time together. A baby.

When she learns Jorik isn’t dead, but banished to the Colony, she and the baby are sent to find him. The problem? He’s not just contaminated, he’s been newly matched by the Interstellar Brides Program. And not to her. 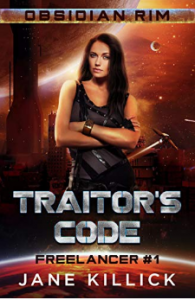 Jane Killick presents Traitor’s Code: Freelancer  1, book 3 in the connected Obsidian Rim series and here’s the story: Intrigue, adventure and love on the edge of the galaxy.

When a dying fugitive begs Cassy to protect a stolen code, she becomes custodian of a secret which could save humanity.

Cassy, a freelance spaceship captain, battles pirates and evades jail as she works to unravel the mystery of the code taken from the Fertillan royal family. Pursuing her, Prince Stephen of the Fertillan Guard delves deeper into her past and discovers someone protecting Cassy from behind the scenes.

Drawn closer together by the investigation, Cassy learns why the Fertillan royal family fears the secrets hidden inside the code and why the fugitive risked everything to steal it. Torn between her love for the prince and the promise of saving humanity, she must choose the dangerous path or betray her own conscience. 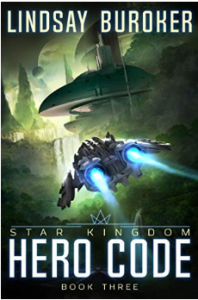 Lindsay Buroker has released Hero Code, the third book in her Star Kingdom series. The plot: Casmir Dabrowski is finally heading back to his home world, determined to gain an audience with the queen and convince her to tell him the secret of his genes. But the terrorists who have been sending robot assassins after him are still there—and still want him dead.

As soon as he lands, the trouble starts. His best friend is whisked off by Royal Intelligence, his new ally walks him into a trap, and he learns the queen isn’t in the city.

But the king is.

Casmir finds himself face to face with the man who has the power to wave a hand and have him and everyone he loves tortured, imprisoned, or even slain. King Jager isn’t pleased with the role Casmir played in keeping Fleet warships from claiming an ancient technology for the Kingdom.

If Casmir can’t convince Jager that he’s worth keeping around, he could lose everything and everyone he cares about. 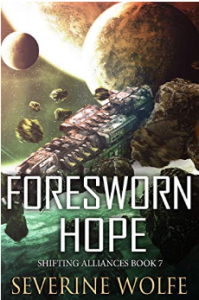 Foresworn Hope is book 7 in author Severine Wolfe’s Shifting Alliances series and here’s the summary: Sometimes it’s as simple as walking into a room…

Taka Ogata had one goal and that was to get back to Earth and her Laurel. It didn’t matter that she didn’t know how to fly, or where she was in the universe, her path was unswerving, to the point where she always had a guard assigned to her to keep her from killing herself in the attempt. She had suffered greatly from The Accord and wanted nothing to do with it. Everything in her was desperate to get back home.

Oras had seen Taka walking into the room at his friend’s house and immediately knew she was his bond mate. When she attempted to steal a state-of-the-art shuttle, he could not let her harm herself, and he agrees to take her back to Earth, putting his career and life at risk.

Taka trusts no one, so Oras is fighting a losing battle from the very beginning. They must both confront what has happened to her when they face her ultimate goal even foreswearing promises he’s made. The only promise he will not foreswear is to protect her to the very end. 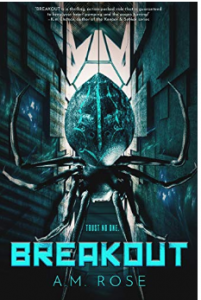 Breakout by A. M. Rose is a YA Dystopian science fiction novel with some light romantic elements and the blurb reminded me so strongly inagoodway of the twists and turns of James Dashner’s Maze Runner, that I immediately added it to the my TBR list.  The plot: Six days.

That’s the amount of time until Lezah’s execution.

She’ll die never knowing what got her locked up in that godforsaken prison in the first place. Her only chance of survival is to escape. Except the monitoring bracelet that digs into her wrist, the roaming AI, and the implant in her neck make freedom close to impossible.

Her best chance is to team up with the four other inmates who are determined to break out, even if one of them is beyond gorgeous, annoying—oh, and in for murder. But he has a secret of his own. One that could break Lezah if she finds out, but could also set him free.

Figuring out how to work with him and the rest of this mismatched group of criminals is the only way Lezah will survive to see the outside world again.

But nothing in this prison is as it seems. And no one. 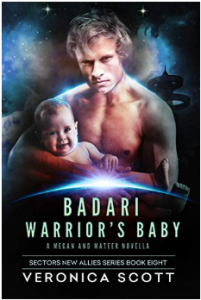 And last but not least, I’ve released a novella in my award winning Badari Warrior Series, Badari Warrior’s Baby. My readers have been anxiously awaiting the arrival of this baby since book 2 in the series. Here’s the blurb:  Dr. Megan Garrison, mate to the Badari Warrior pack’s senior enforcer Mateer, is perilously close to the due date of their baby when she’s kidnapped by human malcontents in Sanctuary Valley. The kidnappers threaten to harm her and intend to ransom the half human-half Badari child to the evil Khagrish scientists in return for their own lives.

Mateer and his fellow Badari launch a desperate effort to save his mate and child but the situation is made more complicated as Megan goes into labor. Can they rescue her in time to save mother and child?

New releases from Brick Marlin Crysis Hunter Edition Still Available Brick Marlin sent along word that he has a bunch of new releases coming out this year and wanted us all to know about the latest: Blue Lights In A Jar was releases on January 15, 2013 by Whiskey Creek Press and       […]