Kim Mutch Emerson is founder of the small press Master Koda Select, and an author of dystopian SF

Independent publishers, i.e. small presses, have become amazingly popular these last few years. Science Fiction and Fantasy Authors that don’t fit into the boxes built by the major publishing houses have found a niche in the Speculative Fiction arena, succeeding by appealing to genre related presses and presses concerned about developing their author’s brand and improving the quality of their work.

One such press is Master Koda Select Publishing, a small outfit run by a very busy lady, Kim Mutch Emerson. MKSP publishes books of many different genres, concentrating on authors who are serious about releasing a quality product and who are willing to work as a team to promote each other. Her own work is SF dystopia.

I was first drawn to this press after observing an extremely successful launch event MKSP was hosting. The magnitude of the participation amazed me and I watched the book she was promoting make its way to an Amazon Best Seller’s list in a couple of hours.Of course I wanted to know more!

Kim holds workshops and webinars from time to time addressing the art of writing, and works with her authors on an individual basis, encouraging them to hone their skills. Today I’d like to spend a little time asking Kim what makes someone already busy with her own writing want to help other authors to the degree she does.

Dianne Gardner for Amazing Stories: First I have to ask you because the name has always intrigued me. What is Master Koda? What does the name mean and what made you start up a publishing house?

Kim Mutch Emerson:: The name Master Koda was given to me when I did life coaching. My clients dubbed me Master Koda (Koda being half Yoda and half Kim) the master of prosperity. Koda in the Lakota language means friend of the people. When I learned this, I decided to keep the name.

ASM: What do you see as a small publisher’s greatest strength? Weakness?

KME: It depends on the publisher. I feel our role is to strengthen an author’s writing, publish a quality product, help them promote their work and encourage them in this new world of publishing. It is one of the most vicious industries on the planet and can eat people alive in one gulp.

ASM: What do you see in the future for MKSP?

KME: To continue to change with the times, stay up on the most recent ways to market, plug the holes, and strengthen our team.

Given the opportunity to read your book Digitus 233 I was impressed with the story of a boy lost in the turmoil of a dystopian world. The journey is unique. Zander, a young teen is suddenly forced out of his comfort zone into what he thinks is a ‘camp’ for rich kids, but soon realizes he’s been thrust into a raw and untamed environment where he’s forced to learn to survive. The survival skills he uses are ingenious and the conspiracy plan Zander and his brother are forced to overcome is cunning. I especially enjoyed the characters and found myself pulling for them, their conversations and their relationships. I’ve grown quite attached to these young people and am concerned for their safety so I hope there’s a sequel soon! Action packed from page one to the end, I couldn’t put the book down!

Congratulations on a job well done. I want to let the readers read the synopsis of this book which ranks 4.8 stars before I ask you any more questions, Kim. 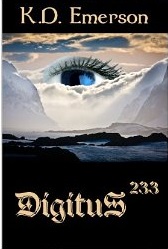 Digitus, the world’s dominant corporation, has studied human nature for centuries. They are experts who expand on a human’s natural gifts and talents to create supreme world leaders in all major areas of science, art, religion, music and leadership. A select few young adults are handpicked each year to join the elite.

As a final test of induction into Digitus, Zander’s team finds themselves ejected from a Learjet and land on a barren arctic island. They come together in an effort to survive and escape. Unfortunately, escape is short-lived when a nuclear powered, ballistic missile submarine rescues them, and a computer malfunction threatens an all-out nuclear attack on North America.

Time is running out as Zander’s brother Zeph struggles to uncover the truth behind the corrupt organization that holds the future of the world in its grasp. Tick Tock.

ASM: In your words, give us the story’s ‘pitch’.

KME:  Digitus 233 is the first of a series. A select group of young adults uncover the sinister plot of Digitus (the world’s controlling power) to control the masses and destroy all who will not comply.

ASM: What is the science in the book and how did you come up with it?

KME: All of the science used in the story was either related to me by people who invented it or witnessed it being used. Some of it was taken from my own personal history with the fringe sciences.

KME: The history of the human race, World War II and the Nazi Regime, my own personal experiences, my concern that the planet is heading for complete destruction.

ASM: You have a character in your story named Crazy Dude. Who is he and what is his role in the work?

KME:  Crazy Dude is a monkey that Zeph, (one of the main characters) meets up with in the jungle. He is symbolic for every human’s need for bravery, laughter, and joy. There are a lot of things to learn from Crazy Dude.

KME: The last line of the book. It is also a symbol. I don’t want to give away what that is because I want people to chew on it for themselves and discover what that line can teach them about themselves.

ASM: Who is your favorite character in the story?

KME: Character? And why? Ummm – wow. I don’t know. All of the characters have special meanings. They each have something to say and lessons to teach.

ASM: Will there be a sequel? Where would you go with it?

KME: Yes, there are two more books in the series. And to quote some other guy, I will go where no man has gone before.

ASM: Give us some links to your work and include anything you might like to say to the SF Fantasy enthused public!

KME: Science Fiction is just science that hasn’t been applied in the mass population yet. To all you SF fans, fly on my friends, fly on!

Meet me on Facebook or join my newsletter to connect. And if you want to take a look at Digitus 233, here is the link:

The Retro Future of Back to the Future Part II

Writing a blog about writing has led me to a lot of cool websites and other writing blogs. I’ve found more tools than I’ve ever had to help me get my stories written. As I’ve researched individual topics, I’ve discovered some great resources that I wish I’d found in time for some of my earlier […]

Before I get properly rolling with this blog, I thought it might be worth taking a moment to stake out the territory I plan to cover. This website, and these blogs, are all about fandom, and so it might be expected that the art I am posting here will be what goes, these days, under […]

Scientists discover a “neural clock” deep inside the human brain