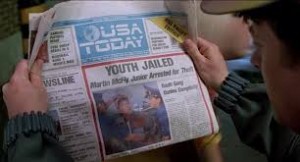 With it being 2015, there has been a lot of talk about the predictions made by Back to the Future Part II, since the first act of the move is set in 2015. You have probably already seen a ton of articles going over what the filmmakers got right and wrong about the future, but they mostly focus on the technology, not the history. What events happened between 1985 and 2015 to create the future Marty and Doc visited in the movie? Now the director, Robert Zemeckis, has gone on record saying his version of the future was never meant to be accurate. Nevertheless, certain events had to happen to create the future we saw in the film and while most of what I am going to say is pure speculation, we notice some intriguing series of events thanks to the background material provided by Zemeckis and his crew.

Most of what we know about the world of comes from the newspaper Doc shows Marty, but we also get hints from the dialogue, advertisements, etc. The United States still exists and is led by a female president (Hillary in 2012, perhaps?). Yet how much control this Madame President has over her country could be minimal. Watching that scene again you get a sense that the government wields limited power in this 2015. Consider how President Reagan was mocked in a popular 80s nostalgia cafe, which suggests his veneration by the modern conservative movement doesn’t exist and that movement may not exist at all. The police also seem neutered by employing helpful supermodels who just take people they find slumped over in alleyways back home instead of to the station for drug use. Meanwhile, Doc mocks the post office and explains to Marty how the country abolished all attorneys. With so many important symbols of government power diminished (and with a major newspaper making it front page news that the president’s #1 problem is reporters asking the same questions) one wonders if this 2015 is part of some L. Neil Smith-esque libertarian fantasy.

Perhaps the Republican party was taken over by libertarians or maybe even an anti-government third party took the reigns of government and reformed the system. Its not completely unthinkable to have such a scaled back government when you consider the geopolitics of this 2015. The advertisement encouraging people to try surfing in Vietnam suggests that one of the last communist states may actually be a pro-Western democracy completely integrated into the world economy. This suggests a vastly different collapse of the Soviet Union that could have spread to other communist countries as well. Korea could once again be united in this world, Cuba is a haven for tourists and China could now be a Tibet-less democracy. This could even explain future Marty’s Japanese boss. I talked before about the popular assumption in the 1980s that Japan would be a resurgent power in the future and it seems like Back to the Future Part II agreed. In fact China’s transformation into a capitalist democracy may have been rough enough that they are in no position to enter the world stage, giving Japan a chance to stretch its muscles and even exert influence over an increasingly inward looking United States.

Why do I think the United States is more isolationist in this world than in ours? For one thing this 2015 seems brighter and more optimistic than our present, which suggests events like 9/11 and the wars it spawned never happened. With the Cold War over, a non-existent terrorist threat and the previously mentioned smaller government, the United States might have taken a chainsaw to its defense budget and cut back on its military commitments around the world. On top of all that, we get an idea that this 2015 is more decadent and people’s main concern is to seek out pleasure wherever they can find it. The dialogue between the aforementioned cops suggest a world where drug use is prevalent. Furthermore, we seem to have lost the will to create new works of art and instead fall back on sequels like Jaws 19 (although we may be living in that kind of timeline ourselves). Even television watching has become excessive with people viewing more than one channel at a time. Finally, what is up with the “Atrocity Channel” that Marty’s kid mentioned? Is that why we abolished all attorneys, because everyone just competes on The Running Man to prove their innocence? Or is that the channel where people watched the Cubs win the World Series?

Of course, this America isn’t all that bad. People seem to be more diverse and tolerant when you notice all the minority extras in the crowds. Even Griff hangs out with a lot less white males than his grandpa ever did. Women seem to dress more suggestively which suggests that rape isn’t a big issue (Accused of rape? Off to the Atrocity Channel with you!) The fact that cars run on bio-fuels also suggests that global warming/climate change is less controversial and people made the necessary reforms to protect the environment. Yet I can’t quite shake the feeling that America dropping oil as an energy source would be hell on the economies of the Middle East. I am not even going to begin untangling that corner of the globe in this 2015.

That leaves us with perhaps one of the oddest, and yet troubling, line of text in the whole movie: the Swiss terrorists. It seems silly, but its not like our pre-2001 timeline expected terrorists to launch a successful attack out of a landlocked, mountainous country. Perhaps they were invaded and occupied, but who did it? As mentioned above I don’t think it was Russia, which would still be recovering from the collapse of the Soviet Union. That would leave some other country in Europe. To be honest when I really thought about the Swiss terrorist news item, I couldn’t help but think about Operation Tannenbaum, Nazi Germany’s plan to invade Switzerland during World War II. I then pictured some dark version of the European Union that is aggressive and expansionist, without a United States or Russia to keep it in check. Is Britain a part of it? Maybe, there is a mention of a “Queen Diana” coming to visit Washington, but what the hell happened to Queen Elizabeth II? Was she executed in some EU sponsored invasion or coup? Could Diana be leading some government-in-exile and is trying to convince the United States to come out of their isolation to help her country? If that’s the case, are these Swiss terrorists actually freedom fighters?

Wow, I really took a fun and light-hearted film and turned it into a dark dystopia. I guess I still have The Man in the High Castle on the brain. Anyway, what did you think happened between 1985 and 2015 in Back to the Future Part II? Share your comments below. Now if you excuse me, I am going to see if I can get a hover conversion for my car…