A lucky find at the used book rack located in my train station gave me the opportunity to read and review Warday by Whitley Strieber (the same author who claims he was abducted by aliens) and James Kunetka. 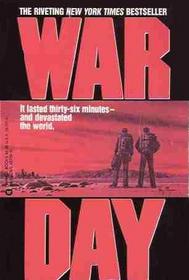 I have been reading so muich new science fiction these days that I got an urge to read something older. A lucky find at the used book rack located in my train station gave me the opportunity to read and review Warday by Whitley Strieber (the same author who claims he was abducted by aliens) and James Kunetka. This book has always been on my radar because it is mentioned often in alternate history circles. Since I was between books, I thought why not give this old, yellowing copy a chance.

The book can best be described oral history about a nuclear war between the United States and the Soviet Union. Unlike a lot of other nuclear holocaust works, this war was limited in scale with targets being mostly military/command related with only a few civilian targets (New York, Washington and San Antonio). Still the book tries to show how even a small nuclear could still be devastating for the entire world.

I can’t help myself from comparing this book to World War Z, the only other oral history, SF book I have experience with. As I have said before, both are oral histories with the author(s) acting as narrators. Unlike World War Z, however, the interviews are shown in the order they are given. The fictionalized versions of Whitley and James are traveling across post-war America, beginning in Texas, swinging through California, crossing the Great Plains by train toward New York to, eventually, coming home. On their way they talk with a variety of people trying to survive and give glimpses on how the geo-political situation has changed since the war. From their perspective we get a vision of what post-war America is like and, incidentally, what it must have been like for adults in the 1980s to live with the fear that people they didn’t know could one day decide to start a war and kill billions.

Speaking of the 80s, the book is full of nostalgia for this decade. You will see recognizable brand names, references to the Strategic Defense Initiative, and to the assumption of Japan’s likelihood of becoming a superpower (no Chinese economic miracle in this world apparently). It is funny how quickly our futures become obsolete. Even when taking into account the dark vision of nuclear destruction the book portrays, you still have some basic assumptions about what is likely to happen in the next few years and how wrong the authors ended up being. I wonder what other assumptions of the future we are wrong about now…

Back to Warday, the authors provide fictional government memos and polls to provide you with the technical details of the effects of the war and post-war society. This backstory can be dry, but you can skip it if you want because it does not effect the plot at all. The geo-political situation, however, is fascinating. The United States exists and at the same time it doesn’t. A smaller federal government (elections having not been held since the war) operates out of Los Angeles, but people have returned to a pre-Civil War outlook on America, where your first loyalty is to the state. There is a Hispanic secessionist state out of El Paso, Alaska is part of Canada and California is a police state with borders closed to other Americans and seriously considering just making a go for it on their own. Across the world, Japan and Britain wield considerable influence over the United States, the Israelis have curb stomped the Arabs so bad OPEC doesn’t even meet anymore, and the situation in the Soviet Union is so bad even the White Russians have returned.

The book is quite entertaining, even if the fear of nuclear war doesn’t set off the emotional triggers today as it did the 1980s. Although we still worry some rogue state might give a primitive bomb to some terrorist organization, the fear of nuclear war between the superpowers ended decades ago. Nevertheless, this book can be…difficult for contemporary readers. It can be sort of bigoted with the tales of Hispanics and Native Americans ethnically cleansing the Southwest of whites or how blacks have it easier in post-war America because there aren’t enough of them around to scare whites (as if that is the only reason racism still persists in America).

Sexism also rears its ugly head with most of the female characters working in traditional sectors like healthcare or education. To top it all off the one mention of homosexuality is in the form of a Catholic priest counseling a young boy who is in love with another boy and referring to him as “troubled”. Before people declare this book right-wing, I like to point out that conservatives might not be comfortable with how accepting the characters (and this world’s version of the Catholic church) are of abortion and euthanasia.

I’m not sure if I can recommend this book. Not only is its message of peace between the superpowers lost in the present day, but the politics/beliefs of the authors about American society might offend some readers. Read at your own risk is the best I can say about this book.

As I sit wandering the internet for fresh tidbits of science fiction, fantasy, and horror, I find them flourishing everywhere. Perhaps flourishing is not the right word. Flourishing leads me to images of well-manicured flower gardens and carefully pruned trees. The speculative fiction of today could very well be classified as a kudzu rather than […]