This weekend of October 18-20th my wife and I attended the 33rd running of Necronomicon, a science fiction/fantasy convention held annually in Tampa, Florida in mid-October. I started attending Necronomicon back around 1993 taking my family with me. Our two sons would spend most of their time in the gaming area while my wife and I attended the various panels that caught our interest. The location this year was on the USF campus research park in the Embassy Suites hotel. Being on the grounds of the university was bit special for me as my final college undergraduate course in engineering was taken at USF. The locale also featured numerous eateries and other distractions within a mile radius.

Necronomicon is run by the Stone Hill Science Fiction Association in Tampa, Florida. The club was started around 1979 by a small group of Tampa science fiction enthusiasts led by Ann Morris and her husband, Kendall Morris. The name was taken from Jules Verne’s book “From the Earth to the Moon” since Verne placed the gun launcher for the lunar spacecraft in “Tampa Town” at Stone’s Hill making it an appropriate and unique name for the new club.

One of the most enjoyable aspects of Necronomicon for me are the technical panels. Being a “rocket scientist,” actually an aerospace engineer (retired from NASA), I always find numerous panels on convention schedules that appeal to my interests. At Necronomicon these panels always feature some experts in the fields that are being discussed and of course that makes the panel that much better. I have a friend from my days at KSC, Jeff Mitchell, who is another rocket scientist and a teacher at FIT as well and is either a panel moderator or panelist on many of these technical panels. The panel pictured below was “Going Green: What the Individual Can Do,” which discussed what people can do in their homes and lives to reduce their energy consumption and minimize their impact on the planet.

Other technical panels this year included a panel on brain mapping. Dr. Kendall Morris, who does research in the area at USF, and a panel of scientists discussed what is being done in this field. This con always features a couple of panels dealing with biology with Dr. Morris and his son as panelists. There were a couple of panels on astronomy with Craig MacDougal, who is an amateur astronomer, along with other technical panelists. Other panels featured at the con were discussions on the Star Trek universe, Dr. Who, genre television shows, costuming, writing, and many other interesting subjects. Necronomicon usually has at least three panels each hour making for an eclectic and varied set of subjects that should appeal to most attendees in one subject or another.

There was a gaming track ongoing all weekend on the second floor of the hotel. As I mentioned at the beginning our two sons would participate in this when we first started attending this con years ago. Most of the gamers are an extremely dedicated group and can be seen at all hours of the day and night deeply involved in their favorite game. Cons bring these gamers together for a weekend of fun and participation. Gaming real time at a con is a fantastic socializing experience which I think brings as much pleasure to the gamers as the game itself. 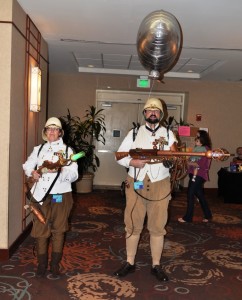 One particularly unique aspect of this con is that costuming is a major part of the agenda. Ann Morris is a costume expert which emphasizes this aspect of Necronomicon. The hallways are typically filled the entire weekend with attendees showing off their latest creations. Then on Saturday evening the masquerade contest is held and this convention usually features numerous well done costumes. This year was no different with some excellent entries. I noted a few in particular such as the professionally done Mech Warrior standing about 10 feet tall, a pair of Steam Punk Ghostbusters, a medieval knight, a couple of zombies, and other fantasy and science fiction creations. If you like to keep a photographic record a camera is a must and most masqueraders are happy to have their photo taken.

Every science fiction convention has a writer guest of honor as well as other writer guests. This year’s guest of honor was Christopher Paolini. He is the relatively young author of the Inheritance cycle of fantasy novels. His first novel, Eragon, was self-published in 2002 but was popular enough that Knopf Books published it in their young readers series in 2005. Christopher was interviewed as part of the opening ceremonies by another yearly writer/guest to Necronomicon, Timothy Zahn. The interview was fun and informative and officially opened the convention which had already been running for the previous seven hours. There were numerous other writers with tables displaying their works in the hallways next to the panel rooms. I’ve frequently started reading a new writer by picking up one of their books to get autographed at a convention. 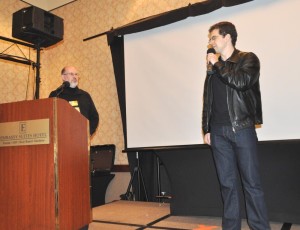 A staple of most cons is both the dealers room and the art show. The dealers room seems to be making a comeback this year with more vendors in attendance than I have seen in recent years. I remember when the dealers room would be packed but over the last few years it appears to me that the number of dealers selling science fiction/fantasy related ware has been dwindling so this is a positive development. One unique item in the room was a full size TARDIS from Dr. Who on display. 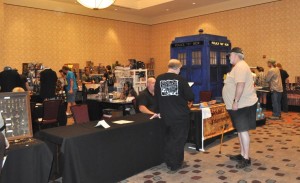 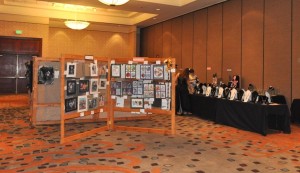 The art show this year was very small. In the past the art show has been quite large and was always worth a long browse to view and enjoy what the various artists had on display. So this year I was surprised to see how few artists were present and it was somewhat of a letdown for me. In the past we have on occasion purchased a piece and have a collection of small, humorous dragon sculpts as well as a few pieces of prints and paintings. For those who unfamiliar with convention art shows most of the art is auctioned and if there are multiple bidders they will have a final auction at the end of the show. Some items are available for instant purchase but most have to stay in the art room until the show ends.

Every con features a con suite where attendees can grab a bite and relax for a bit. The con suite at Necronomicon was on the eighth floor in a large room. The fare was typical of cons with candies, veggies, chips, and drinks available. On Saturday morning there was a selection of large and tasty muffins which lasted for a good part of the day. Necronomicon also features a Friday evening Igor/Ygor party and bheer fest sponsored by Dr. Morris. I attended the first few minutes and behind the makeshift bar a half dozen wanna-be bartenders were dispensing samples of various eclectic bottled beers. The problem though was that the samples were basically small sips and to actually partake of a full bottle would have required standing at the bar for a fair amount of time. Seeing the crowds waiting inside and outside the room I only managed two small sips before I took my leave for the evening. It was fun though and the participants were definitely enthusiastic.

The final event for Necronomicon has been the yard-sale styled market and eye-scream social on Sunday afternoon where you can pick up scifi/fantasy related things and eat all the “eye-scream” your stomach can hold. The proceeds from the yard sale benefit the Kids and Canines organization that works with high risk kids in Tampa teaching them how to train service dogs. There were a half dozen of the dogs at the con and they were wonderful animals. Stone Hill has given quite a large amount of money to the group over the years and obviously it is mutually helpful for both organizations.

That fairly well sums up the past weekend with a great convention. The event will move to early October next year and will be relocating to the Grand Hyatt at Rocky Point near the Tampa airport. The convention space will be about three times the size of this year’s con which should help alleviate the cramped hallways I experienced. Once again Stone Hill Science Fiction Association has put on a great convention that appealed to all the varied interests in the genre.