That’s the premise of Moishe Garfinkle’s letter to Physics today, in which he writes:

David Kramer’s piece (Physics Today, July 2012, page 23) concerning the importance of science to the general public and the public’s discomfort with science has provoked me to respond.

Science is dull and dreary to the general public and will remain so until we can achieve warp speed. James Kirk and Han Solo achieve it regularly and without ill effect. The public knows from Star Trek and Star Wars that warp speed is possible, if only we put the effort into it. Likewise, gravity is just an inconvenience to be overcome, and the public knows it can be overcome with little effort, to take us to the stars.

Let’s face it, when the public is excited about such events as the space program, Moon landings, and such, it is a triumph of technology, not science. All the science education in the world will not overcome the siren call of science fiction; it’s simply too exciting.

All one can hope for is that the small minority of the general public who appreciate science and scientific endeavors are those who have influence in the public media and the halls of Congress. In that regard we have been pretty damn lucky.

There’s at least one letter in response to Garfinkle that disagrees sent in by Andy Fraknoi:

I keep a website of astronomically reasonable science fiction at http://www.astrosociety.org/edu/resources/scifiprint.html and invite readers to sample some of the works featured there. A good number of PhD physicists and astronomers, including Gregory Benford, Alastair Reynolds, and Geoffrey Landis, are writing marvelous stories humanizing and extrapolating from our latest understanding of real science. Through such stories, science can become exciting and inviting, the very opposite of Garfinkle’s “dull and dreary.”

Even though Fraknoi didn’t mention me along with the better-known Benford, Reynolds, and Landis, I agree with him.  It doesn’t have to be “science” or “science fiction” winning in the public imagination.  It can be both, and often is.

My first interest in space, as a precocious six-year old, was my parents sitting me in front of the TV and turning on something they thought I’d like, which turned out to be Star Trek.  While I agree with Garfinkle that there wasn’t a lot of great science in the original series, it was pro-science featuring Spock as the super smart science officer, and it inspired me to want to learn more about space.  Those things eventually led to me becoming an astronomer.  And writing and promoting scientifically accurate science in science fiction as well, via Diamonds in the Sky and the Launch Pad Astronomy Workshop for Writers. 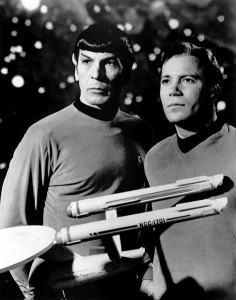 The daily slog of real life in any area has a hard time competing with the excitement of fiction, which cuts out all the dull stuff.  And every career has deadly dull stuff.  Rock star?  Practice ad nauseum.  Sports star?  Exercise and practice ad nauseum.  Emergency room doctor?  Medical school — need I say more?  Police?  Training, walking the beat, driving, writing reports.  Astronaut?  Even them, heroes of many a science fiction story, have endless drills starting months to years before a mission.

Garfinkle is complaining about something that affects every field out there.  Reality is rarely close to as fun and as interesting as fiction.  Somehow, a lot of people end up in careers and can still point back to a novel, tv show, or movie that helped inspire them to pursue those careers.  I can, and I’m not the only one.

Agree with Garfinkle, or me and Fraknoi?

If the latter, was there a fictional story or show that inspired you in your career choices?

If the former, do you support funding for NASA and space exploration even though it’s not as fast, easy, or as exciting as Star Trek?