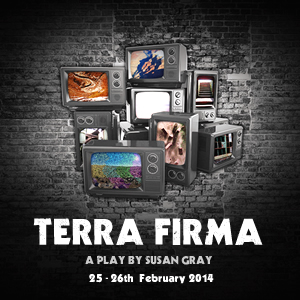 First of all – apologies for the lateness of this post! I’ve been busy in a good way – the first of my full length plays, Terra Firma, is having a staged reading in London that, as you can imagine, I’m pretty ecstatic about. I’ve thoroughly enjoyed the rehearsal process – it’s one of the parts I love the most about the whole job as it were. But there is a reason for me to mention this – apart from a glorified plug.That is – when I’ve read SF theatre resources, most of them tend to be solely about the script itself. SF theatre does exist; here are some synopses and timelines and so on – but why do we need it? How does the added dimension of performing the marks on the page benefit the genre of SF that we don’t experience when we go to the cinema or sit in front of the TV? What is missing and what can be gained?

The cast has been absolutely terrific; especially in their willingness to have a go at the interpretation of the words and the concepts. I’m very lucky to have a great director on board to really leave no stone unturned when examining each nuance, each turning point that the script provides. The conversations of how we could interpret this version of “altered reality” as closest to the way we live and have lived today. How we can act this out, seeing these speculative pressures affect our ways of living. I remember reading Jen Gunnels’ (the theatre editor of NYSF) blog Performing SF (who really gets the idea of analysing the importance of SF performance). You can find the site here. This quotation from August Schulenburg, artistic director, SF playwright and actor, from a guest post on the blog really drives this home:

Theatre is both a literal and symbolic act: that human body is really there, but pretends to be something else. This places theatre somewhere between the literal magic of film and the symbolic power of a book. The medium of theatre is the human body, and the imaginative acts it asks of its audience […] With theatre, then, it is with the human body that our imaginations find their primary point of engagement. Sci-fi theatre that tries to conjure the imaginative ask of a book or the detailed tell of a film will fail: That is not where its fundamental strength lies. Great sci-fi theatre lives in the power of a real human body reacting in real time to the imaginative pressures of speculative fiction. (Schulenberg, 2012)

As a result, the script of Terra Firma has transformed when it’s being visualised on stage – the aesthetics of a post-apocalyptic world, the devices of seeing and being seen being played out through a myriad of reflective sources (both explicit and implicit) emphasises the core messages of the play. It’s made me see the play in amazing new dimensions. This concept of the human body there, but pretending to be somewhere else – this really strikes a chord for me during the play, especially in rehearsal. Not only is there a distinct division between the characters’ personal and private demeanours, but also a disrupted temporality as the live and the mediatised struggle for dominance throughout the play.

In 2012, I staged a short one act play called A Christmas Gift, where I was not quite prepared for how intense it would appear in the performance. I’ve written about it in an earlier blog post here.

There needs to be, I feel, a deeper focus on the production of SF playscripts, analysis of performance and the emphasis on the “liveness” of this (and of course, the concept of mixed media playing a part in how our lives are becoming increasingly mediatized through social media and so on). These aren’t new concepts by any means, but they are topics that now need attention more than ever.

Terra Firma is having its staged reading at the Etcetera Theatre, London, on the 25th and 26th February 2014.