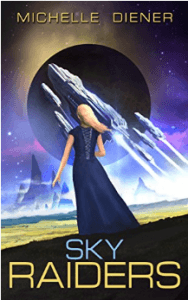 Michelle Diener, author of the much beloved Class 5 Series, has started a new set of tales, Sky Raiders, with several intriguing premises woven into the plot. My own brother, by the way, recently informed me that while my books would always be his favorites, Michelle’s were becoming a close second! Here’s the blurb:

When the people of Barit first saw the silver glint of sky craft, they felt awe. Then awe turned to fear. And they found a name for the mysterious newcomers. Sky raiders.

Garek’s one year of duty as a guard walking the walls of Garamundo was extended to two when the sky raiders appeared. Two long years away from home and his lover, Taya. When he finally returns, the town is empty. While Garek was protecting Garamundo, the sky raiders were taking their victims from his hometown.

Taya can’t bear looking into the night sky. All she can see is Barit, her home planet. Impossibly, the sky raiders have brought her and their other victims to Shadow, the planet that shadows her own, and looking up makes her aware of everything she’s lost. Garek is out there somewhere. She knows he’ll look, but he’ll never find her.

She and the other captives have to find a way to escape. Without the food and clothes the sky raiders bring them from their raids on Barit, they’ll starve on the almost barren wastes of Shadow. And when they’ve given the sky raiders enough of what they want, that’s exactly what the sky raiders will leave them to do.

What Taya doesn’t realize is she’ll have some help with her plan. Because Garek isn’t giving up on finding her. And he’s even more resourceful than she could ever have imagined.

Nothing is going to keep him from Taya. Not even space itself. 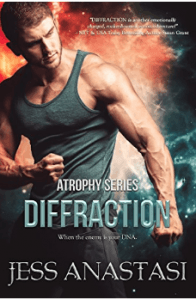 Australian author Jess Anastasi has added volume 3 to her exciting Atrophy series, with the novel Diffraction. The story:

After his unusual reaction to a weapon, Commando Varean Donnelly is accused of being a shape-shifting alien and imprisoned onboard the Imojenna. Sure, he has abilities he keeps hidden from everyone — including the gorgeous doc examining him — because the government makes sure people as different as him disappear. For good.

Imojenna doctor Kira Sasaki knows there’s something different about the handsome commando the captain’s thrown in their brig. She doesn’t think he’s Reidar, although he might have been a victim of their cruel experiments. But when Kira learns the stubborn commando’s racial make-up, she finds herself torn between defending him to Captain Rian Sherron and his crew or urging Varean to escape while he still can.

The Spires of Turris by Christine Danse has an extremely intriguing premise — I’m always fascinated by the idea of ancient alien civilizations that came before us in the galaxy, going all the way back to Andre Norton’s Forerunners. Of course a lot of other things are going on in the novel! The story: 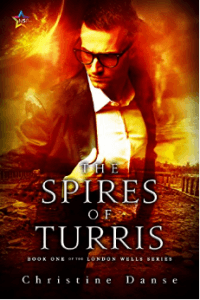 Dr. London Wells, linguist and adventurer, has the unique ability to understand any language in the universe, including the languages left behind by the ancient dead races of the Lost Planets — making him an intergalactic celebrity. But London likes his privacy — and he always works alone. No assistants, no entourage. When he goes on an expedition to a Lost Planet, it’s just him, the memory of dead aliens, and the resident man-eating fauna. He’s a self-sufficient sharp shooter whose insatiable curiosity can stand up to any danger.

Until he breaks his head falling from a cliff. That changes everything.

Now, after a long recovery, London is onto the greatest discovery of his life: a language to prove a connection between the Lost Planets. In order to investigate further, he’ll need to travel to an unforgiving alien planet. But he can’t go alone. That’s his dean’s last condition: either he travels with a research assistant, or not at all.

Unfortunately for London, graduate student Chas Chambers is not the only unexpected element on this trip… 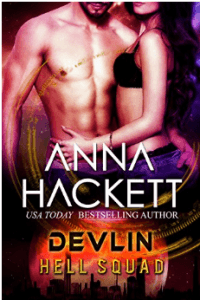 A covert mission gone horribly wrong. Cool, composed spy, Devlin Gray is used to bad situations, but locked in the bowels of an alien facility with tough, sexy soldier Taylor and told to mate is bad. Very bad. During his career, he’s had to lie and kill, he’s been betrayed, and he knows he works best on his own. Now he is forced to depend on Taylor, and together they have to find a way to escape before it’s too late…

Taylor Cates has already been to hell once before. She lives to fight for others, just like her mother once fought for her, and Taylor vows to do whatever it takes to escape the aliens. As she works with the sexy, suave Devlin, she starts to see glimpses of the man beneath the cool exterior. An exterior she soon finds she wants to melt.

In the worst of circumstances, a passion is born. But on the run for their lives, Devlin and Taylor soon discover far worse things in the alien facility: human prisoners and a weapon that could be the very downfall of the human race. A weapon that will threaten their friends, their home, and everything they hold dear.

For something totally different, another Space Fairy Tale retelling from authors J. M. Page and Juno Wells, The Alien Frog Prince. This is a short read at only 20K words and here’s the summary: 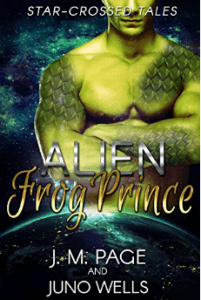 It’s not easy being green and unloved. Can an amphibious prince woo a socially awkward human?

Prince Zakrom feels like everyone on Granota has found their One — their beloved for life — except him. His worried parents send him to visit Earth, hoping it will distract him from his solitude. Zak finds more than a distraction: Jennifer, the lovely human at the Interstellar Embassy, is his One! But surely such a beautiful creature can’t be interested in a strange-looking alien like him.

But despite her constant gaffes, the Prince doesn’t seem upset. In fact, he seems to like her… rather a lot. When he invites her to visit his planet, will this unlikely couple finally have the chance to share an enchanted Kiss that will change everything? 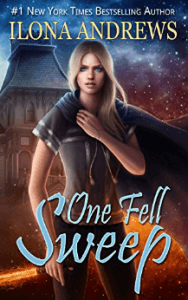 And I’ll finish with One Fell Sweep, book 3 in the Innkeeper Chronicles Book 3 from the husband and wife writing duo that is New York Times Best Selling author ‘Ilona Andrews’. I LOVE this series — it’s one where I’m compelled to read the newest book as soon as it’s released because I can’t wait to enjoy the latest adventures. It might remind you a bit of the “Men In Black” movies, with all these exotic events happening right under the noses of most inhabitants of Earth. The series combines science fiction elements with some paranormal aspects and I’d give anything to check into the inn. (Now whether I’d ever get to check out again…)

Dina DeMille may run the nicest Bed and Breakfast in Red Deer, Texas, but she caters to a very particular kind of guest… the kind that no one on Earth is supposed to know about. Guests like a former intergalactic tyrant with an impressive bounty on her head, the Lord Marshal of a powerful vampire clan, and a displaced-and-superhot werewolf; so don’t stand too close, or you may be collateral damage.

But what passes for Dina’s normal life is about to be thrown into chaos. First, she must rescue her long-distant older sister, Maud, who’s been exiled with her family to a planet that functions as the most lawless penal colony since Botany Bay. Then she agrees to help a guest whose last chance at saving his civilization could bring death and disaster to all Dina holds dear. Now Gertrude Hunt is under siege by a clan of assassins. To keep her guests safe and to find her missing parents, Dina will risk everything, even if she has to pay the ultimate price. Though Sean may have something to say about that!

What new books have you discovered over the holidays?

Steve continues his look at the first full year of Amazing Stories. This week it’s the third quarter of 1926.

Getting “Ginked” – the fine art of genre tattooing.

Another Star May Have Skimmed the Solar System 70,000 Years Ago – ExtremeTech