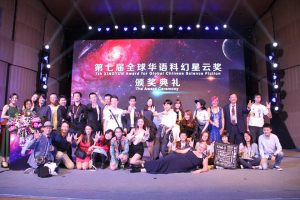 The 27th Galaxy Award ceremony was held on September 8, 2016, at the Morning Star Music Hall on the campus of Beihang University. It has been 30 years since the very first Galaxy Award in 1986 and this time, Li Yuanchao, the Deputy Prime Minister of China, made a speech during the opening of the ceremony in Beijijng. Eleven awards were presented; the list of winners were is below:

Three days after the Galaxy Award ceremony, the 7th Chinese Nebula Award ceremony was held on September 11, at the National Library of China in Beijing. Guests from the US and Japan were invited to the meeting. They were Cat Rambo, the president of Science Fiction and Fantasy Writers of America; Crystal Huff, co-chair of Worldcon 75 (the 2017 World Science Fiction Convention, to be held in Helsinki); Taiyo Fujii, Japanese science fiction writer, winner of Seiun Award and Nihon SF Taisho Award, president of Science Fiction Writers’ Club of Japan. The winners of the 7th Chinese Nebula Award are listed  below:

In addition, this year, the organizing committee decided to give out cash bonuses to the winners of the best creative work for SF movies, presented to the works that might be converted into successful screenplays.

A personal note: It is a triumph to see SF AppleCore win the gold award for best fandom. My friends who run and manage the events/activities of SF AppleCore have been working diligently for seven years. They have been sticking to doing what they enjoy and feel is right to do, even if there were difficulties. They have brought SF AppleCore through the years, and now they have been recognized by the entire SF community in China. Being one of their number, I am extremely happy and proud of this outcome.