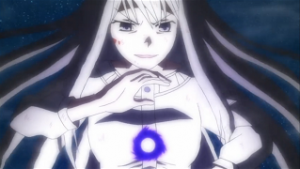 Brynhildr in the Darkness finale – In a final climactic struggle, Brynhildr is taken over by the moeblob that was implanted in it from the start and melts into a horrifying welter of codependency. Mako and Neko’s fight is basically over which of them is more in thrall to their alleged boyfriend, while Kotori sacrifices herself for the sake of both Ryōta and Chisato, and Kazumi is still so obsessed with Ryōta that she doesn’t seem to mind being cut in half much.

How was Kazumi healed? Why can Kana trade her foresight for mobility? How does Neko suddenly have all her memories back and the ability to conjure black holes, and then lose them again? Why does Kogoro make the spectacular breakthrough in replicating the anti-death drug right at this moment? The simple answer to all these questions and more is that the writer wants a specific ending, which is Ryōta and his cute and helpless girlfriend together happily ever after (or at least until a new series is greenlit).

This had such potential, and it wound up being a harem comedy in a horror disguise. I’m especially sorry I ever said anything nice about the mature attitude toward harrassment that it had in episode 1. I recommend this show to absolutely nobody. 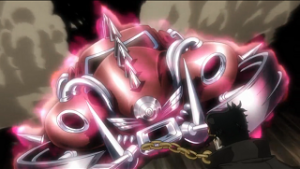 JoJo’s Bizarre Adventure: Stardust Crusaders #13 – Any minute I was expecting there would be a public-service announcement about testosterone poisoning. First Polnareff engages in aggressive driving, and regrets it. Then, Joseph and Jōtarō decided the obvious way to uncover a Stand user among the patrons of a roadside cafe is to attack everyone, but this only allows the Stand user to slip away. And then the muscle-armed Stand user and his fancy classic car turn out to be a scrawny coward in what my household auto expert identifies as a Mini Moke, just trying to put up a good show. Men: Don’t let your hormones override your intelligence!

Not that the main female character is doing much better, announcing that she has to see the world before she grows up because she can’t possibly be an adventurer once she starts wearing bras. What is Anne doing in the story at this point, anyway? She’s not serving as a damsel in distress, and they hardly need extra comic relief when Joseph and Polnareff are already around.

Next week… was that Avdol’s voice at the end of the preview? Or will they be facing some misty apparition or undead horror? 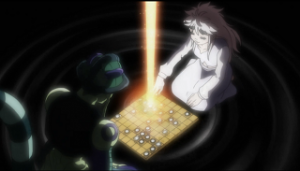 Hunter x Hunter Chimera Ant arc – Back at episode 100, I said that Hunter x Hunter had slowed too much to produce interesting commentary, but it would get a chance to rejoin the review lineup at the beginning of its next story arc. That time arrives next week, so first, here’s a quick overview of what’s been going on over the last 35 episodes:

There’s a big battle at the palace.

…um, and that’s it. Slow? I did not know the meaning of slow. This show was a kinetic whirl of plot twists when we left it compared to the pace it settled into later. To be fair, there are a lot of characters involved and they do undergo development. On the other hand, there are developments like the narrator’s increasing involvement as the assault on the palace starts. Not content to show us the details of every battle, the producers decided that we need to be told what is happening even as we can see it happening, with the result that just the final showdown takes two entire freaking seasons.

There are some good bits. If you’d like to catch the highlights, I recommend the Chimera Ant King meeting the first human to genuinely impress him (episodes 104-105), the story of how Netero learned to throw a wicked fast punch (episode 111), Gon finally coming face-to-face with Neferpitou (episode 116), their fight (episode 131), the explanation of what will eventually kill the Ants (episode 127), and the conclusion (episode 135).

In between those, a lot happens and yet, amid all the fighting and monologuing and narrating, practically nothing happens. Yoshihiro Togashi can write an intricate plot and gripping characters, but ye gods, the pacing.