For those of you who have read the work of Cherie Priest, you already know she can write. For those who haven’t, you’re missing out. This Hugo nominated and Locus Award winning author has a unique ability to take almost any setting and create a magical literary experience through believable characters and fantastic plot ideas. It doesn’t matter if her flavor of genre is noir, gothic, horror, steampunk, alternate history or science fiction, her undying approach in character development remains to be her most prolific super power in making her stories work. 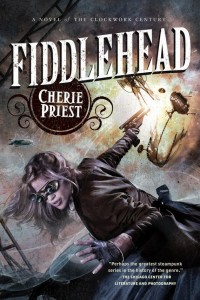 The novel Fiddlehead is billed as the final (full length) installment in “The Clockwork Century” steampunk collection by Cherie Priest (a sad thought to the many fans of the series). America has been ravaged by the Civil War for two decades. Rising from a world of slavery, inventor Gideon Bardsley creates a fantastic computer he calls Fiddlehead which predicts the outcome of the war. What does the machine tell us? If the war-between-the-states is not brought to an immediate conclusion, the zombie outbreak that has now started spreading from the northwest will inevitably consume the rest of the already decimated country.

Even though the Fiddlehead story is supposed to be the last novel in the Clockwork Century world (I say “supposed to be” because I’m selfishly holding on to hope that this may change in the future), any reader new to the series can and easily go back and enjoy the other books. Fiddlehead is thorough enough in plot and character development to stand alone, but it just might draw you in to want more. In case you’re wondering, the other entries in Clockwork Century are Boneshaker (2009), Tanglefoot, Dreadnought (2010), Reluctance, Ganymede (2011), and Inexplicable (2012). Fiddlehead was published in 2013 by Tor.

Don’t let the number of books dissuade you from starting here with Fiddlehead. Though there are a lot of characters who cross over from book to book, some casual while others are more impactful, each installment has its own stand alone quality. A good example would be the Pinkerton detective character Maria “Belle” Boyd who has already appeared in the series. Priest does a masterful job of filling in the holes so new readers will be as comfortable with the character as those who have already met her. But she also leaves a few hints to her past that just may peak your curiosity enough to draw you to her previous books.

History buffs will be delighted by the magical reincarnation of some of the nation’s more prominent figures as well. Abraham Lincoln may have survived the dreaded assassination attempt and left disfigured and dependent on his mechanical wheelchair to get around, but he is still an influential player in the outcome of the war. Abe’s friend Ulysses S. Grant has stepped away from his field command to take over the war torn country as the standing president (unintentionally uncomfortable poor choice of words there). While many other names, organizations and familiar places appear in the story, the steampunk and science fiction perspective never take away from the believability and continuity of the literary ties between reality and fiction. As a reader, I wanted to believe – zombies and all, so it worked.

I would have difficulty deciding which story in the Clockwork Century saga I liked the most, but as a closing chapter, Fiddlehead does a fine job of tying it all together. Cherie Priest has a knack for storytelling and has positioned herself as a prominent writer in the steampunk genre. As a fan, this reader hopes to see more.