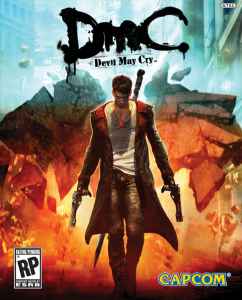 Video games have changed a lot since I was a kid—not just in graphics, but also in the way they’re played. Publishers want to put out more cinematic experiences, filled with elaborate stories and lots of dialogue. Sometimes it’s done really well, e.g., Max Payne, Alan Wake, The Longest Journey, but there is this disillusion or arrogance when it comes to the talent level of the developer’s creative team when it comes to storytelling.

The most recent example of this can be found in Team Ninja’s version of Devil May Cry. Now, the game was actually very well made. Yeah, it wasn’t on par, mechanically, with DMC 3, but it had better environments and bad guys. However, even for a video game, its story is just god awful.

The protagonist is Dante, a half demon, half angel bro. For whatever reason, he hates his father’s half and likes killing his demonic cousins; must be a momma’s boy. After a night of heavy drinking and banging strippers, he gets a knock on his trailer door and meets a Wicca chick who recruiting for an anti-government / corporation organization. But they’re not terrorists because demons are secretly in control of everything involving money.

The head honcho and overlord of the demon world is Mundus. And for whatever reason, he wants to rule over humanity by keeping them broke and hooked on evil soda which makes us all stupid and lazy—like we really needed any help with that…. Hey, while you’re at it, why not make a potato chip that makes people want to have sex!

Dante ends up joining the group which is operated by his twin brother, Virgil, who he forgot existed because he was purposely given amnesia as a kid to hide them from their mother’s killer and father’s captor, Mundas.

Fauxhawk is then sent on dangerous missions where he out swears demonic beings and tries to be funny by calling the fat demons fat, the ugly demons ugly, and the women demons bitches—except for the one he “hilariously” calls Barbie because she sort of looks like one, if it was mummified. Whatever happened to Joan Rivers jokes?

During the game we’re told of how Mundus is immortal and all powerful. Then Morgan Freeman pops up with a tidbit of information: Apparently, Mundus has an unborn heir, and if the gang can capture its mother, they can exploit the fetus to lure the god into a trap. Well, we all know how important an heir is to an immortal, heartless demon-god. So, needless to say, everything works out just fine. Or does it?

To capture the mother, Dante needs to battle mini Mundus. It sort of looks like blob Tetsuo from Akira. Anyways, it puts up a really good fight, but our fist pumper gets the job done. Now, to get what they want, all they need to do is hold the mother hostage with a gun. But this brilliant scheme goes pear-shaped when the unborn demi-god and its mother are killed by a Virgil rifle shot, through the stomach. Who would have figured a gun could take down the son of a deity? Well, to be fair, the Romans worked with less.

And did I say it went pear-shaped? I meant everything works out perfectly. Mundus is angered that his son is murdered, having been left with no one to never inherit his crown, and is easily taunted by DJ Dante into leaving his layer while a Deus ex Machina occurs. We find out Virgil simply needs to stab this hellgate, the source of Mundus’s immortality—located in Mundus’s main office, with his sword, and it will close it for some reason! And because Mundus is attached to his body, and his body is human, he’s no longer immortal!

Oh, and if you think that’s bad, the background workings of this world make less sense. The demons are running the show on earth but are supposed to be at war with the angels. So where are the angels? I don’t know; we never really encounter any. Why doesn’t the good god help you fight the bad god? Why does Dante even want to champion humanity? How many plot holes can exist in a story so simple?

This lengthy example is one of many reasons why I don’t love all the games people rave about. I read; I write; I expect more professionalism. Hire a real writer if you’re going to tell a story. Stop trying to do it yourself or by committee. Hell, you could buy a better script for 20 bucks from a Care Bears fanfic writer.

I may be a bit harsh, but it’s true. So many of these companies spend millions on making a game and not a dime on a story. It makes so little sense to me. Yeah, if a game is fun to play and has an established brand, it will make money. But think how much more money you could make with a compelling, memorable story.