Enough time has gone by to justify a re-read of this instant classic. 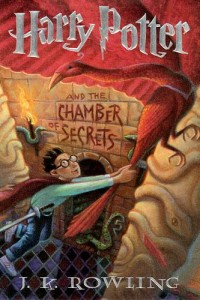 My mission to reread the entire Harry Potter series to my wife’s pregnant belly continues in this semi-review of The Chamber of Secrets. The good news is my wife has been feeling a lot better. Her nausea is down, her hunger has returned and her spirits have increased. Now the bad news: this book is probably my least favorite in the series.

For those who don’t know, book two features Harry’s second year at Hogwarts marred by random attacks by a mysterious monster that petrifies its victims. The monster hails from the “Chamber of Secrets”, a hidden lair inside the castle allegedly built by the founder of Slytherin House to be opened by his “heir” to drive the “mudbloods” (witches and wizards born from Muggle parents). Harry, and his friends Ron and Hermione, investigate the attacks and deal with the growing suspicion that Harry himself might be behind the violence as he discovers just why the Sorting Hat considered putting him in Slytherin.

The book deserves praise for addressing racism, which is something that is rarely discussed with children, but I feel the book has some flaws. Certain themes, like self-sacrifice, are recycled from the last book, too many false clues and when we finally meet the actual Heir of Slytherin, we discover it was Voldermort all along…just like the last book. It is almost a copy of the plot from The Sorcerer’s Stone, with Fawkes tears standing in for Harry’s magical protection from his mother. Harry is not saved by his skill, but by a convenient deus ex machina that arrived just in time…again.

While rereading this book, a part of me wondered where exactly Slytherin’s pure blood mania might have come from. Rowling does not give us many great examples of Muggles in this universe to begin with. From the Dursleys’ child abuse of Harry to the boys who tortured Dumbledore’s sister, Muggles are a pretty awful lot from the perspective of magical folk. Muggles have even been known to kill wizards, as was the case with Nearly Headless Nick. Although being able to use magic gives witches and wizards an advantage, certainly the Muggles numbers means that in stand up fight they will win in the end. If we assume that Hogwarts has somewhere between 300-1000 students and it services all of Britain (and perhaps Ireland as well since the British Minister of Magic was present at the Quidditch World Cup, not the Irish one), then the magical population of Britain is only a tiny fraction of the population.

Even the information on the International Statute of Secrecy suggests that it was out of fear of Muggle persecution that the magical folk went into hiding, instead of the simple desire to not be bothered for magical fixes to problems like Hagrid said in the previous book. If this is true, then doesn’t this change our entire perception of Salazar Slytherin, the founder of Slytherin House? Perhaps, like Snape, he is misunderstood. His desire to only accept “pure bloods” into Hogwarts could have been done out fear for the danger represented by Muggles. Is it that hard to believe that a child in Medieval Britain would run and tell his local priest/lord that evil was afoot when he or she received their Hogwarts letter? His fear could not have been that ridiculous because the entire magical world eventually agreed to separate themselves from the Muggle world forever.

Let me take this opportunity to state that I am not condoning the pure blood mania of Voldermort, Malfoy or the other dark withes and wizards. Certainly whatever value Slytherin’s idea had were corrupted by wizards and witches who did not want to compete with other magical folk who grew up outside their world. Let’s not forget also that Slytherin’s solution to the Muggle-born problem was to create a time bomb to kill children (well he was a Medieval wizard, different perspectives on violence and all that, see A Song of Ice and Fire). Still it is interesting to speculate on who Salazar Slytherin was, because with the exception of only a couple characters, Slytherins are just as bad as Muggles in the Harry Potter universe.

So I got through what was likely the most difficult book for me in this great reread. Next up is The Prisoner of Azkaban, which is actually my favorite film in the Harry Potter series (my favorite book is still a couple books away). My wife has reported that she feels a fluttering below her navel that she believes is Baby Mitro moving. Hopefully his/her ears will start working soon so they can hear my character voices improving (I still don’t like my Dobby one all that much) and perhaps he/she might even be around soon so that I can read directly to my child.

For a lifelong reader like myself, that sounds like an amazing experience that I cannot wait to have.

Videos from authors, a new anthology and the creation of a new SF & Horror association

Announcement of the publication of “1818: Origin. Anthology of Hispano-Mexican” speculative fiction.

On Fandom Activism and the Logical High Ground