Like many other temps, Anna works for a soulless company with little regard for the people it uses up. The only difference is that she temps in the underworld of supervillains 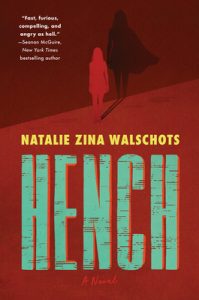 Like many other temps, Anna works for a soulless company with little regard for the people it uses up. The only difference is that she temps in the underworld of supervillains, which answers the question I know you’ve been wondering. Where do all those henchpeople come from and why do they do the villain’s dirty work? Because it’s a job.

Of course, it’s a pretty dangerous job, but Anna stays out of the line of fire by specializing in spreadsheets for supervillains and working from a safe distance. Until she makes the mistake of getting bored and coming to her current boss’s attention, leaving her safe cubby to do fieldwork.

What she get’s out of the deal is a shattered femur and cancellation of her temp contract. Her best friend June puts her up while her bones knit back together, and though Anna can’t walk, her brain is working overtime. Being out of work is costing her a lot, not to mention the cost of treatment, and she’s just one person. How much damage does a superhero do daily, and is it worth it?

Granted, she’s technically a bad guy because she’s working for a villain, but is the damage inflicted commensurate with the evil they’re stopping?

As a data analyst, Anna is the perfect person to find an answer to that question, and when she does the cost of superheroes is so unbalanced with the good they do that it’s nothing less than diabolical. So she starts a blog, which gets a lot of attention, which freaks June out.

June’s not cut out to be a supervillain. Villains, as someone tells Anna later in the book, are people who “seek vengeance and power when the world punishes (them)”. OK, he says it in an intentionally over the top voice, so it’s less corny.

Anna’s not too surprised when the ride she’s supposed to take to a job interview turns out to be an abduction, but what she didn’t expect was that she’s being shanghaied to a different job interview, one with Leviathan, the most powerful supervillain in the world. He likes her work.

Suddenly she’s living on a secluded campus with all the resources she could want and the data analytics team of her dreams. Think Google for Villains. June, by the way, freaks because the last she saw of Anna was her being “invited” to get into a mysterious car and then disappearing.

Leviathan doesn’t seem to have much interest in terrorizing the world, just brining down superheroes. In particular, Supercollider, the golden boy of the superhero pantheon. They’ve got history, and Anna’s analytic tools are just what Leviathan needs to bring him down.

In the golden age of Science Fiction, scientists and engineers would write stories about the technology they were exploring in IRL. Natalie Zina Walschots’ real-life expertise is in game design, social media, and assorted villainy, and in its own way what she’d written in Hench is hard science fiction. Not because superpowers are scientifically explainable (they’re not) but because the real technology Anna uses to spell doom for supers is data analysis, a social media influencer toolkit, and lots of really good spreadsheets.

There’s a military term of art, Maneuver Warfare, that says the way to win a war isn’t to amass an army and overwhelm the enemy but to figure out where their key elements are and take them out of the picture. You can’t overwhelm a virtually indestructible hero with force, but you can take away everything that holds them up, from friendships to reputations.

In the end, the final fight with Supercollider does come down to a one on one with another super, and the outcome gives new meaning to the term “quantum entanglement,” but in large part, because it’s hard for people to give up the desire to go mano a mano and get revenge up close and personal.

As Anna becomes more and more important to Leviathan’s organization, and as heroes begin to understand the threat she poses, she comes into her own as an actual supervillain. Her supervillain name, “The Accountant” starts as a joke tossed off by a hero who doesn’t swoon when he hits on her, but soon becomes a feared title that she owns.

Tales about the devolution of the superhero are no longer the exception, following a long tradition started by Marvel’s wisecracking characters who broke from tradition by questioning their roles. Followed by series like the Watchmen, The Tick, and The Boys, all of which started in print and made it to the screen, the secret that superhero is an oxymoron may be out. What Walschots manages here, besides entertaining us, is to reveal the fallacy that anyone is benefiting from the hero’s work and that the villain/hero dichotomy is as false as any image made from only black and white, when everything is a shade of gray.

This is a debut novel, though not the first bit of writing that Walschots has done professionally, writing “everything from reviews of science fiction novels and interviews with heavy metal musicians to in-depth feminist games criticism and pieces of long-form journalism.” That’s reassuring because the level of writing in Hench is so good it would be a shame if it was all we could expect from an author who poured everything she had into one book. There’s little chance of that here.

Oh hi! I’m glad you’re back! Or maybe you’re visiting me for the first time? Either way, I have a wonderful little book of poetry to introduce you to today: The House of Forever, by Samantha Henderson This volume of collected poetry comes to us from Raven Electrick Ink and is edited by publisher/poet Karen […]

The authors inhabit Kyoshi’s inner world so seamlessly that all of her actions and development make sense, including her relationship to love. I loved that her queerness was treated as a normal part of her…