Yes, it’s true. Most older folks suck at playing video games. The real question is – do they care? 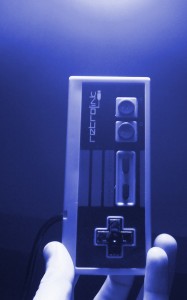 There was this time, way back, when I’d laugh at the idea of my parents playing a videogame. I mean, sure, they had some fun with Pacman and Mario Bros., but it was a novelty for them. Naturally, us kids were better because we took to it with the obsessive, hedonistic passion that would’ve made Aleister Crowley proud. So, with all those childhood hours invested, surely we haven’t become the ham-handed controller wielding doppelgangers of our technologically unhip, parents – have we? I hate to break it to you, but here’s five reasons why you now suck at video games.

Not only are we no longer the target demographic, but we can’t even understand who would be. Also, new releases feel very been there / done that. We’ve already rescued the princess, defeated all eight robot bosses, figured out how to get around Sagat’s tiger uppercut, and put countless virtual bullet holes in nearly everything imaginable. At some point we had to grow up, become a little less shallow and want our sexy games to be smart and interesting, too. We’re simply not as good because we’re not inspired to get any better.

2. We Aint Got Time to Bleed

We’re adults. By the time we could accumulate enough hours to master a game like our 13 year-old selves on summer break, the next two in the series would be out. But even if that wasn’t the case, we still have more important and better stuff to do – like other adults.

If playing games with kids teaches us anything, it’s how much we don’t miss being one. We end up avoiding a lot of online multiplayer because of trash talking teenagers and emotionally stunted 20-somethings. It’s not that we get offended. It’s more that we’re made to feel very awkward, like we’re hanging out on a school playground, fighting with children about who gets the use the slide next.

Like your awkward uncle hitting the dance floor at your cousin’s wedding. We know you kids take your gaming seriously, but we don’t, won’t, and can’t. Back when we were pimply faced grease traps, sure, but now this is just another part of our wind down, not up, ritual. Barkeep, I’ll take another rye and water to go with my 10 loss streak.

We don’t need the latest and greatest thing on day one, especially when it means saving a buck. But it’s not just one is it? No, if we wait a year, we can get a new game at a third of the price. As we’re adults with bills to pay, this is often our only choice. Being a grownup in the digital age of gaming means being a year behind everyone on the learning curve. Simply put, we suck at games because we must to keep a roof over our heads.