Home News A Fan’s History, Part the Next….

Back to the Futu… er, Fanzines. In this blog entry, I’ll be reviewing some “dead tree” fanzines as well as what is probably the standard these days: live pixel zines, or dead bytes, or something like that. (Can’t say “dead pixel,” because that means you’d probably need to replace your monitor. If you’re like everyone else, the few dead pixels on your monitor draw your eyes like a magnet, and make you at least a little bit crazy.)

We start with a fiction/poetry fanzine—on paper—that’s been around a while, I believe over twenty years. It’s John Thiel’s monthly, Pablo Lennis number 309. The cover is a photomontage of Machu Picchu by Ramos Fumes, which might be illustrating the story “The Living Kuma Bama Ca Cat Statue” by Sedalia S. Sanders. I seem to remember hearing about this zine years ago, but this is my first encounter with the actuality. It’s a strange little photocopied (or maybe offset; I can’t feel any toner on the pages) throwback to fanzines of years ago. It appears to be done an old-fashioned way: typed with an IBM Selectric (the script face is very distinctive; I used to have a script ball for my Selectric—when I had a Selectric, 30 years ago—but the script font’s too hard to read, so I seldom used it), artwork traced over in many cases with a dark pen to make it easier to reproduce, and pasted up. This gives it a very old-fashioned “fannish” feel that gives me a strong feeling of nostalgia..

The artwork is very variable; the majority of it is, I’m sorry to say, very awkward and amateurish, especially the cartoons by G.F. Heyder. About all I can say about the art is that, oddly enough, it adds to the nostalgic feel of the zine. For some reason, I find it charming.

The fiction and poetry are likewise very variable, but here there is more to choose from: the main story, “The Boy With No Name,” by Lawrence Dagstine, is very well written. I fail to see that it’s a genre story, unless I missed something, but I’ll take good writing over bad genre writing any day. The rest of the fiction is unremarkable, and the poetry didn’t really strike me. But that may be my failing, as I was raised on a diet of older, rhyming poetry. There’s a review column and a letter column. The zine is available from John Thiel, 30 N. 19th Street, Lafayette, IN 47904, for trade, LoC (remember, LoC stands for Letter of Comment) or included fiction, poetry or article—or for $20/year.

My next one is an ezine (specifically, a PDF), by one of Europe’s prime fans, Wolf von Witting. I had thought he was German, but according to his email, he’s in Sweden—but according to his address, he’s in Italy. His quarterly zine is called CounterClock, and is in English, but concerns itself with the doings of fandom all over Europe. The first non-American fans I met, back in The Day (okay, 1980) at Denvention 2 in Denver, were a pair of Swedish fans named Anders Bellis and Ahrvid Engholm. Or that’s how they characterized themselves to me and my friend Jon Gustafson (my co-editor/art editor for New Venture). Jon and I spent a goodly amount of time at that convention with Bellis (as he now styles himself) and Ahrvid. From them I learned that European fandom takes itself—or fannish conventions (not Conventions)—very seriously, drinking bheers, and swearing by Ghu and Roscoe and stuff like that there. (Don’t ask. We fans from the hinterlands never took Ghu or Roscoe seriously, just thought it was silly stuff. It is silly stuff, just invented for fun.)

Now, through the pages of CounterClock, I learn that European fandom is alive, well, and still—at least according to the cover photo, which appears to be of Waldemar Kumming being inducted into the Order of St. Fantony by one of Germany’s premier SF writers, the late Walter Ernsting—taking all that fannish stuff seriously. (Okay, I’ll bet a lot of it is tongue-in-cheek.) I recently got in touch with Anders Bellis again, after a 30-year hiatus, and lo! here’s an article in CounterClock by that same Bellis, about the discovery of Greek fandom. (See, Bellis is only half-Swedish; he’s also half-Greek, and now lives in Greece and has never—until THIS year—discovered that there was a Greek fandom!)

There are also articles about “Gerfany”—German fandom, French fandom, Perry Rhodan convention-going, various other convention reports, and lots of stuff that is just plain fascinating to a North American fan, especially one like me who’s been out of the loop for so long.

(Did I explain to you about “Gafia”? Well, GAFIA is an acronym for “Getting Away From It All” in a fannish sense, or leaving organized fandom. Sometimes you can be forced away from fannish life by life itself—called Fafia, or Forced Away… you get the picture. Hey, after my divorce in Alberta, I kinda Gafiated for a few—no more than fifteen—years.)

There’s a LetterCol, including a letter from Greg Benford and many European fans’ letters, and lots of cartoons by Teddy Harvia and the late Arthur Thomson (ATom, who I didn’t know had died) and some illos by von Witting himself. Because it’s a PDF, the included photos and cartoons/illos are very good quality. This is a side benefit of efanzines; you don’t really have to worry about bad reproduction, which was a constant worry to those of us who produced paper zines and wanted to produce the best quality zines.

I find it a joy to read: it’s a more or less serious zine—reportage, etc.—that doesn’t take itself too seriously. Since it’s an ezine, you don’t have to pay for it, just go to efanzines.com; if you enjoy any of the fanzines on that site, you can always contact the editor and offer a couple of bucks. Even ezines cost money to produce, y’know. 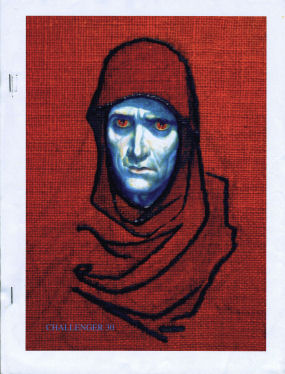 Okay, I’m going to do one more zine this time—and I have an older one that came in the mail and has a killer Kelly Freas cover—but I’m going to review the newer one available from efanzines.com. This is Guy H. Lillian III’s Challenger. The most recent one, dated 2013, is number 36, with a cover by Alan White. The orange cover you see here is from number 30, by Kelly Freas, the late master artist of the SF field; I couldn’t resist putting the picture in here. I’m a big fan of Kelly’s work and have a portrait of me painted by Kelly in my office. It was a gift from the late Verna Smith Trestrail, the daughter of E.E. “Doc” Smith; it’s a long story, which I’ll get into in a future blog entry.

Challenger is a genzine, which means it is a general zine, not trying to be anything specific, but basically covering whatever the editor (or in this case, editors—Guy has taken on a co-editor, his wife Rose-Marie. The 80-page PDF is chock-full of stuff; illustrations range from photos (from the Apollo 11 pre-launch party, no less!) to Rotsler cartoons; from b/w Lee Hoffman cartoons to full-colour Brad W. Foster designs. This is a lavish zine by a long-time fan. (I’m referring here to number 36, not to number 30.)

Guy, whom I’ve never met, darn it, seems to be or have been a lawyer. He and his wife live in Shreveport, Louisiana,  and this is the kind of genzine many fans would aspire to, if they wanted to do a top-notch fanzine. As Guy says, it’s the fan, rather than the subject, that makes a fanzine fannish, so the zine consists of whatever he wants to publish (including a long, funny article about being a lawyer at the Superbowl) even if it’s not particularly genre.

There’s an article, as I mentioned, about the Apollo 11 pre-launch party, with lots of photos of Robert A. Heinlein, Arthur C. Clarke and Dave Kyle, among others; there’s a Chicon 7 diary by GOH Mike Resnick; there’s fiction by Greg Benford and Joseph Major, there’s an article (complete with the obligatory boob photos) about Mardi Gras in New Orleans, there’s a LetterCol and so much more.

This is a dream genzine, folks. It’s what fanzines should be, but most often aren’t. Again, it’s available from efanzines.com.

I have any number of other zines I’d like to get to, but this is becoming a rather long entry. I’ll pick it up again next week.

Coming up: more fanzine reviews, fannish fandom,  and other stuff. To Infinity and Beyond! Or something like that.