Home Anime/Comics Anime roundup 8/23/2013: Your Princess Is In Another Reality

Yeah, Space Brothers went there again. Therefore, it has been duly dismissed until such time as it makes itself suitable for this century. 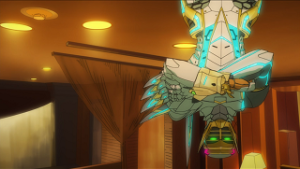 Gatchaman Crowds #6 – Hajime might come across as an airhead who wants to live her life as a tribute to ADHD most of the time, but every now and then she has a chance to remind us that she’s a smart gal who really does know what the hell she’s doing. Or, she’s terrific at pretending she does.

So now Rui has given his smartest potential antagonist a quick demonstration of how his revolution is probably going to work. And not only is she smart, she’s the sort of person who’s confident enough to even stand up to her own team and throw standard procedure out the window. Rui doesn’t stand a chance.

That assumes Rui’s revolution was going to work the way he planned, anyway. It’s still not clear where General X came from– is it Rui’s creation, or another gift from the evil alien? When it comes time, he may find that the GALAXters are taking orders he never gave.

Oh, and about the “GALAXters”… It’s worth mentioning at this point that the enemy in the original Gatchaman was named Galactor. 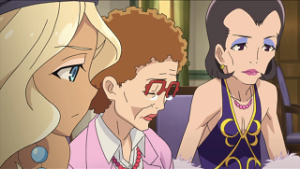 Day Break Illusion #7 – To explain what’s going on with Luna this episode, it’s time to dip a toe into the fascinating and complicated topic of Japanese honorifics.

The best known one is -san. The beginning Japanese learner is taught to stick that after everyone’s name, and it’s a nice generic one that gives you few opportunities to get into trouble.

One you might use with women or children you are on friendly terms with is -chan. It pops up, for instance, with the little girl near the ice cream cart calling her sister o-nee-chan (“Big Sister” + -chan). The Tendo sisters use the baby-talk variant -tan, referring to Akari-o-nee-tan (“Big Sis Akari”).

With very good friends, you would use no honorific at all. And there we have the point of Akari’s line about “my friends, Ginka, Seira, and Luna-chan”. They’re all friends, but Luna isn’t quite as close a friend as the other two.

And that’s why the subtitlers include the honorifics. Good luck to the dub scriptwriter who has to try to communicate the sense of it without getting to use them. 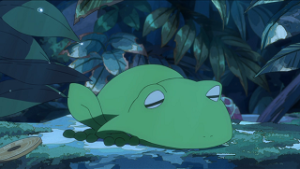 The Eccentric Family #7 – That must have been the least fanservice-y bathhouse episode ever, not that I’m complaining.

It was hard to tell for a while what The Eccentric Family was actually going to be about, but it seems we have a whodunit. How did a tanuki who could impersonate a mountain for a week fall victim to mere humans? Was he really that drunk? He seemed lucid enough when Professor Yodogawa talked to him (assuming Yodogawa is a reliable witness, anyway). I’m still not convinced there was any actual tanuki in that hot pot.

Moreover, it seems like Soichirō Shimogamo spent his last known day the way he would if he knew his family wouldn’t see him again, doesn’t it? Taking his eldest son and heir around to talk to the elders to make sure he’s on good terms with them, and then spending a happy evening with the other son who’d be able to remember him well? Did he have some kind of agreement with Benten to be the price of her entry into the Friday Fellows? 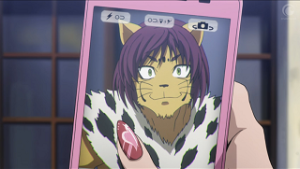 Hunter x Hunter #93 – And I thought Killua had it bad, being a former child assassin– now suddenly we find out about Gon’s previously unrevealed past as an escort. At least his cousin Mito was chaperoning him. No, never mind, it’s still creepy.

But this whole date plot seems to really have been brought up to bring out Killua’s feelings. Is he becoming distraught simply over losing the chance to spend some more of the remaining time he has with his best friend, which would be perfectly normal behavior for a shōnen protagonist, or something more? Hunter x Hunter has never been one to do the obvious thing, but I’m not sure yet.