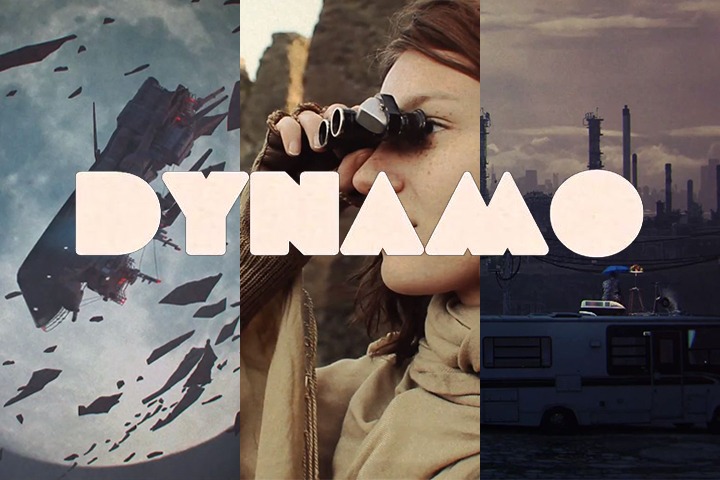 If there’s a recently popularized term that leaves a bitter taste in my mouth, it’s “webisodes.”  This demeaning and fun-sized determination of quality stems from the misconception of tacked-on extra content pumped out in the form of mediocre flash animation with a slim chance of the original creators’ involvement.  Basically, it makes me worried that others think a series made for free consumption online just can’t measure up to a series airing on television.  As the blighted word has become ever more present, so have the number of online series that feature content that trumps a significant percentage of conventional shows.  Dynamo by Ian Hubert & Scott Hampson is such a show.

Currently only 4 episodes in, this series has presented a fictional universe unlike anything I’ve seen.  It rapidly shifts through homages and deconstructions of film genre (something I greatly revel in), all the while providing an exciting narrative that never fails to leave the audience with an abundance of questions.  As it stands now, I probably could ask more relevant questions as to the nature of Dynamo than I could discuss the content.  Hell or highwater, I will do my damnest to explain a mostly spoiler-free description.

A mysterious man with an amazing beard appears in the Wasteland outskirts of the city Shade located in Exemplar State.  In the universe of Dynamo, there are a multitude of worlds with little to determine just how they’re connected – except that people can travel between them.  The city mirrors our own world more than any other but glistens with the faux-metropolis gleam of futuristic efficient smashed into urban squalor.  It’s smoggy, faded, and run by rank-based government entity called The Super Intelligence.  Currently, a plethora of seemingly important characters and concepts have been introduced, only some of which the series has begun to delve.  We meet a young woman raised on Akira Kurosawa films in the Wastelands, a hapless man haunted by dreams of inane tasks presented as tests, a disturbingly interminable government agent with a deadly secret cloaked in darkness, and the mute man who ties them all together, Axle Rubix.  What the series appears to be entirely focused on is World Building and judging by what’s been shown already, this story is being portrayed on a stunningly massive scale.

It’s truly exhilarating that such a small team of creators working off an ever-evolving platform have undertaken and (so far) delivered such magnificent content.  Something that excites me tremendously is that the huge majority of the CG work (if not all of it) is done with the open-source program Blender.

The most straight-forward way I can describe this show is to take some nuance and surreal elements from the first season of Twin Peaks, mix in characterization and the loving ability to eschew conventional science fiction/fantasy tropes from Firefly and drizzle the concoction with the jaunty quirkiness and gigantic world of The Fifth Element.  Now you know where I’m coming from.

Lastly, I would like to speak on their editing capabilities.  There’s always something to be said on how a production comes together and these gents have got post down pat.  Visually, the CG rendering and graphical effects are used tremendously well – but more importantly for me, the sound is just masterful.  There’s a deep understand of the history of sound in film and what kind of sound is expected in specific genre of film present in Dynamo.  The choice of score only furthers this point as Wasteland scenes are accompanied by lonely woodwinds flutes interspersed with rare guitar strums and the ever-present whistling wind – which serve to to make the audience feel the vast desolation of the region.  The techno-urban cityscape has a sound that suggests a life of chrome and forced ambivalence, which is suited for the context of the setting.  My favorite, however, are the title and test sequences that have music which offers a discordant sense of antiquated lightheartedness that adds a wonderful foil to the series.

All in all, this show has a fantastic sense of fiction, world building, genre blending, and ability to create genuine narrative that forms something altogether unique.

You can find out more information and all current episodes on their website: KARMAPIRATES