When people think about science fiction the first thing they usually visualize are spaceships (or green skinned women in shiny bikinis, but that may just be me).

The spaceship has been a ubiquitous part of SF since the beginning and depicting such a thing has been a challenge that many artists have tackled with varying degrees of success. Of course the highest degree of challenge would have been with the artists who were working before the advent of the Space Age.

Chief amongst these artists in the early part of the twentieth century was Frank R, Paul. At a time when most Americans didn’t even have a telephone, he was painting robots, aliens and spaceships. His designs seem clunky and inelegant to us today but at the time Paul took what he knew about aviation and electronics and transformed those into wild images of the future.

Paul was born in Vienna, Austria and emigrated to the US where he was discovered by Amazing Stories publisher Hugo Gernsback. Paul’s work would go on to grace more than 40 covers for that periodical as well as the insides. His artwork also appeared on covers of other science fiction pulps including Science Wonder Stories, Air Wonder Stories and Planet Stories.

Paul’s compositions are dramatic and bright and his colors garish. He had a limited ability to depict human faces but when it came to enormous machines, Paul excelled. One cannot understate how important Paul was to developing the visual language of science fiction. His spaceships were somewhat clunky and inelegant, but they were seminal. Paul can also take credit for being one of the first artists to depict a saucer shaped spaceship long before that particular iteration entered the mainstream. 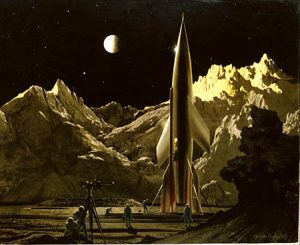 While Frank Paul was a pioneer of science fiction art in the pre-Space Age, Chesley Bonestell would go one to have a tremendous influence on the development of the real thing. Described as the father of modern space art, Bonestell’s spacecraft designs would sear themselves into the imagination of a generation and eventually find their way into the real things.

His were the tall and sleek rocket ships made of shining steel. Coming from a background in architecture and engineering, Bonestell’s spaceships were technological perfection personified. His images were used by space pioneers like Willy Lee and Wernher Von Braun to show that manned spaceflight was not merely a childish fantasy but was a nascent reality that lay just beyond the metaphorical corner. Hollywood as well sought out Bonestell’s designs. In the 1950’s producer George Pal highlighted his spacecraft in films such as Destination Moon and When Worlds Collide.

Bonestell, more than Frank Paul before him, seared the image and the idea of a space ship into the public consciousness like never before. His ethereally beautiful paintings of the landscapes of other planets filled the viewer with an incredible sense of wonder, but it was his spacecraft with their technical precision and sense of utter reality that left the viewer with a strong sense that getting to those landscapes was a real possibility.

Minnesota born John Berkey got his start painting space scenes in the 1960’s as an artist for NASA. He was commissioned by the Space Agency to produce illustrations of the astronauts involved with the effort to get to the moon. But it was his paintings for Ballantine Books STAR series in the early 1970’s that caught the attention of science fiction fans. Soon his spaceships were in great and constant demand for the covers of science fiction novels.

Berkey’s spaceships are massive constructions. Their huge central bulk suggests that an ant-farm like network of corridors and crew cabins reside within within. For all his spaceship’s bulk, however, they possess a grace that belies their size. The central bulk tapers out to wing-like structures that are almost like fractals as the pattern of their construction repeats itself in smaller and smaller iterations until the structure tapers off into nothingness. His brushwork suggests multifaceted shapes adorned with intricate details. This ships don’t just float through space, they seem to sing through it.

Berkey’s spaceships are beautiful, believable and awe inspiring. They have an undeniable quality of power. Despite their being no sound in space, the viewer can almost hear the rumble of massive engines that throw out long and impressive plumes of red and yellow flame as his spaceships power their way through the void. The depiction of the spaceships from Star Wars was a natural fit for Berkey’s style and he did a number of paintings for Star Wars posters.

Berkey’s style was loose and painterly, yet his images give such a vibrant impressions of being hi-tech. He has defined the look of the modern spacecraft and computer artists who are creating spaceship images today owe him a huge debt of gratitude for inspiring their designs.

Today there has been an explosion of spaceships and they come in all sorts of different shapes, sizes and colors. Particularly with the advent of Photoshop, digital photography and other computer generated imagery, rendering a spaceship has become, literally child’s play. Has that cheapened the depiction of space scenes and spacecraft? Has the visual language become corrupted by the intrusion of this electronic depiction?

On the contrary. Today, more than ever, artistry is important when it comes to imagining and depicting spacecraft 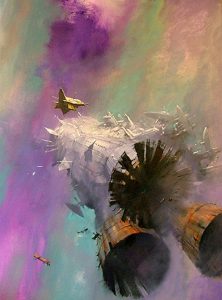 John Harris is a British painter and illustrator. Born in 1948 in London, England, harris began painting at 14 years old. He studied art and painting in England before traveling to India and studying transcendental meditation. When he returned to England in the mid 70’s he began producing paintings with the common theme of monumental scale and space.

Harris’ spaceships have just that: a sense of monumental size and gigantic scale. Set against space backdrops that eschew the traditional black, Harris’s spacecraft are just as likely to be set against a purple or lilac or sky blue space, rife with clouds suggesting vast clouds of interstellar dust. The spacecraft themselves are rendered in a gamut of colors, from pastels to deep blues or even vibrant orange. Like Berkey, Harris has a painterly style featuring bold brush strokes that suggest incredibly technical detail. But what makes his ships stand out is the way he evokes the sense that what you are seeing is on a massive scale. His work gets across the immensity of space in a way that few other space artists have in recent years.

Harris’ work is highly sought after in the publishing world. His spacecraft have adorned the covers of books by Ben Bova, Peter F. Hamilton and Jack McDevitt, luring readers in with promises of the wonders of far-flung worlds and mind-bending technology.

I’ve only touched on four major artists in this post. There are many more and so many more working today then there have been at any time in the history of printed SF. If I have missed a particular favorite artist of yours or if I have gotten anything wrong, don’t just sit there and stew about it. Use the comment box. Tell me and the rest of the world about it.

So Who is the Doctor?