When I offered to review Starship Troopers for Steve, he hinted that I should review the other two books in the triad (as defined by Heinlein): Stranger in a Strange Land and The Moon is a Harsh Mistress. I thought about it for quite some time before agreeing; on one hand, I detested Stranger and had pretty mixed feelings about Moon, but at the same time I considered that reviewing the books might help me sort out my own feelings. And so, without further ado, Stranger in a Strange Land.

Stranger in a Strange Land, perhaps the weirdest of Heinlein’s books – it is certainly unique amongst his writings – is Heinlein trying to force us to question the underlying basis of our societies. He does this by trying to show our society through the eyes of Valentine Michael Smith, a baby who was accidentally marooned on Mars by his parents and raised to adulthood by Martians. Smith is alternatively naive and worldly-wise, powerless and powerful; he possesses strange powers he developed after the Martians taught him how to view the universe the way they do. He also shows us Smith through the eyes of different humans: the reporter Ben Caxton, the nurse Gillian (Jill) and Jubal Harshaw, a famous author who is also a physician and a lawyer (and, to some extent, the kind of person Heinlein wanted to be.) 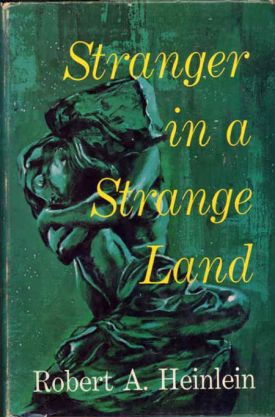 The story starts when Smith is ‘rescued’ from Mars by the second expedition and taken back to Earth. For various legal reasons, he has a good claim to the combined wealth of all four members of the first expedition and ownership of the planet Mars. (Quite how this squares with extant Martians is not explained, although Heinlein would be well aware that prior possession was not nine-tenths of the law.) The government has therefore put him in confinement until the matter can be sorted out. Jill, one of his caretakers, tells Ben … who suggests breaking Smith out and taking him to Harshaw (apparently, Harshaw is too old and too cankerous for the government to touch.) Much legal shenanigans follow, until Harshaw manages to work out a solution that allows Smith to remain untouched.

At that point, the story turns into a road trip of sorts, as we view America through Smith’s eyes. This is a tricky experience for everyone, not least because Smith is extremely powerful, dangerously unpredictable and has plenty of enemies. (He sees nothing wrong with cannibalism, for example.) Eventually, Smith founds his own religion and starts teaching Martian ways to his followers; this includes, among other things, group marriages and lots of sex. This also includes Martian powers, making the religion unquestionable. And then Smith is killed by a mob, rising to the afterlife and leaving his followers to take on the burden of distributing his teachings. 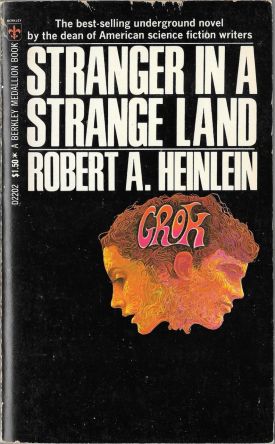 I have always found Stranger in a Strange Land to be more than a little annoying, although it does have its moments. The wrangling over who owns Smith – if anyone owns Smith – has its amusing side, even though I doubt that any citizen is prominent enough to stand up to the government when there is so much at stake. (There’s also the much simpler option of dismissing Smith’s claim to Mars, on the grounds the planet was inhabited before the humans arrived.) But after that, the book gets more than a little preachy … which is underlined by the superpowers Smith (and his followers) possess. Heinlein is quite right to hold a mirror up to the hypocrisies practiced by organised religion, but Smith’s powers take away the element of faith. Smith believes in the afterlife, for example, because he knows it exists. He has all the certainty of a man who has actually met God.

More seriously, Smith is also extremely powerful – and this removes any real challenge from the story. He can sense a ‘wrongness’ about bombs sent through the mail, for example; he can deflect bullets or simply make shooters vanish. Realistically, this – combined with his complete lack of cultural awareness – makes him a danger to everyone he meets. It’s hard to blame the government for wanting him locked up. We have enough trouble with mere humans who refuse to understand that certain kinds of behaviour are unacceptable.

The characters themselves flitter in and out of the storyline. Ben is an intrepid reporter who plays his role, then vanishes for a time; Jill, his supposed girlfriend, moves to Smith as soon as she can. Jill develops over the story, a point I suspect most people don’t appreciate. She starts out as a somewhat prudish girl, alternatively dismissing the concept of using contraceptives and stating that nine out of ten rapes are the woman’s fault (which wouldn’t have been an uncommon attitude in 1961). And then she evolves over the course of the novel, forgoing sexual guilt and entering an open marriage with the remainder of Smith’s followers. (It’s also worth nothing that Smith’s mother apparently invented a new space drive, a subtle blow for female equality in an era that wasn’t sure what to make of the prospect.) 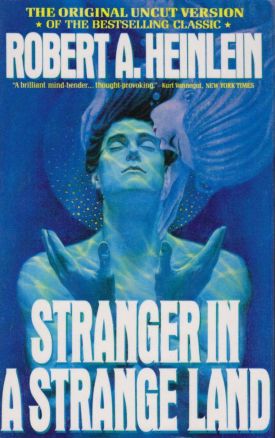 Harshaw is just as annoying, although he makes up for it by being brilliant. I think he was certainly how Heinlein would have wanted to be seen, even if he wasn’t a deliberate self-insert. He’s old enough to understand certain realities that neither Smith nor his friends grasp, yet intelligent enough to experiment with new things rather than grow more conservative in his old age. (He also has a trio of female secretaries, one of whom deflowers Smith at some point.) And yet, he’s also regarded as the sole human capable of embracing the Martian teachings without much (additional) effort. It’s irritating.

In some ways, the sexual aspects are the most questionable aspects of the story. Heinlein was certainly well ahead of his time, when it came to considering roles for women beyond the home. But he also sees women as very much like men, sexually speaking; his reasoning, as put forward in this novel, is that women will be as sexually active (and promiscuous) as men, once they have been freed of society’s chains. And while, in his era, young women were often more tightly controlled than men, I do not feel that this was particularly reasonable even back then. There will be women (and men) who don’t want to sleep with anyone who passes by, plus people in group marriages who are not liked or loved by the others.

Smith also doesn’t think much of homosexuals, regarding them with pity rather than dislike or loathing. This was not, I think, Heinlein’s view – or at least the one he held before his death – but it does overshadow the book. Heinlein does not attempt to justify it – perhaps by making it Smith’s personal preference or a reflection of his upbringing on Mars – and so it has been held against the book. It has also been held against Heinlein.

There are a lot of nice moments in the book. Heinlein – like in Starship Troopers – paints a society that is unselfconsciously diverse. There are, for example, Muslim characters who are neither fanatics nor primitives. Nor does Smith engage in much judging. And Heinlein offers all kinds of glimpses of the future, ranging from the realistic to the laughable. He did better than most, I think, and that should be remembered.

And yet, on the whole, Stranger in a Strange Land simply doesn’t work for me.

Part of the problem, I feel, is that Stranger in a Strange Land is not particularly realistic. On one hand, it deals with the supernatural; on the other, the main characters don’t think or act like humans. (Ben’s dismay at discovering that Jill has been sleeping with Smith is perhaps the most realistic part of the book.) But, on a more fundamental level, the blunt truth is that Smith’s teachings just don’t work. No matter how much easy sex you have, you do not get superpowers. Anyone who attempts to practice Smith’s teachings will probably get into very real trouble, either with the law or (more likely) biological reality. 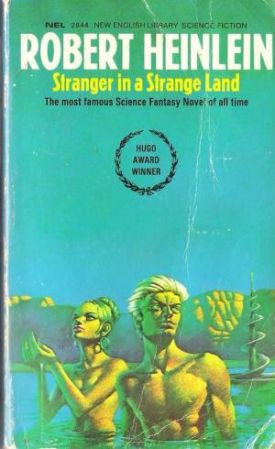 I am not the sort of person to pass judgement on anything that happens between consenting adults in private. But I am also not the kind of person who blithely ignores people suffering because of their own stupidity. If you’re a man and you have unprotected sex with a girl, there is a reasonable chance you’ll be a father in nine months; if you’re a woman who does likewise, you’re going to be a mother. (Heinlein was more aware of the dangers of accidental pregnancies in his later works, most notably To Sail Beyond the Sunset.) And yes, there is a chance of catching something nasty – AIDS was discovered in 1981, but plenty of other STDs have plagued humanity for years – unless you take precautions. Free love gave way to the fear of AIDS, at least in part because people were unwilling to take the time to comprehend the very real reasons underlying tradition. As Chesteron put it:

“In the matter of reforming things, as distinct from deforming them, there is one plain and simple principle; a principle which will probably be called a paradox. There exists in such a case a certain institution or law; let us say, for the sake of simplicity, a fence or gate erected across a road. The more modern type of reformer goes gaily up to it and says, “I don’t see the use of this; let us clear it away.” To which the more intelligent type of reformer will do well to answer: “If you don’t see the use of it, I certainly won’t let you clear it away. Go away and think. Then, when you can come back and tell me that you do see the use of it, I may allow you to destroy it.”

Heinlein’s characters, on one hand, destroy gates with abandon. And, on the other hand, their superpowers protect them from any adverse consequences.

But yes, it is also worth a read.

Mars! Huh! What is it good for? (Absolutely nothing!) Steve reviews two old movies and offers a caution for Aries-ophiles.

Weiss takes on the Kabbala.