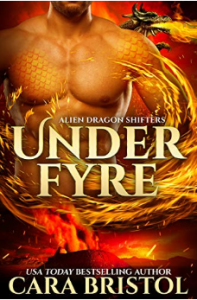 Time to stock up on new science fiction romance to read over the long holiday weekend if you’re in the USA! (And to read anytime, anywhere else of course…)

USA Today Best Selling Author Cara Bristol has turned her attention to alien dragon shifters (a hot trope in SFR) and Under Fyre, book one in a new series. The story: Betrayed by her people, does she dare trust a dragon?

The alien dragon shapeshifters who discover Earth come in peace—at first. Then, inexplicably, they threaten to attack. In an attempt to show goodwill and appease the dragons, Earth sends a human woman to become a concubine to one of the Draconian king’s sons, Prince K’ev.

K’ev would sooner give up his ability to breathe fire than accept a human, but when he meets Rhianna, sparks fly, and his dragon realizes she’s his mate.

Rhianna falls for the hot-blooded prince, unaware she’s a key link in a desperate scheme to defeat the dragons, a strike that could backfire with devastating consequences. Will she figure out what Earth has planned in time to save her dragon mate? And if she does, will K’ev be able to save her planet from an angry king’s retaliation? M. D. 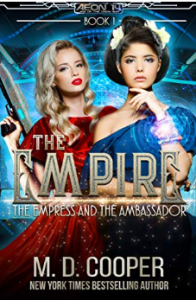 M. D. Cooper spins a space opera tale with romance in The Empress and the Ambassador (Aeon 14: The Empire Book 1). Here’s the plot: The proud empress whose empire is threatened. The spy operating in her court.

Together they must forge an alliance and rekindle a love that deceit destroyed.

Yesterday, Empress Diana discovered that Scipio is not the most powerful Empire in human space. Vast alliances have been created in the far reaches of space, and they are embroiled in a deadly war. The victor will claim all of humanity as their prize.

For decades, Petra has operated as a spy in Diana’s court, getting close to the empress so that she can influence her to ally with the Transcend on the day the truth is revealed. But after joining the empress in her bed, Petra found herself giving more of her heart to Diana than even she realized.

Today, Scipio has allied with the Transcend and joined the war against Orion. With a sad heart, Petra thought her mission in Scipio was complete, but it turns out the real work has just begun.

Many in the Scipian Empire see this as the perfect time to strike out and take down Diana. She and Petra must fend off cunning politicians, assassination attempts, and ready their military to join in the Orion War—all while figuring out how to fall back in love following Petra’s lies and secrecy.

Even though the pressure fuels their passion, it’s not enough to rebuild a relationship. Somehow Diana and Petra must fix what is broken between them and find the strength in one another to save both the empire—and themselves. 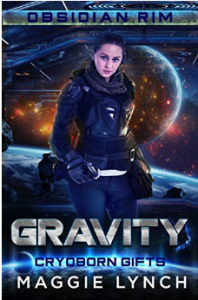 A group of SFR authors has come together to write a connected series in the shared universe of Obsidian Rim. The first title in the series is Gravity (Cryoborn Gifts) by Maggie Lynch and here’s the blurb: Help no one. Show no mercy. Stay alive.

Lehana Saar learned the smuggler’s trade the hard way–as an indentured servant to the Rim’s most notorious pirate. With the skills she acquired and now with her own ship, the star freighter Phoenix, Lehana is known throughout the Rim as a trafficker who will take any job, however dangerous, for the promise of a good profit. But when she’s forced to crash land near a mining colony owned by the heinous, galactic cartel QueCorp, she’ll need all her cunning and experience just to survive. And maybe, with a little luck, she might even turn a profit by forging a deal with the mine’s owners. That is if she can turn a blind eye to the dismal conditions and merciless exploitation of the thousands of QueCorp’s slave laborers.

Forty-five years ago Kash Trider and his wife crashed on Ydro-Down. Captured by QueCorp, they were forced into the mines with no chance of release. Qubition ore killed Kash’s wife and now only two things keep him going: his hatred of QueCorp and the hope of freeing his two children from the same fate. When the Phoenix crashes near the mine, Kash risks everything to get his children on that ship. But will the hard-edged captain help him escape or will she turn him in for the five million DIC price on the head of a fugitive QueCorp slave? 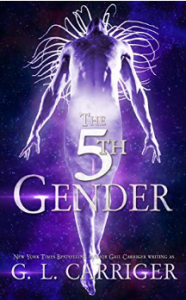 New York Times and USA Today Best Selling Author Gail Carriger has written a science fiction romance with mystery in The Fifth Gender: A Tinkered Stars Mystery and here’s the plot synopsis: A species that has no word for murder, has a murderer aboard their spaceship. ALIEN – Tristol lives in exile. But he’s built a life for himself aboard a human space station. He’s even begun to understand the complex nuances of human courting rituals.

Detective Hastion is finally flirting back!

MURDER  – Except that Tristol’s beloved space station is unexpectedly contacted by the galoi – a xenophobic species with five genders, purple skin, and serious attitude. They need the help of a human detective because there’s a murderer aboard their spaceship. Murder is so rare, the galoi don’t even have a word for it.

ROMANCE  – Which means that he and Detective Hastion are on the case… together. 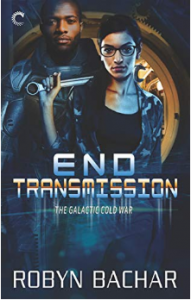 End Transmission is the third book in Robyn Bacher’s Galactic Cold War series and here’s the story:  Maria Watson defied her family to join the Mombasa as Chief Engineer, finding her place among a ragtag fleet of pirates and privateers. Their latest mission left her with a price on her head and a scar on her heart. When a surprise attack separates her from her ship, stranding her in hostile space with a stolen Soviet weapon, she’ll do whatever it takes to uncover that weapon’s secrets—even sacrifice herself.

Broken by the war, Combat Medic Tomas Nyota spent years drowning his sorrows in the bottom of a bottle. Sober, he found a new purpose as the Mombasa’s Chief Medical Officer. His job is to keep the crew alive, even the brilliant but contrary Chief Engineer with whom he’s constantly at odds.

Trapped together in a stolen ship, running from both the Alliance and the Soviets, they must work together to survive. But when the weapon’s horrific purpose is uncovered, their quest becomes a race against time. They must expose the truth and destroy the weapon—before it’s too late. 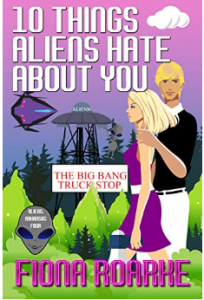 I feel I must mention 10 Things Aliens Hate About You (Alienn, Arkansas Book 4) BY Fiona Roarke because it’s a contemporary romantic comedy in the SFR genre, which is a bit uncommon and I like to present a wide variety of offerings in these posts. Here’s the blurb: Valvoline Ethyl Grey, the youngest sibling and only daughter in the Grey clan, knows the rules when it comes to Alpha-human relationships—it’s fine to have a little fun, just don’t get too attached, unless you want a one-way ticket back to a homeworld that’s never been home.

Skeeter Bite Sheriff Wyatt Campbell is as easygoing as they come, but even he has his limits. At first he thought Vee wanted to keep their romance under wraps to protect him from a butt-kicking from one—or all—of her six brawny older brothers. Since they seem to like him well enough, that can hardly be the case. Now he just has to convince his commitment-shy girlfriend to take a chance. She already has his heart. Why not his ring?

A woman raised among oblivious humans in a super-secret alien colony in Alienn, Arkansas should know better than to have a super-secret love affair with a human, let alone a sheriff. But strong-willed Valene is all too weak when it comes to a certain tall, blond and utterly scrumptious lawman.

Although he comes to her family’s aid when they need him most and vows to keep the secret from other humans that aliens live among them, Valene is determined to sacrifice her love for Wyatt’s greater good.

Wyatt has other plans. 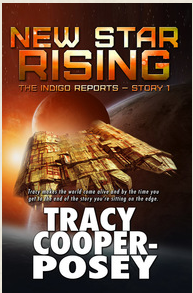 Not romance but many of us are fans of Tracy Cooper-Posey’s no matter what genre she’s writing in. (And I personally do enjoy military science fiction immensely.) You’ll have to hurry though since this bundle is only available until May 30th. Here’s an excerpt from the StoryBundle site: “Bestselling author Kevin J. Anderson has curated a gigantic new Military SF StoryBundle, TARGETS LOCKED, with a dozen action-packed titles, all for immediate download into your e-reader, and you name your own price. This bundle includes THREE boxed sets and one omnibus, for a total of 25 big tales to enjoy.”

Here’s the blurb for Tracy’s book in the bundle, New Star Rising, released in 2017, so not a new release by any means but an item of interest this week:

Bellona Cardenas Scordina de Deluca, daughter of the primary Cardenas family, went missing ten years ago. Reynard Cardenas, Bellona’s father and head of the family, receives anonymous, unsubstantiated news that she has been found. He sends the most disposable person in the family to investigate—Sang, the family android.

Sang’s investigation trips off chain reactions which shift the generations-old luke-warm war between Erium and Karassia into a galaxy-wide conflagration which will engulf the known worlds, including the neutral, fiercely independent free states…unless a hero can be found who will fight to hold the line against the two colossal forces. 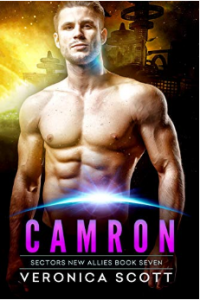 And last but not least, I have a new release in my Badari Warriors series about genetically engineered soldiers of the far future battling alien scientists. Here’s the blurb for Camron:  Dr. Gemma Madarian is far from her home in the human Sectors, kidnapped along with hundreds of other humans to be used for horrifying experiments conducted on a remote planet by alien scientists.

She and another prisoner, Camron of the Badari, are the only survivors of a deadly crash landing. She’s paired up with the genetically engineered soldier by their mutual enemies and sent fleeing through rough country, hunted for pleasure by an enemy officer and his ferocious trackers.

The enemy wants a triumphant kill. Gemma and Camron want to survive.

Camron never dreamt of having a mate but Gemma shatters his preconceptions and makes him desperate to do everything in his power to save her life and claim her for his.

There’s no help or refuge to be had in the desert where they’re fleeing for their lives.

Will Camron and Gemma live to fight another day and explore the growing attraction between them, or will ancient secrets and bitter rivalries end their bid for freedom?

See you in June with more books for the To Be Read List!

Do all children who survive an apocalypse have to become creepy kids?