Veronica interviews Corie Weaver, editor of the Young Explorers’ Adventure Guide series of books, then asks some science fiction romance writers what the first science fiction books they read were.

We’re going to step away from romance for this week’s post and talk about the love of science fiction in general and how young readers come to the genre. I recently became aware of a Kickstarter campaign for the 2018 Young Explorers’ Adventure Guide, which is the fourth annual installment of an anthology project designed to help middle graders and teens discover and fall in love with the favorite genre of everybody here. As Kirkus Reviews said of the 2017 volume: “This collection of short science fiction is an ideal entrée to the genre for neophytes, as it’s not laden with heavy doses of technological jargon or larded with dystopian violence. Offering just the right amount of imagination, humor, and contemporary nuances to engage young readers, this is a must-have in science-fiction collections serving middle graders and teens.” ~ Kirkus Review of Books, for the 2017 Young Explorer’s Adventure Guide.

Corie Weaver, a friend in the author world, is one of the founders of this effort and I asked her a few questions about the project.

Veronica: What motivated you to start this effort 5 years ago?

Corie: My best friend was looking for new books for her young daughter. The qualifications seemed simple: Science fiction or fantasy, female protagonist, no romance.

It was harder to find titles than I thought it would be.  Sure, there were options – Wrinkle in Time, Zita the Space Girl, The City of Ember… But not as many as I’d assumed.

Turns out, according to a 2011 study of 6,000 children’s books, only 31 percent had central female characters, and even fewer featured main characters of color.*

I love science fiction. I believe it can bring us to a brighter future. So, I did the only logical thing, and put out a call for submissions for an anthology of science fiction shorts for middle grade readers, with a focus on diversity and representation. Girls, boys, robots – everyone is welcome here.

* “Gender in Twentieth-Century Children’s Books: Patterns of Disparity in Titles and Central Characters.” (http://gas.sagepub.com/content/25/2/197.full.pdf+html) The results of the study are also discussed in this Guardian article: (http://www.theguardian.com/books/2011/may/06/gender-imbalance-children-s-literature)

Veronica: What have been your major challenges on the Young Adventurers Guides to date?

Corie: I spent almost 10 years in a small non-fiction publishing house in the ’90s; Sean has a background in newspapers and magazines and we thought we knew what the challenges would be. The ability to work from home, with dogs and cats strewn everywhere, sorting out contracts and layout, has been a unique challenge. More importantly, establishing our reputation for a solid anthology so that authors are comfortable trusting us with their work has taken time – and has been entirely worth it!

Veronica: Any “success stories from young readers” to share, as far as feedback from the target audience?

Corie: These are my favorite stories from kids and their parents:

“There are not very many action, adventure, superhero, or sci-fi stories that feature girls, but there needs to be. I have read this whole book and now I have become even more interested in space and robots and things like that.” ~ Lily F. (10 years old)

“I backed the book for my 6-year-old daughter. I had to pry it out of her hands to get her to go to bed. She has declared it her favorite book.” ~ Gary D.

“My daughter is on the couch presently, reading her copy, which I handed to her approximately 3 minutes ago. She is engrossed. Thank you.” ~ Matthew M.

“While I was funding you last night, my 8-yr old daughter came by and asked what I was doing. When I explained that I was funding the second volume of this, she said that she liked the first volume so much that she wanted to give you $5 of her own money, so she went and got her bank, and I upped my donation by $5. :-)” ~ Warren B.

Veronica: How do you recruit the authors?

Corie: When we were first planning the anthology, I reached out to Nancy Kress, whose novella Beggars in Spain has stuck with me since it first appeared in Asimov’s.  She said she’d consider it, then sent me a great story, and has sold us a new one for each collection. The rest of the anthology is filled by open submission. We have taken stories from authors at all stages of their careers, and the one common factor is they believe in the mission of the anthology.

Veronica: What do you look for in the stories? Is there a central theme each year?

Corie: During the reading period, we’re really looking for the stand out stories, the ones that just knock our socks off. Later, we’ll realize that we have a number of stories exploring the theme of family, or leaving home, or facing fears – but the stories come well before the theme.

Veronica: Once the book is published, where will it be available?

Corie: After the Kickstarter, we’ll send ARCs and sell sheets to all the major reviewers, and then libraries and bookstores can order from Amazon, Ingram or direct from us. I’m possibly weirdly old fashioned, but I really think younger kids should be reading from paper – although anything that gets them reading works for me!

Veronica: And if an author is interested in participating in next year’s anthology?

Corie: The submission form will be up at DreamingRobotPress.com, starting July 1.

Veronica: Please tell us a little of your background as an author. 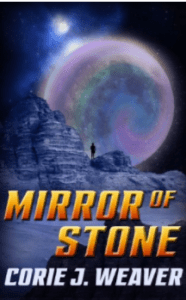 Corie: I grew up primarily a reader, and didn’t think of writing until late in my thirties. My first two novels were middle grade fantasy, but instead of the more usual British/Celtic setting, I explored the mythology of the Southwest. My most recent book is Mirror of Stone, a YA space opera. It’s a standalone, but I’ve spent so much time in that world and with those characters that it’s hard not to think of possible additional storylines.

Veronica: What was the first science fiction book you read? And where did you receive or acquire it?

Corie: I believe it was A Wrinkle in Time, quickly followed by every Andre Norton title I could get my hands on. I was lucky to have parents who were readers; even if science fiction wasn’t their interest, they were happy to take me to the library often. Librarians always seemed to have just the right new book to keep me going!

For more information on this Kickstarter campaign, which runs until July 12, 2017, visit https://www.kickstarter.com/projects/815743020/2018-young-explorers-adventure-guide-sf-anthology

Veronica again: I thought this was such a fascinating subject that I decided to ask a few science fiction romance author friends what their first ‘hard’ science fiction book was and where they obtained it. (To be clear, these authors are not affiliated with the Kickstarter or the Young Explorers’Adventure Guide in any way.) In my own case, my father had shelves and shelves full of classic science fiction and he handed me Andre Norton’s Catseye at a very early age (4th grade maybe?). I’m pretty sure I moved on to Heinlein and Asimov after I’d read all the Nortons!

Red Planet, by Robert Heinlein. I saw the weird illustration on the cover and knew I had to read it. It was in the monthly basket of books that came from the public library. I was in 5th grade. Interestingly, Red Planet was also the first SF novel my husband read. 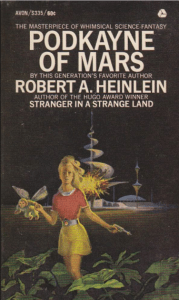 The summer I turned 15, my mother brought home a bag full of juvenile SF books by Robert A. Heinlein. I burned through them like a starving child, and still remember Podkayne of Mars with fondness, because it starred a 15-year-old girl, jut like me (except she lived on Mars, and was much braver).

My first sci-fi book was Brave New World by Aldous Huxley. We read it in “Modern Novel” class in High School. LOVED IT!!

Probably Jules Verne’s 20,000 Leagues Under the Sea. Then everything in the library.

The Chrysalids, by John Wyndham. It was an English assignment in high school, and kick-started my love affair with science fiction.

A teacher at elementary school made me a gift of my first science fiction novel: Children of Morrow by H.M. Hoover, which I read repeatedly for years. It kickstarted a lifelong affair with science fiction. Thanks, Miss McPherson!

When Worlds Collide by Phillip Wylie, from the school library.

I read Andre Norton’s The Star Are Ours over and over again when I was in fifth or sixth grade. Dystopian future with kids. Loved that book!

Corrina Lawson, author of The Curse of The Brimstone Contract:

The Tripods trilogy by John Christopher. I was equally parts horrified and intrigued by the conquering aliens and how kids were ‘capped’ to control their minds. It was a fight against impossible odds and they won. Mostly.

Readers, what was your first ‘hard’ science fiction novel? And where did you find it?

A niche magazine, heading for its final issue.