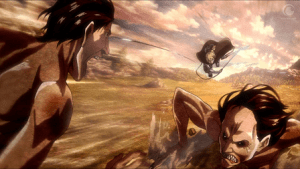 Attack on Titan finale – Yes, there is another week left in the spring season schedule, but that really was the finale of Attack on Titan for now. But the production committee has anticipated that fans who waited almost four entire years for another helping might be a tad dismayed at not even getting a full season, and so the Japanese broadcast of this episode was accompanied by an announcement that season 3 is coming in 2018. Cheer up, you’ll only have to wait… possibly more than a year.

But we did get one heck of a finale. The fight has ramped up to the point where Reiner is turning other Titans into thrown weapons, but then Eren goes one better and discovers he can order the Titans to turn around and attack whoever he wants. And that is the big answer to why Reiner and Bertholdt were willing to risk so much to grab him before running for home. It’s big enough that Ymir suddenly decides she doesn’t need to be present for Historia to be safe. (I hope Ymir didn’t decide to throw her life away by going back to her homeland.)

You don’t read shōnen manga for intense character drama, but that is just what Attack on Titan has delivered this season, served up alongside its trademark action. Unfortunately, with Eren stepping back into the spotlight, you may need to moderate your expectations about season 3. As we were reminded this week, there isn’t much to Eren as a character; without Mikasa to help him manage his feelings and Armin to figure things out, he’s just another angsty teenager biting himself in impotent rage.

But the story should be worth it. As Erwin says, the wall between them and the truth is only starting to fall. There are great mysteries out there beyond the realm of the Titans, and I have every confidence that the next wave of revelations will not disappoint. 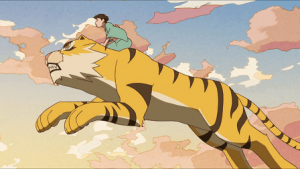 The Eccentric Family 2 #11 – With Temmaya still gloating over his catch at Jurōjin’s place when “Kureichirō” turns up at the elders’ meeting, that means there’s only one person left who could be the false Kureichirō. Sōun Ebisugawa has pulled off a prank for the ages, tricking the entire tanuki community into thinking he was dead. Meanwhile, Yasaburō and Kaisei’s only hope is…Pom Poko Mask, the avenger of helpless tanuki!

Pom Poko is the name of a well-known Studio Ghibli film about tanuki, and also said to be the sound that tanuki make by drumming on their bellies. (Or, in less sanitized versions, their enormous testicles.) So everyone is immediately clear that they’re dealing with Yodogawa, but his flailing around delays the proceedings long enough for real help to arrive.

The “family” in The Eccentric Family is truly asserting itself now, as Yaichirō finally reaches his breaking point and says screw tradition, he’s got a little brother to rescue. And as Gyokuran is right there with him, proving that she has completely bought into being part of this family. 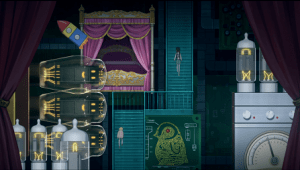 Alice & Zoroku #11 – With the girls still trapped in Wonderland, an expedition sets out to find them. This results in Ichijō being peremptorily dropped down a hole the moment she tries using her powers– Wonderland just doesn’t seem to tolerate the Mirror Gates being used inside it. Wonderland also feels like taking its own sweet time about leading Sanae and Zōroku wherever they’re going, but this gives Sana and Hatori a chance to sit down and talk things out, alienated and traumatized little girl to alienated and traumatized little girl.

Someone from the lab originally described Wonderland as a creation of Sana’s, but it turns out to be the other way around. Wonderland has a kind of intelligence and curiosity, and it created first the Mirror Gates and then Sana to learn more about the universe outside of it. And if it’s sentient, then Zōroku wants to give it a jolly good talking-to about respecting the laws of proper physics. I agree with Sanae, that would be great to watch.

So, did you notice that Sana’s shirt reads “PON POKO KAMEN”? Yes, kamen is Japanese for mask. Yes, pon and pom are alternate transliterations for the same thing. And yes, I believe that stripey bit is supposed to be a tanuki tail. So yeah, her shirt is celebrating the superhero just introduced in this week’s The Eccentric Family 2! What kind of sneaky cross-production shenanigans do we have here?

None, I think. Remember that both shows are adaptations. The Eccentric Family 2 is based on a novel published in 2015, and Alice & Zoroku is based on a monthly manga that began in December of 2012. A typical ratio is 2-3 manga chapters per episode of an anime adaptation, meaning the material on screen in this episode would also date to 2015, and manga author Tetsuya Imai is a fan of the novel. 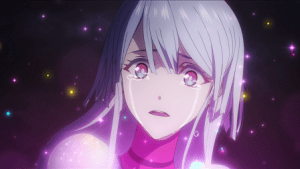 Kado: The Right Answer #10 – The first few minutes of this episode are an unapologetic tour de force of hard sf. It is sequences like that that make me proud as an sf fan to be watching anime. It is light-years beyond the storytelling ambitions of modern Hollywood sf and pretty damn cool to look at besides.

Unfortunately, the rest of this episode was a thing that happened too, so.

The being once known as Wa gave up most of their abilities when they entered this universe due to its limited dimensionality. Having chosen to be Saraka Tsukai for a while, she is now trapped for a lifetime in a story where she can only exist as the fragile girlfriend who supports the hero but absolutely cannot be permitted to outshine him. Rather than exist as a fully formed being, she must be talked down to, put in embarrassing situations, and saved from danger. (Seriously, if all zaShunina’s attack did to a normal human was take a small chunk out of him, Tsukai should have been fine.)

Wa’s story is about embracing the Japanese aesthetic of honoring the impermanence of transient things. It could have done with some embracing of the aesthetic of austere simplicity as well. It is absolutely not necessary to the telling of this story about humans and their negotiation with higher-dimensional aliens, for instance, to make Tsukai assume a suggestive position while putting Shindō back together, or for her to be arbitrarily nude later, or indeed to force these characters into any kind of theoretically romantic subplot when they have displayed exactly zero chemistry or mutual attraction before this point. 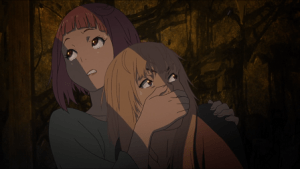 Rage of Bahamut: Virgin Soul #11 – Nina and Joan execute a vague escape plan which is nearly foiled first by Nina forgetting she’s strong enough to rip off her ball and chain (I guess she needed it to make the later fight scene cooler) and then by Joan’s arachnophobia. But since they are still up against the world’s dumbest guards, they muddle their way through until Charioce shows up to hit the reset button. Back to their cells they go, but with no apparent extra security, so I guess we get to watch this all again next week. Sigh.

Meanwhile, El is resto-modded back to angelic form and prepared to wreak unspecified vengeance on humanity. Meanwhile, Rita parachutes into the mine like a goth Mary Poppins and proceeds to pwn the guards like she’s the only competent person for miles around, because she is. I would totally watch the Rita and Rocky Show.

Inviting the Next Generation of Readers to Explore Science Fiction

Two young women explore an alien planet, with the intention of opening a mysterious canister