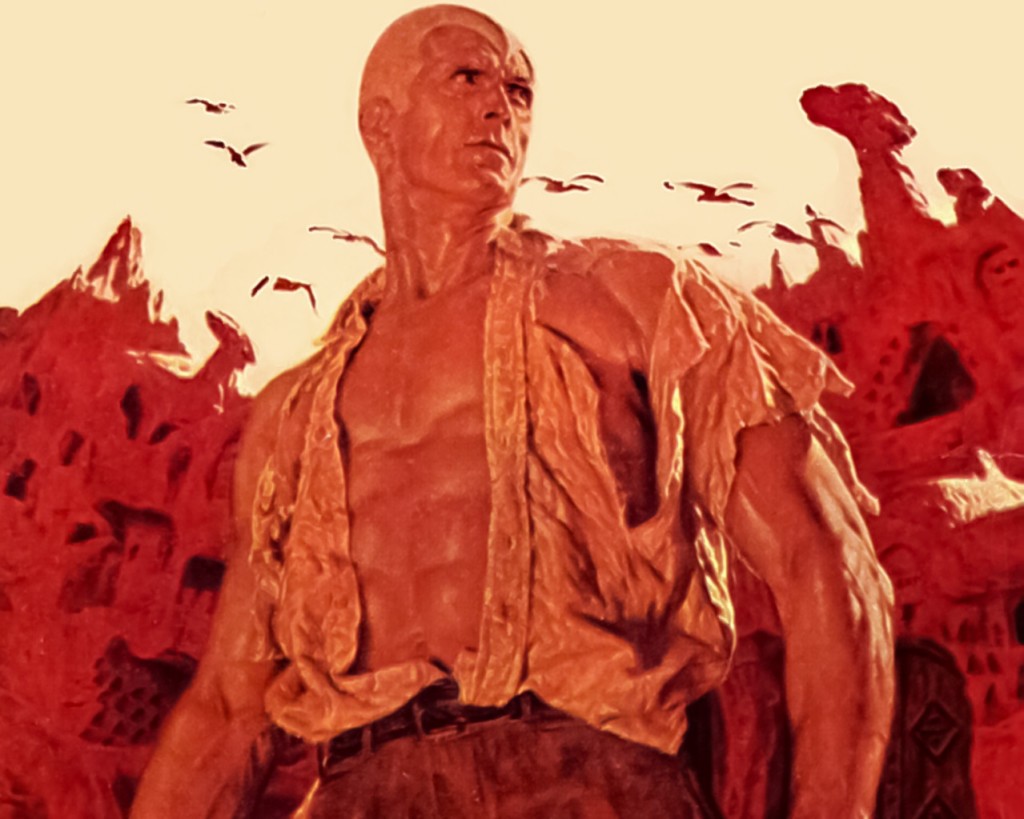 No, I’m not trying to start a movement – some sad puppies type group that laments the days when men were men and women and minorities were silent – no. I just want to talk about manly art. 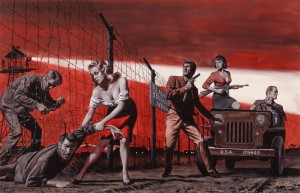 I have had occasion to think about “manly’ art recently as well because of a commission on which I am working. That commission is steeped in manly heroics and in order to make sure the piece has the right feel I have been seeking out and studying other artwork which illustrate the manly ideal.

Walter Baumhofer is one such artist. 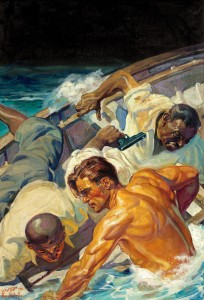 Baumhofer began his career painting covers for pulp magazines. Indeed, his paintings have become some of the most iconic images in pulp art history. He was the first artist to illustrate pulp icon Doc Savage. His cover for the first issue of that character’s magazine is redolent of rugged manliness. The pulps themselves catered to a mostly male audience. Sensitivity was not highly regardedd amongst its readers, yet along with his theatrical flair and mastery of the brush Baumhofer brought a great deal of sensitivity and real emotion into his work. This can be seen more clearly in his later work for upscale magazines such as Collier’s and Esquire. 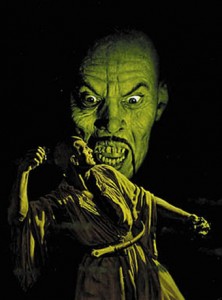 James Bama is another artist whose brushwork is masterful and impeccable and whose subject matter has been, for the most part, manly. Like Baumhofer, Bama started his career in the pulp magazines but after their demise he moved on to producing art for paperback covers. Like Baumhoffer, his most iconic images were illustrations for the Doc Savage paperback re-releases from Bantam Books in the 1960’s, but most of his output from this time had a distinct manly quality to it. And yet, Bama as well is an artist of incredible sensitivity. His more recent portraits of native people have an unusually contemplative quality about them.

And yet, one does not have to be a manly man to produce many art. Some of the most masculine of images have been produced by women artists. Margaret Brundage was a pulp artist who made a career painting cover art for Weird Tales Magazine. Brundage has the honor of being the first artist to render a depiction of Robert E. Howard’s signature creation Conan the Barbarian. You would be hard pressed to find a more appropriate symbol for manly men than Conan the Barbarian. 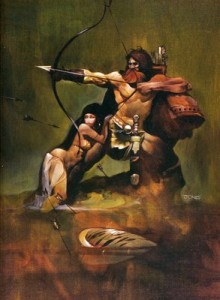 Gender, race, age… none of that really matters much when we are talking about fantasy and science fiction art. There are obvious “manly” artists – Frank Frazetta and his countless imitators, Boris Vallejo, Simon Bisley – and some not-so-obvious ones. Jeff Jones, for instance. Many of his subjects were considered “manly” enough to grace paperback covers of Robert E. Howard’s work in the 1970’s and, indeed, some of Jones’ work is considered to be iconic of the masculine fantasy ideal. Yet Jones himself was not all that he seemed. He transgendered into Catherine Jeffrey Jones. It did not change her art, though. Catherine Jones was every bit as talented and passionate about the same subjects as she had been in her former gender. 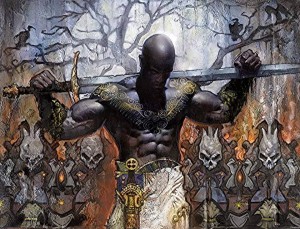 Indeed, gender is immaterial when it comes to painting traditionally masculine subjects. Rowena Morill, Julie Bell, Winona Nelson, Terese Nielson… these are women artists who don’t paint flowers, puppies and children. These women produce images that more than hold their own when it comes to “manly” art. I could also talk about pin-up art (seriously I can… for hours). Pin-up art used to be produced for an almost exclusively male audience. Today women artists are producing some of the best pin-up imagery in the world. So, too, has the audience for that art changed. More and more women are appreciating the form (no pun intended) as well as men.

My point, if I have one, is this; when it comes to “manly” art you can’t always judge the artist by the image. The same applies in reverse. After all, one of the least “manly” artists that most everyone will be familiar with, was Bob Ross, the gentle voiced painter of the “happy little trees”. Years before he became the soft spoken oil painter, Ross was a Master Sergeant in the U.S. Air Force marine. In his own words, Ross was “…the guy who makes you scrub the latrine, the guy who makes you make your bed, the guy who screams at you for being late to work. The job requires you to be a mean, tough person.” On the surface it would seem that there would be no better arbiter of what was “manly” than Bob Ross.

Tell that to the happy little trees.