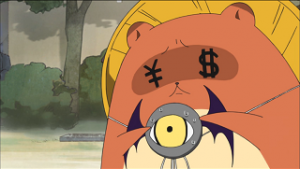 Gugure! Kokkuri-san #6 – Inugami hates everything except Kohina. And coffee, because even canine demons with a drive to slowly destroy all that surrounds them are not immune to caffeine addiction. But everyone loves Kohina. Even Shigaraki, whose pretense at being a bad guy just pretending to be a nice guy is wearing awfully thin this week when he saves her from some kind of cyclops-vampire-eyeball thingy. He’s got his own motives for taking it away at first, but when push comes to shove, he pulls out way more power than the average tanuki should have to set things right.

Kohina is the one showing a dark streak this week, going all Wednesday Addams on him at the end. Shigaraki takes it nearly in stride, maybe because he sympathizes with another misfit, or maybe he’s just fallen under her spell. He put up a good act of caring only for himself when he first arrived, but now he’s making himself cute and furry for her, and willing to follow her orders to walk Inugami.

This show is really settling in now that it’s sorted out where everyone stands in relation to everyone else, and very enjoyably too. 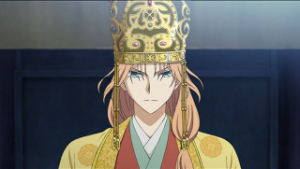 Yona of the Dawn #6 – Cutting one’s hair short shows up again and again in anime and manga as a symbol of transition, a moment of change in one’s life direction, and usually part of a vow of revenge. The sheltered princess is no more; now Yona is an outlaw on a mission to win back her kingdom. Of course, an apparent (and also symbolic) death which will take everyone off her trail for a while helps a lot too.

Soo-won’s coronation provides a good moment to explain the political situation without feeling too infodump-y. There are five clans, with the Sky Clan in charge but the others ready to take over if the opportunity should present itself, and meanwhile Kōka is menaced by three growing powers. This is closely based on Korea’s Three Kingdoms period, where Paekche would be the northern empire, and Silla and Koguryo are the ones to the south. In actual Korea, Silla eventually formed an alliance with China and absorbed everything else, then renamed itself Koryo, from which we get the name Korea.

Whatever Soo-won’s feelings about his uncle, he’s clearly unhappy about the news of Yona and Hak’s deaths. But he seems to have realized long ago that deposing King Il would mean the loss of his friends. Now focusing on bringing the other clans to heel and fending off the other encroaching kingdoms, he feels his purpose is more important than keeping his friends. That purpose seems to be more than just getting back at Il for (allegedly) murdering his father.

Keeping Soo-won sympathetic means Yona of the Dawn has pulled off the difficult feat of providing plenty of conflict with no true villain. Is there real evil lurking somewhere nearby? What’s with the mysterious advisor, anyway? 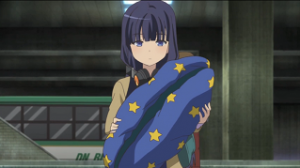 Celestial Method #6 – It’s an episode of little moments this week as almost everyone heads off to the local hot springs for a relaxing weekend. Sōta is stuck at home studying, feeling left out. It’s hinted that he helps out at the Shīhara shop so willingly because he’s sweet on Koharu. Yūzuki has graduated from outright hatred of the flying saucer to being tsundere about it. Nonoka has a wicked punch (or else that was one fragile arcade machine) but knows when to pull it.

And Shione, who has isolated herself from everyone, finds herself reaching out to Noel without really knowing why. She hasn’t just cut herself off from her old friends; she can’t act like a member of a group at all anymore, as the orienteering exercise showed. There’s more here than anger at Nonoka for suddenly moving away, if that even figures into it at all. But Shione doesn’t seem to remember what exactly happened, much as Nonoka had forgotten Noel until moving back to Kiriyako.

What does Shione think Noel is, at this point? We missed out on the conversation at the restuarant last episode, but whatever Noel said has Shione intrigued enough to overlook the fact that Noel is Nonoka’s friend. Did Nonoka perhaps introduce Shione to Noel before leaving? 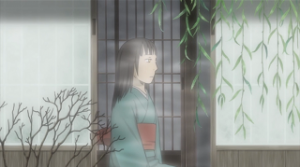 Mushishi #14 – There is an actual city which is Japan’s answer to Venice: Yanagawa, located on a swampy stretch of Kyushu (the southernmost of Japan’s main islands) is honeycombed with canals built to drain the surrounding land to make it suitable for farming. Like the Venetian gondoliers, guides will take tourists on a trip through the city in donko-bune, characteristic flat-bottomed boats like the ones seen here. The setting for this episode is probably not Yanagawa itself, as no specific identifiable real-world location has ever turned up in Mushishi, but the inspiration is clear.

The canals make a fine metaphor for the connections that form between humans. When Yura’s wandering spirit calls out to the villagers, they dream of someone being swept from the canals out to sea, just as Yura is in danger of being pulled away from them forever. And when Yura finally realizes she must give up her telepathic power in order to survive, the canal is her new connection back to her old friend.