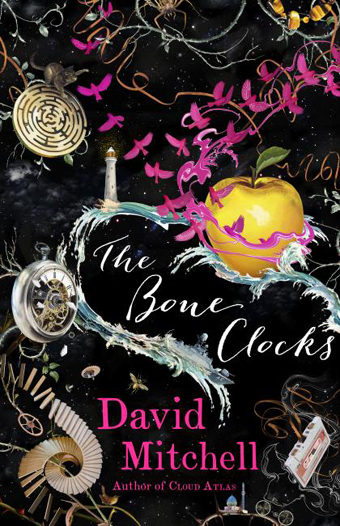 NOTE: THIS REVIEW CONTAINS MAJOR SPOILERS, INCLUDING DETAILS OF EACH SECTION OF THE NOVEL AND SOME DISCUSSION OF THE ENDING. IF YOU WISH TO APPROACH THE BONE CLOCKS WITHOUT PRIOR KNOWLEDGE IT IS BEST TO READ THIS REVIEW AFTER THE NOVEL.

SO IN SHORT – SHOULD YOU READ THE BONE CLOCKS? YES, BUT ONLY IF YOU ARE SUCH An AVID DAVID MITCHELL FAN THAT YOU HAVE READ ALL HIS OTHER BOOKS FIRST. NOT ONLY BECAUSE THE BONE CLOCKS MAKES REPEATED REFERENCES TO HIS EARLIER WORKS, BUT BECAUSE THEY ARE ALL MUCH, MUCH BETTER. END OF SPOILER WARNING.

Two of my favourite novelists, Stephen King and David Mitchell, both enjoy interweaving their works into one vast über text. It is well known that characters, as well as symbols (such as the number 19) recur through many of Stephen King’s works. For instance, the Catholic priest, Father Callahan, who was a major character in King’s second novel, ‘Salem’s Lot, reappeared many years later to play a supporting role in latter part of the Dark Tower series. Less well known is that David (Cloud Atlas) Mitchell has long been up to something similar, with minor characters being referenced or alluded to between his various novels. However, with his latest, sixth novel, The Bone Clocks, Mitchell has taken the practice to a new level, effectively weaving all of his novels into one millennia spanning tapestry – even, for example, retroactively co-opting his previous novel, the entirely non-fantastical historical adventure, The Thousand Autumns of Jacob de Zoet, into the framework of his latest, entirely fantastical new work.

There is another parallel with King. As a form of psychic vampire, the villains of both King’s recent Doctor Sleep and Mitchell’s The Bone Clocks, attain a kind of semi-immortality (with superpowers) by praying on the life essence of others, often children. In a recent interview with The Guardian Mitchell acknowledges this, saying “Maybe it’s not so surprising that we both hit on the same solution to the same problem. The question of how you motivate evil. I wanted a kind of Faustian contract, which would make a kind, sensitive person pause before rejecting it. I mean, sex, money? Just take control of a hedge fund and you can have all that. But rewriting the terms of existence so you don’t have to age? I think most of us would think about it before saying no.”

While Doctor Sleep functions as a sequel to perhaps King’s most famous and acclaimed novel, The Shining, The Bone Clocks serves in part as an (unnecessary) prequel, both in content and structure, to Mitchell’s most famous and acclaimed work, Cloud Atlas. And in both cases, while the respective new books have many worthwhile elements, they fail by any measure to live up to their predecessors.

Cloud Atlas consists of six novellas, moving from the past to the future, from 19th century maritime adventure to post-apocalyptic science fiction. The Bone Clocks consists of six linked novellas chronicling the life of one woman, Holly Sykes, from rebellious teenager in 1984, to grandmother in 2043. Each novella is narrated in the first person present tense, but only the opening and closing sections are see directly through Holly’s eyes. In the other four sections she is a character in someone else’s story. It is a strong framework on which to build a novel. Unfortunately Holly is not herself a particularly interesting person, but rather something of an everywoman. The tension, which the novel is unable to sustain, comes from the events she finds herself caught-up in, resulting in an unworkable mess conflating a realistic contemporary chronicle of modern lives with a centuries spanning sprawl of secret internecine supernatural conflict, mired in clunky exposition and drawing on cliches already worked to extinction everywhere from Doctor Who to The X-Men.  The only points at which Holly seriously takes control of the narrative is in the writing a non-fiction book, which happens ‘off-stage’, and which she later comes to somewhat regret, and in saving herself from the aftermath of a battle to which she is essentially an observer.

So it is that the opening section of the novel is surprisingly flat and dull for a David Mitchell novel. The teenage Holly is all resentful rebellion, running away from home – a pub in Gravesend – to be with her boyfriend, and becoming caught on the periphery of a savage supernatural ‘war’ (there are only a handful of protagonists on each side). And the book could do with better editing: teenagers didn’t punctuate their sentences with the word ‘like’ in 1984 – later we find someone waiting for a text message, circa 1990/91.

The second section, set seven years later, is far more successful. The narrator is the student Hugo Lamb, who appeared in Mitchell’s Black Swan Green. He is a self-serving sociopath who finds himself attracted to Holly in a Swiss ski resort.

Part three is set in 2004. Holly is a young mother. Her partner is a war correspondent based in Iraq. They are with their six year old daughter Aiofe, in Brighton for a wedding. The passages alternate between events surrounding the wedding and tragic events in the war zone, and while the Iraq sequences are compelling they add nothing to the story overall. The real horrors are also cheapened by the hackneyed fantasy horrors of the novel. However, the most gripping part of the entire book comes when Aoife goes missing. The tension of the following sequences builds to an almost unbearable degree and for thirty or so pages Mitchell is on top form.

Part four moves to the latter half of our current decade and  follows dissatisfied novelist Crispin Hershey, a clear, razor-edged, parody of Martin Amis. This part of the novel is rich and vibrant, and sometimes hysterically funny, particularly in Hershey’s run in with a feminist critic. Events take a darker turn and the section comes to a shock close, but what appears to be a major development turns out to be a dead end, making no difference to anything that follows.

It is 2025 – part five is the most divisive section of the novel. A long sequence set in New York in which all the fantasy elements come together and the secret war of immortals comes to a head. Unfortunately it is all done with a thundering lack of finesse. It doesn’t matter much what happens, as it seems anything can, characters we don’t care about displaying a vast range of never really clearly explained superpowers as and when the incredibly convoluted plot requires. It all comes as something of a shock in its awfulness, because although Mitchell has set some of these elements up in advance, in all his previous novels any fantastical aspects have been artfully stitched deep into the fabric of the story almost to the level of subtext. Here it is all about as subtle as Highlander (film or TV series, take your pick). If you want to read this sort of thing done well then turn to the secret conflicts behind everyday reality in such Clive Barker novels as Weaveworld, The Great and Secret Show and Imagica.

Here Mitchell lets loose with all the psychic pyrotechnics of a mega-budget superhero sequel, but with so many powers, so much jargon and terminology, so much of everything that it all becomes tiresomely overbearing. Where the element of an incorporeal being moving from person to person was so elegantly achieved in Ghostwritten most readers didn’t even notice the tissue connecting the various novellas, here it is beaten to death. With a rolling pin. Add to that, we get dialogue such as ‘Crush them like ants!’ Yes. Really. And the italics are in the original.

Finally part six finds Holly as an old lady living in Ireland, all our environmental sins come home to roost; it takes some believing that two hundred jetliners were destroyed in a single ‘gigastorm’ over the pacific a few years before. Particularly given by that point international air travel is supposed to have become prohibitively expensive.

None the less, Mitchell creates a moving sense of things coming to an end, of Western civilization hanging on by a thread, one held by the economic superpower of China. He causes the reader to reflect on how much can change in a single lifetime, a single day, how much we change we have already seen. Are we at peak civilization now? It can all fail so quickly. He evokes a powerful sense of dread, of things falling apart, the centre not holding, but it is all rather deus ex machina. And there is a sense of the writer rapidly repeating himself. Didn’t we get this same, sailing off in a ship never to return ending in his last novel? Except there it was devastatingly moving for being hard-earned and happening to a character, Jacob de Zoet, about whom we cared profoundly. That Holly will be able to keep in electronic contact with her grandchildren in Iceland rather takes the edge of the poignancy of being parted forever. That said, this time the ship is a rescue mission from an advanced civilization (Iceland), and Mitchell seems to be laying the foundations for the high tec Prescients from Cloud Atlas’s post-apocalyptic section.

There is an enormous amount of story in The Bone Clocks. Some of it is fantastic, some of it fantastical. Unfortunately it doesn’t add up to more than the sum of its dark materials. Largely because even while the prose is intermittently wonderful, quotably brilliant, when not falling into clunky info-dumping that is, the fantasy part of the novel is mediocre. The terminology for the supernatural war sections is laughably bad, and there is a plethora of it. There are too many characters and Mitchell doesn’t make us care about them, seeming more interested in the admittedly ingenious task of creating an extraordinarily intricate tapestry of plot points and interlocking details.  But it all adds up to 600 pages of very little, like a vast, bloated Hollywood sequel to a smaller, more intimate and far better original.

No doubt there are many, many connections here to Mitchell’s earlier work which I have missed because it is so long since I have read his other books. Those so inclined will have great fun chronicling all this ingenuity. But a huge jigsaw puzzle does necessarily not a great novel make. In retrospect we may come to see The Thousand Autumns of Jacob de Zoet as the high point of Mitchell’s career, a breathtaking marvel of a book which will stand as a modern classic. The Bone Clocks calls time on our civilization, but on the evidence here David Mitchell’s creative spring is running just as dry.