Home Film/Televison The Speed of Science 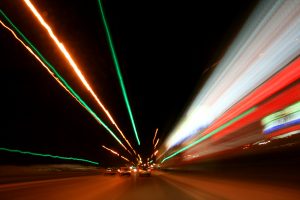 Science deals with a lot of high speed phenomena, like the speed of sound and the speed of light, which can make the topic seem fast and exciting.  We also see science news on tv and the internet, and there always seems like there’s a nifty new gadget to buy.  The truth is that science at the individual level is usually as slow as watching a glacier melt, and science fiction rarely shows it that way.

What we get, often for the sake of wrapping things up in the allotted episode time limit, is some technobabble followed by a scientist or engineer solving a complicated technical problems in mere minutes.  It works the first time, whether or not it’s ever been done before, and doesn’t explode in someone’s face (at least not someone with spoken dialogue in that episode).  Star Trek in all its forms was often a guilty party, but almost any television show or movie with a high-pressure action scene depending on a scientific resolution falls into the trap.

The reality is that scientists spend months or even years between “Eureka” moments, and those revelations often take months or even years to fully develop, check, and write up for publication.  Referees of submitted scientific articles take weeks to review papers, often asking for extensive revisions that take the original authors weeks or months to complete.  Sometimes there’s a second round.  Most of these papers are incremental in their advancements, and often enough don’t have conclusive results.  Or, if they do, they don’t agree with other studies.  It often takes years of work before a particular part of the scientific community starts to reach consensus on even a small problem.

And as for the big problems, well, they often take large teams with large budgets and large facilities.  As the size of projects grow, so does the project management, the meetings, and the reports.  Despite how fast our technological achievements seem to be coming at us, so fast we have the term “future shock,” in many ways the speed of individual projects has slowed down.  They’re too big and require too many areas of expertise that must be brought together.

Science fiction loves the story of the lone inventor in a lab making a great discovery that overnight changes the world.  It was never very common, and it’s less common now.

On the other hand, depending how you count, millions of scientists around the world working on different things and making discoveries.  Science does seem to move fast when taken as an ensemble.  There is more pressure than ever to get coveted faculty and research jobs, and it’s “publish or perish” so there’s a lot of publications to sift through.  We probably need more scientists to create a new category of meta analyst, to keep up on more than their own tiny niche and keep an eye on entire fields rather than subfields.  It’s a hard thing to do and doesn’t pay well.  It also makes for bad stories.  We want to invest individuals with their own personal problems and goals rather than what’s coming out of large groups of scientists.

I mentioned in another post how Gregory Benford’s Timescape there is a nice illustration of a three-dimensional scientist as a real person.  There’s also a nice description of science itself, with months of experiments meticulously tracked in handwritten notebooks.  This is 1970s science, however, with small groups and individuals, and not a lot of computers around.  Now modern science is full of large groups, political fights for money in shrinking budgets, skype meetings, long email chains, computers collecting and analyzing gargantuan amounts of data no human could hope to understand in a lifetime of study without a computer…it’s just getting different.  Bigger.  More complex.

The science fiction movie that gets the pace of science right is 2001: A Space Odyssey.  It’s sometimes glacially slow, and most younger audiences won’t sit through it now that we’re actually in the 21st Century.  The archeology of the monolith on the moon is slow, as is the deliberation about what to do about it, followed by a slow voyage to Jupiter, and a slow, uncertain resolution.  The epitome of the fast science fiction movie today that takes the science cavalierly is Crank 2: High Voltage, a frenetic film so ridiculous it can’t afford for viewers to slow down and think about what’s going on.  It’s a movie that glorifies in its scientific absurdity.

It’s ironic that in a world that seems to be careening into the future at breakneck speed in many ways, the daily reality for me as a scientist is spending months working on individual papers and rarely getting more than a few out in any given year, and those are rarely longer than ten pages each and rarely breakthroughs.  I have some thoughts on how this affects the reality of the so-called “Singularity” I’ll discuss in the future.  In the meantime, like they say how to spot the expert by who says the job will take the most time and money, the most realistic science is whatever looks the slowest and most uncertain.

Anyone have any great examples to share of realistic science portrayed in science fiction?  There are plenty of bad ones, so let’s highlight the good ones!