An interview with the founder of a new genre publishing venture. 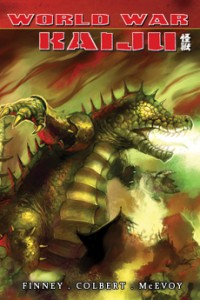 I’d been hearing great things about a new speculative fiction venture, 01 Publishing (initially through their graphic novel Kickstarter project, World War Kaju, which I’ll be reviewing later in the year. 01 Publishing is a global imprint dedicated to the best in speculative fiction. It publishes across a wide variety of formats: physical books, e-books, audio books, and even full-cast audio dramas. Its  mission is to produce original titles intended for an intelligent fan-base who expects  more from their entertainment. We mean to offer readers a clean break froma literary world that has become bloated with TV spin-offs, video game franchises, and movie pitches masquerading as novels.

I caught up with the woman who launched the business, Kat Rocha, to interview her about the venture. After deciding the life of an adventuring archaeologist was just too dangerous, Katapult “Kat” trained for two years at the Watts Atelier of the Arts and then moved to the realm of digital painting. She’s produced work for Interzone Magazine and concept designs for Spartain games. She has also collaborated with writer/artist Josh Finney on such projects as Utopiates, Batman 80pg Giant and Titanium Rain.

John Dodds for Amazing Stories Magazine: In a crowded market, filled with increasing numbers of indie publishers, and big names moving more into digital publishing, what made you decide to set up 01, and what are the elements that set you apart from others?

Kat Rocha: I’ve worked professionally in comics for eight years now and in that time my experience with various publishers has not been a good one. After being kicked around, taken advantage of, and ripped off, I realized if I was going to work this hard, it should be in the service of something I actually believed in. Why not it be a publishing company that printed the kind of books I enjoyed, and one that was based on ethical business practices.

People are hungry for stories that exist outside the endless parade of super heroes and franchise spin-off titles. Unlike most of the industry, our catalog isn’t tailored to draw the eye of Hollywood producers. We print material for readers who love intelligent, engaging stories that challenge and push boundaries. We want quality narratives best suited for the graphic and prose medium, not movie pitches.

ASM: At one point the term speculative fiction was just another name for science fiction (for those who thought SF was a little lowlife). That’s no longer the case, obviously. But where does 01 sit in the spectrum of speculative fiction – in other words, what sort of stuff inspires you most?

KR: So far our catalog has been fairly diverse, but 01Publishing does veer toward the dark and gritty. We have quite a bit of cyberpunk planned for the future, and horror is certainly a constant with everyone involved. Really, the consistant aim for 01Publishing is smart stories with strong narratives. There’s already pop-corn entertainment on the shelves. 01 books should make you think.

ASM: You made a conscious decision not to do TV spin offs, gaming tie-ins and so on. Who would you say your ideal market is and how do you reach them? 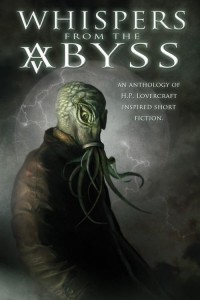 KR: Ideally? Our long term goal in terms of graphic novels is to provide titles that science-fiction and horror readers can enjoy. Sure, TV spinoffs and game tie-ins are an easy way to tap a pre-existing audience, but it’s never going to produce the next Watchmen or Maus. I want 01Publishing to be known for quality of authors producing memorable work that endures. Yes, okay, we did do an H.P. Lovecraft-inspired anthology, but hey, at the end of the day we are still fans and who wouldn’t want the chance to let a hungry pack of authors loose into Lovecraft’s sandbox?

ASM: You were once an adventuring archaeologist, I gather. Has this Lara Croft-ish background helped you be more adventurous when it comes to publishing?

KR: Hahaha!! When I was a kid, I wanted to grow up to be Indiana Jones. I wanted to go to Egypt specifically and dig up lost artifacts and find hidden scrolls. I held this plan of being an Egyptologist till my sophomore year in college where I discovered I could actually create art instead of just find it. Now, you could say, I do both. And though I may not have Indi’s hat, I do have the whip.

ASM: You are a digital artist, and you’ve done game concepts, too, not to mention doing illustrations for Interzone. All of which makes me horribly jealous. Do you use your work in any context in 01Publishing?

KR: Constantly. For 01Publishing, my skills as an artist are tapped whenever I needed to ensure our books were “up to snuff” visually. As Editor-in-Chief it is important to maintain quality. My past experience as a working artist has given me the instinct and ability to talk to artists in their language.

With that said, I have broken out my own artistic talents on a few of our projects. I am the penciler on Josh Finney’s Utopiates, and I participated in the concept designs for some of the monsters in World War Kaiju.

ASM: Tell us about your Kickstarter project, World War Kaju.  I’ve seen some of the advance art, and it looks amazing. What is it and how successful was your kickstarter campaign.

KR: We launched the Kickstarter for World War Kaiju last year in June. The elevator pitch pretty much says it all about the project, which is “What if Doctor Stangelove created Godzilla?” Basically, imagine the Manhattan Project didn’t give birth to the bomb, but hatched a giant monster. Now the world is locked a cold war that’s all about monsters, not missiles. It’s an idea Josh Finney had been pitching to comics publishers for awhile, but everyone thought the idea was either too weird, or had no audience. Well, there certainly is an audience, and they went nuts for World War Kaiju. We asked for $15,000 on Kickstarter, and ended up getting $23,000. Readers can find out more about the title at  the World War Kaju site or at 01 Publishing itself.

Currently, 01Publishing is running a Kickstarter to print our H.P.Lovecraft inspired anthology, Whispers from the Abyss. The book has been available on the Kindle since last October and it’s been on Amazon.com’s top 20 list for horror anthologies multiple times. So far we’ve raised nearly half of our goal in just the first week of the campaign.

ASM: You’re doing audiobooks, too – are they exclusively titles you publish in book format or do you do standalone audiobooks? Do you have your own studios and cast and directors, or are those farmed out? 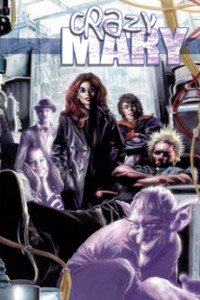 KR: We contracted with the Audio Comics Company to produce a dramatization of Josh Finney’s futuristic war story, Titanium Rain. I must say, they did a fantastic job. The production won the Mark Time award and has been selling really well on Audible.com.

ASM : What is your acquisitions policy? Are you approached by agents, or o you commission? Or both, or something else?

KR: At the moment, 01Publishing is by invitation only, although in the next year or so we hope expand. For now, the only open calls we have are for our anthology series.

ASM: Anything you’d like to tell us about current and forthcoming projects?

KR: World War Kaiju will be available in early August. After that, we’ll be making some big announcements that are just in time for Halloween. Other than that, I cannot say other than there are big plans for 01 in the future.

ASM: Finally, Kat, aside from world domination, what are your immediate and long term ambitions for 01Publishing.

KR: Crush my enemies, see them driven before me, and to hear the lamentation of the women…er something like that.

Dr. Jeremy Stone: Do you believe in time travel? Dr. Angela Noyce: Sure! As much as I believe in Santa Claus and the Easter Bunny. That is just to say that I love the idea but I’m dubious about the reality. But I love the idea, I’m all for it! For some like me who […]

The Most Misunderstood Theories in Physics – Explained