Home Fantasy Even SF is Fantastical!

Rod Serling once claimed that Science Fiction is “the improbable made possible” while Fantasy is “the impossible made probable”.  An interesting and thought provoking definition that distinguishes the two genres and which could take us through a portal of thought provoking exploration. As we take that journey of dissecting each and every novel, or screenplay, we will most likely find few true hard core science fiction stories available. I like the idea of adding fantasy to SF. Why? Because it takes science a step farther up the rung of the imaginative ladder. Should an author write total hard core SF their stories could very well border non-fiction and where is the excitement in that? (Note: opinions are this author’s only.)

When reviewers began to categorized my series as SF/Fantasy I was taken aback, having assumed that the stories I wrote should be classified as fantasy. But because the main character accesses the magical Realm through a computer, readers saw it falling in the SF/Fantasy genre. And when someone told me the story was a cross between Tron and Narnia I had to laugh. A compliment nonetheless, the thought never occurred to me that I had written anything resembling SF. Whereas science mesmerizes me, I am mostly lost in the mechanics of it. 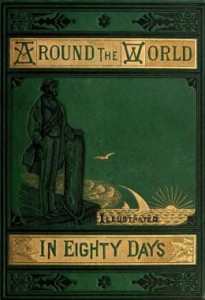 One of my favorite authors while growing up was Jules Verne. He had such a remarkable way of humanizing science fiction. Perhaps because his science wasn’t wholly about space ships and wars in distant galaxies, which I had no real interest in, his books brought the reality of science back to earth.

On the opposite pole we have Star Wars. Ask the passer-by on the street what genre Star Wars is and I will bet he or she will reply with the answer science fiction. That’s mostly true although I’ve heard it said Star Wars is a space opera. No matter, Star Wars also has it’s fantasy elements. The Force is by no means science, though instead of fantasy it borders on religious. And some of the characters in the later sequels definitely were fantasy characters.

Orwell’s Nineteen Eight-Four and Bradbury’s Farenheit 451, though considered SF in a dystopia subgenre, have heavy underlying political elements that meander so far from science that they border fantasy. There are many sub genres under SF and a discussion on classification can actually become somewhat boring.

The point I’m trying to make is that a good SF can and should be a product of imagination rather than based completely on proven facts. Why? Because I hold to the belief that science itself is a by-product of man’s imagination.

For instance, if Benjamin Franklin didn’t imagine that electricity was fluid and that it could be channeled away from homes to keep people safe, than he wouldn’t have invented the lightning rod. It took thinking outside the box for Issac Newton to question the fall of an apple. All science stems from imagination and the idea of exploring what one imagines. From those premises, which were arrived at by imaginative thinking, concepts can be materialized.

We all know that Leodardo de Vinci invented some amazing technology well before his time. De Vinci died in 1519 but he drew sketches of the parachute a 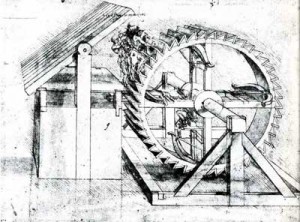 nd the helicopter among a hosts of other inventions. He had a vivid imagination. At the time that he lived I wonder how ‘probable’ his inventions were?

Did people consider his invention of, say for instance, the machine gun reality? ( see de Vinci’s drawing on our right)? In his time would this have been a weapon of science or of fantasy?

Of course today mankind can make these assumptions much more quickly because science has advanced ten- fold since the 16th century. Still, if an author has a highly imaginative mind, and they dream up something really bizarre like a time machine, whose to say it’s fantasy? Wouldn’t de Vinci’s peers had laughed at him when in 1480, he showed sketches of the helicopter he designed? Especially since an operable man-ridden vertical flying machine didn’t appear on the scene until 1906?

And when you have a technology that seems really crazy, like Star Trek’s see-through aluminium that can ward off bullets do you think that’s one of the fantastical elements to this Science Fiction story? Or did you know that the US Air Force was going to actually produce transparent aluminum armor or aluminum oxynitride (ALON) in the very near future?

So if in my fantasy story my main character picks up a cell phone and is transported to another dimension in a different era, maybe today you’ll laugh. However, maybe in another 100 years your great grandchildren are going to shake their heads and say, “Geez grandma, that’s old news!”