The Kennedy assassination is an alternate history constant. 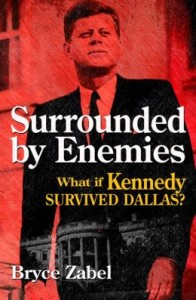 For the next installment in my coverage of the 2013 Sidewise Award nominees, I have read Surrounded by Enemies: What if Kennedy Survived Dallas? by Bryce Zabel. As you can probably guess from the title, this novel is an alternate history where Kennedy survived his assassination. Zabel, however, takes this common point of divergence and gives it an intriguing twist that I think will delight many readers, but turn off some hardcore alternate historians.

Surrounded by Enemies is written in a style of a commemorative retrospective of the turbulent Kennedy years from the perspective of journalists working for the fictitious magazine Top Story. In this alternate history, Kennedy survives his assassination after a quick thinking Secret Service agent dives on the President and his wife after seeing suspicious movement from the infamous Dallas book depository. His life saved, Kennedy returns to Washington convinced there is a larger conspiracy at work instead of this just being the actions of a lone gunman. With the help of his brother, Attorney General Robert Kennedy, JFK seeks to out the conspirators while campaigning for reelection. The conspirators, however, are not through with him yet and decide to assassinate him a different way by leaking Kennedy’s multiple affairs and health problems to the public.

Surrounded by Enemies is a surprisingly good read (and I will explain why it is “surprising” in a little bit). The “fictional book” narrative style is one I enjoy and reminded me of the alternate political history books of Jeff Greenfield (Then Everything Changed, 43* and If Kennedy Lived). Although on the short side, it was still a tightly written political thriller with recognizable faces from the 1960s standing in for the usual characters found in that genre. I found myself engaged in the story and had trouble putting it down to do other things.

That all being said, I was a little uncomfortable about Zabel’s use of the conspiracy theories surrounding the Kennedy assassination. In Surrounded by Enemies there is no doubt about there being a sinister conspiracy involving different groups to murder the popular, but controversial, president. Now there is nothing wrong with historical revisionism. Historians who question the mainstream version of history have helped bring to the light the reasons and motivations behind historical events that would otherwise be covered up by propaganda and nationalism. Nevertheless, there can be a negative side to historical revisionism.

Much like science, history has its own process that requires evidence and peer review before something can graduate from belief or opinion into fact. Conspiracy theories, however, don’t follow that process. They rely heavily on guess work, give too much credit to coincidences and shrug of gaps in their evidence by pointing at government cover-ups. The fact that there have been conspiracies uncovered (i.e. Watergate) doesn’t immediately give credence to the numerous and contradictory theories (according to Vincent Bugliosi “42 groups, 82 assassins and 214 people” have been accused of killing the president) surrounding the Kennedy assassination.

Still I am not here to argue about who killed Kennedy (although considering 59% of Americans believe there was a conspiracy, it is odd to think I am a non-conformist by believing Oswald acted alone) I am here to talk about Surrounded by Enemies. Although a part of me thinks the book could have been stronger by portraying a Kennedy administration collapsing as the president becomes more paranoid over a perceived conspiracy to destroy him, it still was an entertaining novel and a strong contender for the 2013 Sidewise Award. While some may be put off by the conspiracy theories, many will enjoy this well done political thriller staring one of America’s most controversial presidents.

Handmaid’s Tale to Get a Sequel