There has been a lot of discussion about reading your age. Personally I find that to be complete bullshit. If a story is good, then it shouldn’t matter what age you are to enjoy it. It is the reason Toy Story 3 was nominated for an Oscar and why The Lego Movie was not only a commercial success, but a hit with the critics as well. Taking it back to books, how many adults have read Harry Potter and The Hunger Games? How many of those adults find the lessons in those books more powerful then anything they will learn from religion, politicians or philosophers? So with that mind lets take a look at The League of Seven by Alan Gratz.

In case you didn’t guess from my introduction above, The League of Seven is not meant for adults or even young adults. Its a “middle-grade fiction” set in an alternate 1870s North America. The main protagonist is Archie Dent whose parents work for the Septemberist Society, a secret society dedicated to combating the Mangleborn, giant monsters who will be awakened whenever humans harness the power of electricity, but will always be fought by a team of seven heroes who will arise to defend humanity. When Archie’s parents and the entire society are compromised by one of Mangleborn’s spawn, Archie has to save his parents with the help of his robot butler, a First Nations warrior-girl armed with a flying clockwork circus and Scottish boy from Carolina who can absorb electricity.

Despite not being in the demographic, I found The League of Seven to be an engaging adventure story that reminded strongly of Animorphs, another story about youths who have to band together to fight a greater foe. The setting was also ingenious combination of alternate history and steampunk. Following an unknown catastrophe that cuts off contact with the Old World in the 1770s, the Thirteen Colonies join the Iroquois Confederacy as the “Yankee” tribe, providing the framework for what would become the United Nations of America. This country, which controls most of what would be the Eastern United States, has a large populations of Native Americans that were not driven westward and are equal to the former European colonists. Considering how Native Americans are overlooked in alternate history (and history in general to be honest), its refreshing to see an author make them more than just cliche characters.

And I really love a book with an interesting map! 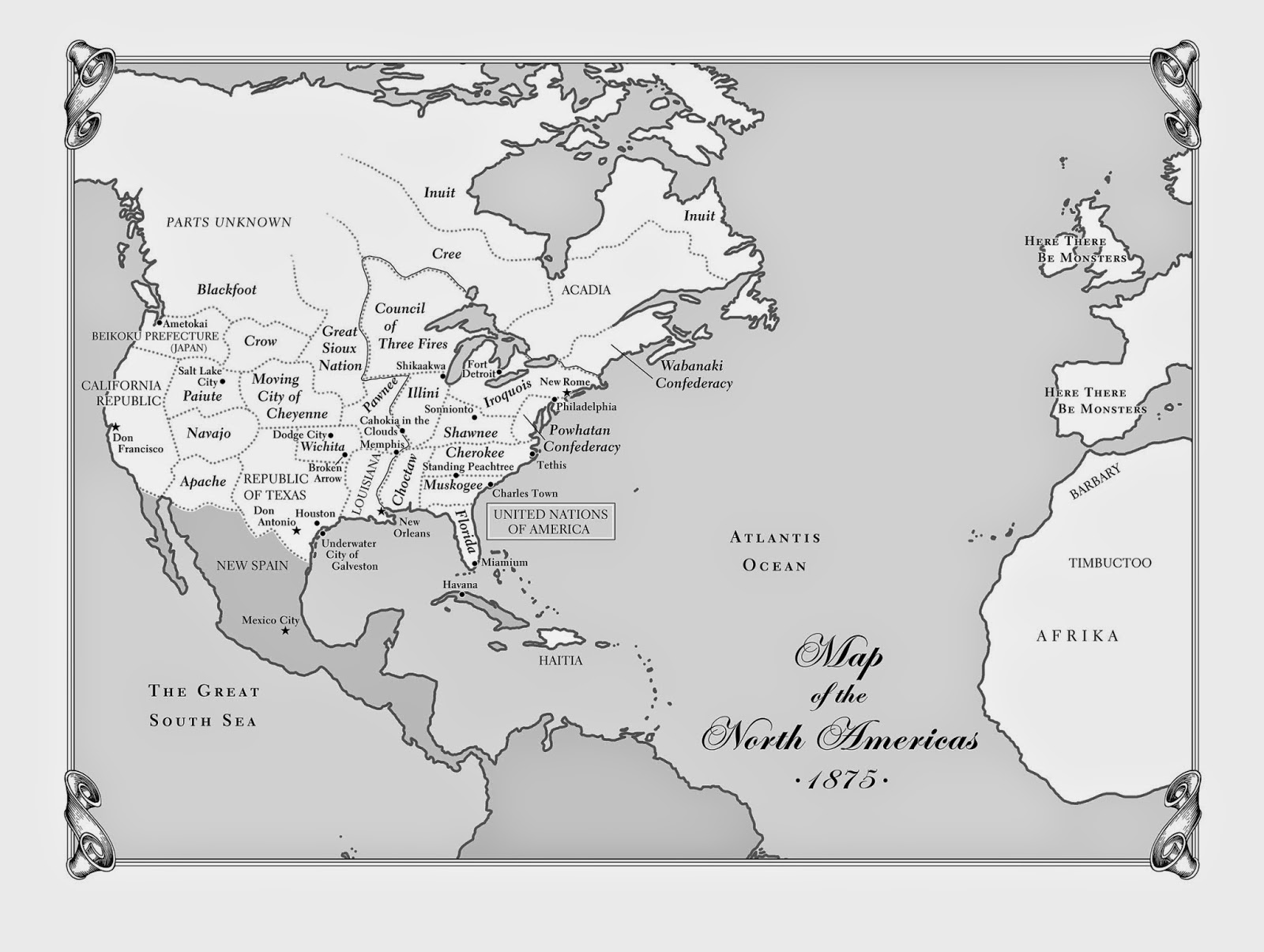 I have to warn you though, this book is dark. The immortal Mangleborn are highly influenced by Lovecraft’s Old Gods. History is not kind to former League’s either. Although the League’s do manage to defeat the monsters, they do so at great cost to civilization and to themselves. The characters in this story have all have tragic backstories and are forced to use drastic means to protect themselves and others. This makes for great character development, especially for Archie, whose childish dreams of being the leader of a new League slowly unravel as he comes to grips with his unique abilities, the nature of the Mangleborn and the truth about his past. Nevertheless, be available in case your kids have any questions. I have always felt its better to experience certain things from the safety of a book first before confronting it for the first time in the real world.

To be fair there are some pacing issues near the middle of the book, but I can still recommend this to both adults who just want to read a good story and kids who want a primer on alternate history, steampunk and Lovecraftian fiction (although I think “The Cats of Ulthar” can be read to little kids as a bedtime story even). There are only three members of this new League in the story and although we get a glimpse of the other members briefly during a vision, this is certainly a book that is getting the series treatment, which I am okay with. It is good to see more alternate history written for other age groups besides adult and The League of Seven is an admirable example.