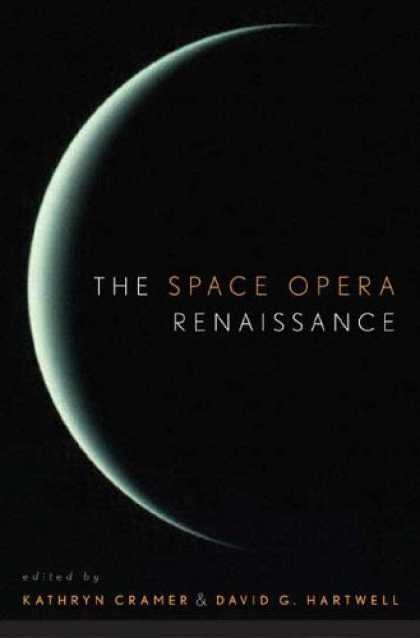 As Douglas Adams wrote, ‘Space is big. You just won’t believe how vastly, hugely, mind-bogglingly big it is.’ The same can be said for both space opera and The Space Opera Renaissance (edited by David G. Hartwell & Kathryn Cramer), a nearly 1000 page long collection which contains more fiction (around 700 000 words) than any other single volume I have ever read. In fact it contains:

I originally reviewed this epic volume for issue 250 of Vector: The Critical Journal of the British Science Fiction Association back in 2007, but as the review has long been out of print it seems reasonable to dust it off and bring it up to date for online immortality. Especially given this excellent and once pricey tome can now be had for as little as a dollar as a second-hand hardback, or as an ebook for around $7-8.

The Space Opera Renaissance is a follow-up to the editors’ The Hard SF Renaissance. It officially contains 32 stories. Officially, because two works, David Weber’s Ms. Midshipwoman Harrington (approximately 56 000 words) and Donald Kingsbury’s The Survivor (approximately 79 000 words), can be classed as novels in themselves. Meanwhile Tony Daniel’s ‘Grist’ is the entire first section of his novel Metaplanetary. These three examples demonstrate something of the problems involved in compiling an anthology of space opera; its bigness, the sheer size of the beast. Space opera, especially in its ‘renaissance’ form, tends to the epic. More than any other sub-genre of SF, space opera’s vastness ideally suits modern marketing demands for lengthy sagas spanning multiple volumes. The modern incarnations of the sub-genre really are at odds with the short story form.

But then that is where the 33rd, and in some ways most engrossing story of the book comes in. If The Space Opera Renaissance were a season of, say, Babylon 5, we would call it the arc. It runs though the overall introduction, a substantial essay in itself, and through the introductions to the stories. This arc narrative is a fascinating history of the sub-genre, discussing its origin, development, political leanings and possible future. It understands SF’s conversation with itself. How this conversation has developed over the decades and continues to expand today. It takes pains to note revisionism, recording how stories once designated planetary romance, science fantasy or even hard science fiction, have come to be labelled space opera. And how the term space opera itself has changed in popular understanding from a derogatory dismissal, coined by analogy with horse and soap opera, to become acceptable via nostalgia in the 1970’s, to the present day where it is a largely neutral marketing category. And a genre far more widely understood to be a media phenomenon than a literary one.

That said, and given the role of, particularly, Star Trek and Star Wars in making modern space opera a resounding populist success, it is odd that the book doesn’t include a single example of fiction spun-off directly from any of the media incarnations of the sub-genre. What we do get are six sections charting the form from early days to present. ‘Redefined Writers’ gives us Edward Hamilton, Jack Williamson, Leigh Brackett, and a quick spoof by Clive Jackson.

Hamilton’s ‘The Star Stealers’ (1929) might be the Ur-story. It reads as if HP Lovecraft had invented Star Trek Wars and written the ‘Armageddon’ episode. The inhabitants of a dead rogue star, wandering intergalactic space, alter their home’s course and intend to use the immense gravity of their star to steal our sun. It’s up to the Federation to stop them. Fun can be had counting the times Edmund Hamilton  uses the words glowing, titanic and luminous… and one can wonder if Peter F. Hamilton has been paying homage to his namesake in his Commonwealth Saga with his relentlessly hostile cone-aliens who happen to vivisect a crewman. Its Star Trek Wars on an enormous scale, with science as idiotic as the worse of Hollywood, and yes, ‘Han’ / the cavalry do arrive in the nick of time so that ‘Luke’ can attack the one weak spot on the Death (er, Dead) Star. So much of the genre is here it is easy to see why some consider Star Wars set SF back half a century.

Williamson was still alive when The Space Opera Renaissance was being put together and provided a thread of continuity linking the genre from its origins to the then present. Brackett (who was married to Hamilton) offers a planetary romance, and again provides a link between past and  present in that she scripted the first draft of The Empire Strikes Back. Jackson’s tale appears to be included because it neatly binds everything into the Lucas-Spielberg continuum by inventing the Indiana Jones series most famous joke.

Given that this review would approach novella length itself were it to discuss each and every tale, it would be invidious to pick out a handful of stories for special praise. Everything here is of interest, much is excellent and that which is best will inevitably vary from reader to reader. It will have to suffice that all are expertly chosen to reflect the range of the genre, as well as  to support the season arc. And yes, there is a story which goes to the logical conclusion by combining space opera with grand opera.

As for minuses… despite the book being copyright 2006 the editors didn’t seem at the time of writing to be aware of Peter F. Hamilton’s Judas Unchained (2005). They suggest that Stephen Baxter wrote a novel called ‘Rind’, and they knock a decade of Leigh Brackett’s life in telling us she died at the same age as Cordwainer Smith. But that’s just nit-picking, and it’s entertaining to spot the occasional goof. It makes the editors human. The truth is The Space Opera Renaissance is an excellent collection, though one probably best enjoyed by dipping into between other reading other things. Devour it all at once and visions of enormous mutant star goats surely beckon.

There are many expressions of fandom that cross genres and cultures – fan fiction, fan art, even cosplay.  But there is one form in particular that is distinctly Japanese, both in its origin and in its current form, and that is doujinshi.  The term refers to anything that is self-published (“doujin” means “same person”), but […]

The Artful Collector: REAL Questions and Answers from a Dealer’s Archive – Just One Example