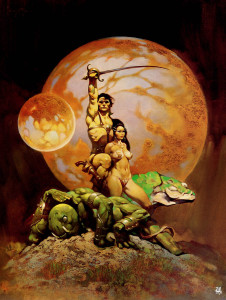 Discussions of what is and what is not Sword & Sorcery can be a thorny proposition. On the one hand S&S is largely no different than epic Fantasy (ala Tolkien) except in scope or tone. On the other side is a branch of Science Fantasy known as Sword & Planet, and to many is called Sword & Sorcery with frustrating regularity. But there are differences.

Sword & Planet is older than Sword & Sorcery. It can be traced back to 1880 and Across the Zodiac by Percy Gregg, though the sub-genre didn’t really take off until that master storyteller Edgar Rice Burroughs began writing with “Under the Moons of Mars” (All-Story 1912). Some call this style of tale “Planetary Romance”, for that was Burroughs’ great success. He took space adventure and married it to romantic plots that would sell well to both men and women in the general fiction magazines of the time. The routine adventure plots of Burroughs’ John Carter of Mars involve weird creatures, evil villains, swordplay and laser guns in a landscape of color and strangeness. The mix was a winner and remains readable and popular to this day. 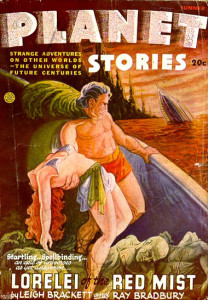 The term “Sword & Planet” was coined by Donald A. Wolheim( the publisher who created DAW Books which published many Sword & Sorcery novels in paperback) at the same time that Fritz Leiber gave us “Sword & Sorcery”, the early 1960s. Looking at the name, the obvious similarity is “Sword” and the difference “Sorcery” and “Planet”, and in some cases this works. Much of the Planetary Romance canon feels different than Sword & Sorcery, being closer to Space Opera, that sweeping style of Science Fiction that is best associated with Buck Rogers. But even as early as 1939 the differences begin to blur, with Robert E. Howard’s posthumous novel, Almuric. Winged, evil overlords, a savage planet and Esua Cairn the brutal superman, all feel more like another Conan tale. Howard was chasing the Burroughs magic along with many other pulpsters including Otis Adelbert Kline and J. U. Giesy. 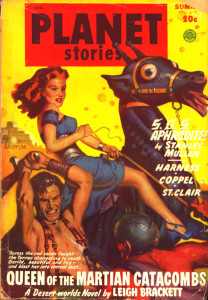 Things really start to get fuzzy in the interregnum between the death of Robert E. Howard and the Lancer revival, when Malcolm Reiss began to edit a pulp called Planet Stories (1939-1955), the most famous and unapologetic Sword & Planet pulp of them all. In those 71 issues was the greatest writer of adventure SF, Leigh Brackett, as well as an evolving Ray Bradbury. Together they would pen the strange Sword & Planet classic “Lorelei of the Red Mist” (Summer 1946). The genesis of the tale was that Brackett was halfway through when Howard Hawks called her to work on the screenplay for The Big Sleep. She abandoned the ms. to Bradbury (who was not the famous author of The Martian Chronicles yet, but better known for his first tales in Weird Tales) who completed the story without consultation or assistance from Brackett. The end result is a story so achingly Sword & Sorcery but not. The plot concerns Hugh Stark, a scrawny thief who is projected into the body of Conan, a muscular warrior who has betrayed the humans to the Sea People. He falls in love with the daughter of his betrayed king and is torn between his reputation and his new desires to save those who hate him. Shades of Almuric, “The Sapphire Siren” by Nictzin Dyalhis, and of course the name “Conan” (given in honor of the Howard character) all give the tale a Howardian flavor but ultimately the story is Sword & Planet with lasers and spaceships, though it is easy to imagine it without. The elements of telepathic magic foreshadow the Witch World series by Andre Norton and the Darkover novels of Marion Zimmer Bradley. 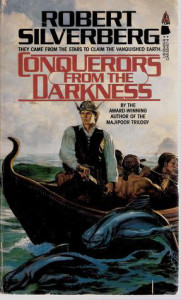 Planet Stories published other stories with the same S&S feel such as Poul Anderson, Henry Kuttner and Gardner F. Fox. The magazine died in 1955 along with all the other pulps but is fondly remembered by fans such as Robert Silverberg who penned a very Planet Stories novel The Conquerors From the Darkness (1965) under the pseudonym Ivar Jorgenson. It even features a war with the fish people. After the 1960s, which produced many of these sort-of-S&S books the waters become even muddier in the 1970s when magazines like Heavy Metal produce comics with their own blend of Sword & Planet. These were immortalized in the film version’s (1981) “Taarna” sequence with its pterodacyl-riding, sword-swinging, mostly naked female protagonist. By this time it almost becomes pointless to differentiate between the two sub-genres, a trend we will hear much more about when we get to role-playing games.

Ultimately, it doesn’t really matter if a book is Sword & Sorcery or Sword & Planet if you love action-packed Fantasy. Both feature muscle-bounded heroes, beautiful maidens, colorful backdrops and quick-paced action. Whether it is The Baalbak Quest by David J. Kelly or The Dream Lords series by Adrian Cole, all that really matters it that the spirit of Burroughs and Howard live on. It’ll have a Sword in it, right?