As I put the finishing touches and edits on my latest novel, I am charged with the task of also creating the cover art. I consider myself to be a good photographer but for some reason the perfect image for a book cover eludes me. Luckily, for me, I have some really good friends all around the world who want to help me with this problem. Some are artists, some are other photographers I have met, and some are models. Let me back up here for just a minute.

My novels are usually set in England, most specifically in the city of London. Over the years with my many travels to the U.K., I have met and became “mates” with a lot of great people. Several of them help me out by reading the first draft of my work, giving me tips and pointers on English colloquialisms and spelling, and such. They are always a big help on dialogue, as well, especially on the last two novels – Blood Underground I & II – as they are part of the series I began about the vampires who inhabit the unused and forgotten tunnels that once transported people and mail all over London and there are specific dialects to some of the characters, most of which has to be written phonetically to get the point across.

Back to the current dilemma. So with the second in the series nearing completion my attention has turned toward the artwork for the cover. For Blood Underground I it was simple. A friend of mine who models in London read the story and sent me a photo he thought would work well. It fit the storyline perfectly. It was as if he had lifted it straight from the pages of the novel itself; funny thing was the photo was taken about a year prior to me even writing the story. The picture, however, was a bit too risqué for normal publication so it was edited slightly and my name went across my mate’s naughty bits. Before publishing, I posted it in several versions on my Facebook page and asked for input. After a couple of days I had a clear winner and the rest is history.

Now, with Blood Underground II I had almost an identical experience except I came across a photo taken by a friend of mine and, again, it looked as if it had been taken right from the story. With his permission and that of the model, it will be used for the cover of book two. This time, it has been a struggle to get the editing and the font style to just the right point. I think it is now a proper cover and most of my friends on Facebook are in agreement that it looks fantastic.

Blood Underground II picks up exactly where book one left off so there’s several familiar characters and a couple of new ones, as well. The story centers around Liam Thackeray, sort of the head vampire, if you will, for the group that inhabits the tunnels that were abandoned by the Royal Mail in the late twentieth century and several of his companions, but human and vampire. The thavs, as they call themselves, are not your typical vampires for the most part, but I won’t divulge much more of the storyline here. It’s safe to say that the tale steps a bit outside of the usual vampire lore and takes you on a journey right along with them as they try to live their undead lives undetected as such by the humans above them. There are a lot of twists and unexpected turns to the story and there are going to be at least four more books in the series – probably more. I get inspired at the end of each one I write with some little spark that leads me into the next; that’s why I have the outlines for the next four already done.

So the novel should be published within the next couple of weeks, hopefully before I head for London and to the MCM Expo Comic-con in mid-May, as you learned in my last posting. This should be my last self-promoting posting for quite some time as there are a couple of really exciting events coming up. My best friend is attending Comic-con in Wales as I write this and will be giving me a full report and some photos. I also hope to do some interviews and take some really great photos while I’m at Expo in London this year and post them in my next musings on Amazing Stories. Another friend of mine has published several vampire stories of his own and I hope to review them, soon. 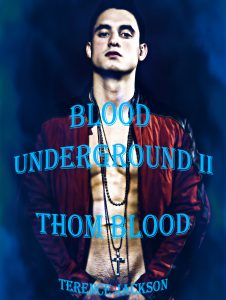 Until then, keep reading!