Author’s Note: Last week I wrote about one of my favorite Star Wars characters, Admiral Motti played by Richard LeParmentier. It is with disappointment and sadness that I learned of his death this week. (04/16/13) Besides Star Wars, Richard appeared in Who Framed Roger Rabbit, the James Bond film Octopussy, and Superman II, as well as many other films and television shows. While Clark Kent had troubles taming the female supervillain Ursa in Superman II, Richard wound up marrying her. Time after time Richard stood strong against the forces of evil. He will be missed.

After spending the better part of a week watching a security robot roll back and forth on patrol, I began to consider the place of robots in our society. The definition of a robot can stir much debate. As the lines blur between science fiction and fantasy, so do the lines between robot, android, and cyborg become fuzzy. Countless other names and classifications are created every day to group these creations, but for the moment we will ignore them.

For my definition of a robot, I draw upon my own notions while seeking a little help from the dictionary. Robots are mechanical in nature. They are made from metal and plastic and electronic components. Robots in my mind lack organic components.  They are powered by software in the form of artificial intelligence or they are remotely controlled. Robots do not need to be sentient, although most can act autonomously.

Cyborgs on the other hand were people first that later had the elements of a robot added to them. Androids, in my mind, have a synthetic base which is either combined with organic matter or created in such a way as to resemble organic matter. So my quick summary is as follows: Robot = machine, Cyborg = human-machine, Android = organic-machine.

The first appearance of the word “robot” is believed to have occurred in the play R.U.R. by Karel Capek, a Czech playwright. The play detailed a factory that made synthetic organic matter (something I would classify as androids). In Capek’s play the robots rebel against the humans and eventually exterminate them. Rossum’s Universal Robots hit the theater in 1920, which ironically is the same year that Isaac Asimov was born. 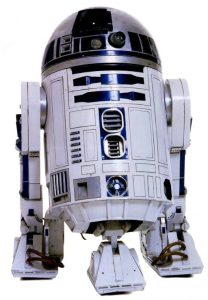 Perhaps this play was an inspiration to Asimov. Perhaps as a youth the robot’s extermination of humanity pushed the young author to consider his now famous Three Laws of Robotics. First Law: A robot may not injure a human being or, through inaction, allow a human being to come to harm. Second Law: A robot must obey the orders given to it by human beings, except where such orders would conflict with the First Law. Third Law: a robot must protect its own existence as long as such protection does not conflict with the First or Second Laws. We can imagine the decision tree that this would create inside each robot’s programming.

Many of today’s scientists have been inspired by science fiction to create the modern robot. Much debate has raged within the artificial intelligence community regarding the Three Laws of Robotics. For this discussion let’s put aside the AI debate. The discussion of singularity and consciousness within an artificial brain are for another article. Here we are dealing with robotics. Much of robotics requires AI, but this AI is on the scale of decision making rather than some achievement of human-like thinking. In my mind robots require some rudimentary AI, but AI does not require the presence of a robot.

Modern robots are increasing in number every day. We find them performing tasks that humans used to undertake. In some cases the robots perform the tasks more efficiently and more precisely. Some perform tasks humans no longer want to do, while others perform tasks that humans consider unsafe. In each case the robot has been born from need. Sometimes a need for safety and other times a need for higher productivity.

We find robots working at the factories assembling cars. Amazon uses robots in their warehouses to ease the burden of the human employees. The robots bring the shelves to the humans so that they can fill your orders more quickly and with less physical stress. The military uses unmanned drones to spy on its neighbors. Robots vacuum your house and clean the pool. Every day a scientist thinks of a new use for robots.

I chatted with a scientist who created a security robot. He told me that the inspiration for the robot came from watching the television show Lost in Space when he was younger. He always dreamed of having a robot. Now that inspiration has replaced a security guard. The robot patrols a 250,000 square foot server farm, monitoring temperature and anomalies while sending back data to the control center. It films every inch of the building so that you and I can surf the internet. Google alone could fill all of the NFL football stadiums with the servers it requires for its search engines. Unassuming robots will be monitoring them in the next decade to make sure we never go without our data.

We live in a world intertwined with robots. They have become such a part of our culture that they have become mundane. Robot wars have grown tiresome. The discussion of nanobots hardly registers on our radars. In the near future robotic cars will be dominating the streets of Las Vegas. Nevada, Florida, and California have already approved the use of Google’s robotic cars on their streets and highways. In May 2012 Nevada issued the first “driver’s license” for a self-driven car. The technology of robotics is marching forward whether we like it or not.

So where do we find the Three Laws of Robotics in this mad dash forward? Honda at least has not forgotten Isaac Asimov as evidence by the name of their robot, ASIMO. As we dig deeper, we see that the laws of robotics are very real. The First Law states that a robot may not harm a human. This is obvious in modern robot design. Safety is the top priority of any new product. The field of robotics is no different. Engineers and scientists go to great lengths to make sure their robots are safe. They would never be allowed for use if they were not proven safe. The security robot, for instance, has sensors that prevent it from running over someone during patrol. The sensors detect the presence of the person and stop the system.

The second law states that a robot must obey a human unless it could cause safety issues. This again is self-evident in the design. While we have robots that act autonomously, they have controls that may be overridden by human control. The security robot asks (with an actual robotic voice) its controller for instructions. Once the instructions are provided either by voice or computer command, it carries them out. Its array of sensors are always on guard for safety risks. Should the command introduce a safety risk, the robot breaks from the command and reports the reason for the change. Like a good obedient robot, it waits for further instructions.

The third law is also self-evident. The robot shall preserve itself as long as it does not pose a safety concern to humans. With many robots costing tens of thousands of dollars or more, design features allow the robot to monitor its own status for overheating and for other forms of damage just like your car warns of possible failures. Nearly every robot has been programmed to prevent damage to itself.

Was Asimov a prophet of technology or did scientists consciously follow his Laws of Robotics? Perhaps the laws Asimov created so many years ago are so logical that by necessity of design they have come true. Clearly the robots of today follow the Three Laws of Robotics. Science fiction authors imagine robots with technology far beyond our present abilities. They dream of thinking robots with humanlike qualities. Will the day come when robots can shake off the laws of robotics? If it does, how close will it resemble Karel Capek’s vision?

In this week’s viewing: My Next Life as a Villainess goes on vacation, Tower of God lets its hero catch his breath, and more!