Home Fandom The Clubhouse: Looking for fandom — ConFusion at 40, Part 4 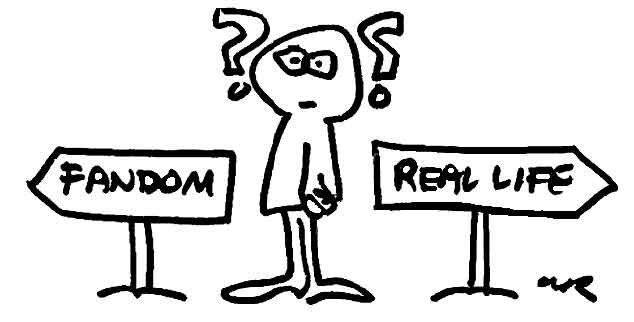 Wherefore fandom?
Fandom does not equal “the science fiction market.” To be a fan it’s not enough just to be a consumer of science fiction. To be part of fandom you have to participate in fandom as a community. You have to interact with other fans. You have to do fannish things. You cannot be a fan all by yourself.

I get in trouble, often, when I say things like that. I get labeled “elitist” and “exclusionary.” Yet I don’t believe it’s exclusionary to say someone isn’t part of a community they have no idea exists and probably wouldn’t want to belong to if they did.

When I said it during an Immortal ConFusion panel on “Inclusion in an Expanding Fandom,” Mary Robinette Kowal got up and nearly walked off of the panel, saying I wasn’t including her. Kowal’s idea of fandom, based on what she said, is that it consists of people who are fans “of” something: a TV show or an author or some other thing produced by people who get paid to do it. That’s not my fandom at all.

Nor does fan mean, as blogger Astrid Nielsch insultingly defined it, a perpetrator of works based on “a comic/manga, animation, movie, TV show or game — and which are therefore derivative, and may infringe a copyright, trademark, or other right of authorship.” Nielsch goes a step further than some others who use fan as an antonym for pro, with the implication that if something isn’t salable it’s inferior. Years ago, the World Science Fiction Society revised the titles of the Hugo Awards to replace amateur, which was originally used in the highest and best sense of that term — “a person who engages in a study, sport, or other activity for pleasure rather than for financial benefit or professional reasons” — with fan just in order to avoid any possible confusion with the secondary meaning of “lacking in experience and competence in an art or science.”

Most of the fan artists and writers I know create highly original work. What makes the adjective fan apply is that they create it for the pleasure of other fans and for egoboo, rather than for commercial publication. The winners of the Hugos for Best Fan Artist and Best Fan Writer bear that out. Yet derogatory views of fandom as some kind of unsavory parasites on the professional world have, if anything, increased as fandom and general interest in sf have grown.

About a dozen years ago, I was privileged to help to host a joint event combining the fanzine convention ditto and the Timebinders’ meeting, FanHistoricon. Among those in attendance were Forry Ackerman, Jack Speer, Bob Tucker and Art Widner, all of whom were around at fandom’s beginning, and I asked them who it was who dubbed this community fandom.

None of them knew. I’ve subsequently posed the question to other early fans, including Dave Kyle and Fred Pohl, and they didn’t know either. So it’s likely we’ll never know.

I think, though, that whoever it was did us a disservice. If, instead of fans, we were called, say, thusiasts (the term Bill ‘the Galactic’ Fesselmeyer used in his wonderful piece of faan fiction, “How the GRINCH Stole Worldcon“) or stfnists or some other unique word, we might today have less misunderstanding about the difference between fan in the mundane dictionary sense and fan as a term of art meaning “participant in the community that arose out of Hugo Gernsback’s creation of the Science Fiction League.”

The subject came up on the ConFusion panel when I said that fandom has less influence on the professional world of science fiction than ever before. What I meant is that, from the Gernsback era through the 1980s, most pros, both writers and editors, came out of fandom. Their friends were fans and they partied with fans. And so fandom had a very direct influence, disproportionate to the market, the buyers, of science fiction. Nowadays, most pros didn’t start out as fans, and their involvement — if they have any at all — is mainly commercial. Their publisher or their agent or somebody else tells them that they’ll win more awards and sell more books if they appear at cons, so they go. They hold their books up in front of them when they’re on panels, and when they’re not on panels, they’re rarely anywhere to be seen.

In these times, when sf is mainstream and people talk about it in the same way they discuss football or music, and geek culture is trendy, the fannish community is wider and less cohesive than it once was. But there is still a distinction between people who participate in the microcosm and consumers.

The bulk of the “Expanding Fandom” panel was not — as I had assumed it would be — about “Big Tent” fandom, which is to say, what you might call original fandom plus all of what we used to call the “fringe fandoms” that today far outnumber us — comics fandom, media fandom, anime fandom, furry fandom et al. Instead, it was about racism and sexism.

That threw me off, because the fandom I participate in is not racist and only inadvertently sexist. It is, it’s true, mostly white, and if its members are, perhaps, guilty of failure to engage in outreach, they are no more inhospitable to people of color who find their way in than they are to anybody else. Fandom is not particularly welcoming to anyone until they’ve paid their dues, but it’s much more colorblind than society at large.

Indeed, the very first sf fan club, the Scienceers, founded Dec. 11, 1929, met weekly in the Harlem apartment of its president, Warren Fitzgerald, whom club member Allen Glasser described as “about thirty … a light-skinned Negro — amiable, cultured, and a fine gentleman in every sense of that word.” During the 1950s, when fandom was even whiter than it is now, a group of fans decided to see how the microcosm would react to a black fan, so they made one up; the hoax, Carl Brandon, quickly became a BNF.

Tokenism, as in this panel, doesn’t strike me as a productive form of affirmative action. The panel featured one African American, Andre Batts, a comics artist who was specially invited to ConFusion, which he said was his first sf con, for this panel — he had only been to comics cons before; one Asian American, neopro Wesley Chu; moderator Jim C. Hines, who at this point may be better known for his attempts to contort into the unnatural poses of the heroines on his books’ covers than for the books themselves; Anne K. Gray, an Ann Arbor conrunner who copy edits for Subterranean Press; Kowal; and me.

I note that on this panel supposedly about fandom, there was not a single person without a professional connection to the field, not even me. Not that pros can’t also be fans, but you’d think that a panel with “fandom” in the title would have somebody who wasn’t a filthy pro. That really influenced the panel, because when most of these people talked about “inclusion,” they didn’t mean who writes for fanzines or goes to Worldcon, they were talking about which pros are published, what they write about and what shows up on the big and little screens. And as I said above, fandom does not have much influence on that. Consumers may, but fandom is an infinitesimal part of the market.

Fandom, as I know it, is a meritocracy, more about what you do than who you are. But what do I know? The minority to which I belong is — despite narrowly escaping genocide in recent history and still-extant bigotry in the wider world — rarely considered in that light today, and has, in any case, never been a minority within fandom. I never felt excluded because of my ethnicity or my gender. Nobody ever challenged me about my knowledge of sf. My personal struggles in gaining acceptance in fandom were documented by Walt Willis and Bob Shaw in “The Enchanted Duplicator” before I was even born. Once I, like Jophan, crossed the Jungle of Inexperience and the Desert of Indifference, the path to Trufandom became clear.

Meanwhile, women probably outnumber men in fandom these days, and such sexism that exists among fans is not of the “women are inferior” sort but more of the “women are sex objects” type, fomented by the social awkwardness of fans of both genders. I am old and long married and haven’t had to fend off unwelcome advances in years — but in my youth, the fanboys were so croggled that there were females around them at all, they had no idea of how to behave, while the femmefen were so unused to male attention that being the object of even geeky guys’ fantasies felt empowering. Today, it appears, the young men are no more suave, but the women have less forbearance for ham-fisted attempts at flattery and seduction.

There was, apparently, a whole controversy in media/comics/cosplay fandom about “fake geek girls” that escaped my notice because, in the bookish fandom where I hang out, “booth babes” do not exist and conventionally beautiful people of either gender are rare. In fact, the only episode I ever saw of anything like that was in 1982, when the Chicon masquerade featured a gorgeous hunk who turned out to be an actor hired by Bridge Publications to promote “Battlefield Earth.” Everybody spotted him for a ringer immediately (although another actor, who signed himself “H. Ford” in the art auction, was able to blend in incognito. Yes, that H. Ford — “Raiders of the Lost Ark” won a Hugo that year).

The second ConFusion “fan” panel, “Fandom vs. Social Media,” also wasn’t what I had expected. The description of the panel and its title didn’t jive at all, and so we agreed to ignore the latter. As moderator, I had hoped to talk about fandom online and how it is essentially a continuation of the conversation that started in the pages of Amazing Stories in the 1930s, but I was stymied by the other panelists, Michael R. Underwood and Peter V. Brett, again both pros, who seemed more interested in discussing their use of social media as a means of communicating with their readers rather than as a latter-day version of lettercols and apae.