“Meh” or “Must Watch”? Veronica will tell you. 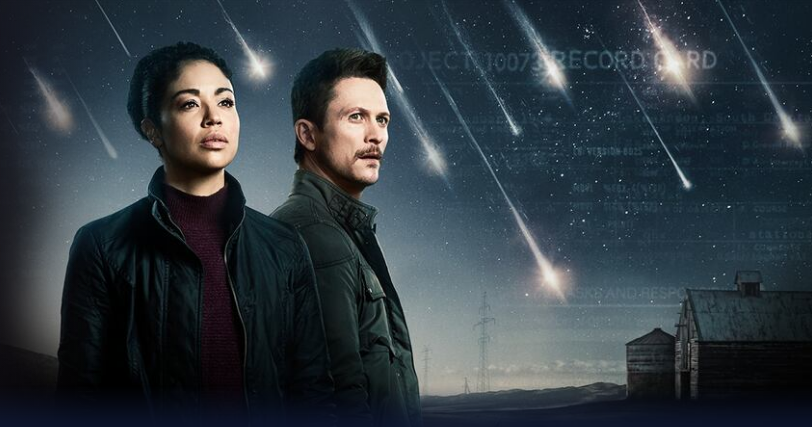 I was curious to watch episode one of the new NBC science fiction show “Debris” because the premise sounded so interesting.  I always crave new SF.

From the NBC website: When mysterious wreckage starts falling from the sky, a secretive international agency is tasked with figuring out what it is, where it came from, and most importantly… what it can do. British agent Finola Jones and American agent Bryan Beneventi are partners who have very different styles – she’s warm, intuitive and detail-oriented, and he’s charming, confident and guarded. But they have no choice but to trust each other as they track down the debris scattered across the Western Hemisphere. Each fragment has unpredictable, powerful and sometimes dangerous effects on the everyday people who find it. Every discovery is also a race against time, because shadowy outside forces seek these objects for nefarious purposes.

Not having watched a weekly program on network TV in a long time, I’d forgotten about commercial breaks and the necessity to present a plot which could be neatly wrapped up in an hour minus the aforementioned commercials. Both aspects were jarring to me, now being a confirmed binge watcher of streaming miniseries and doing marathons through entire seasons of shows.

Once I got past that reminder of TV-past, I was left feeling very meh about the program. Not a must-watch for me. I give this show a C.

On the positive side, I love the concept of the alien spaceship disintegrating as it enters the solar system. I’m frankly fascinated by the backstory of that, which sadly,  in episode one at least, the series shows no signs of exploring, versus the “what does each piece of debris do this week” storytelling. I liked the way the program began, with the tiny shard of debris transporting an unfortunate maid from high up in a hotel to her death in the dining room, without marring any of the ceilings or floors she falls through. Grabbed my attention!

But there was very little about the alien technology or curiosity on anyone’s part about the aliens themselves or what destroyed the ship. No discussion about whether the debris is actually some kind of invasion or what might happen next. No one here seems to care if there was an FTL drive to be had.  I frankly wished this was a series about going to explore what’s left of the hulk in space, rather than these cut and dried, solved in an hour individual cases.

In general I like the idea of a team of agents working together, forming a bond, maybe even defying their respective superiors and countries in the future because they’ll become such a team as they explore the mysteries.

Riann Steele, who plays Agent Finola Jones, was excellent. Strong, smart, compassionate. I was quite convinced by her and want to know more.

I’m sure Jonathan Tucker, who plays Agent Bryan Beneventi, is a good actor. He showed a range of emotion during the first episode but enough with the mysterious hints about his personal backstory. He seems to be a steely eyed Special Forces type, ready to kill people efficiently if such action is required but I just never quite believed in him. He seemed as if he’d wandered in from a police procedural show maybe. Sort of a stock character and the actor did his best with what was in the script.

I didn’t really feel chemistry between the two leads, no sparks.

I was neutral on the team of bad guys who seem to know quite a bit about the debris already, enough to use it to teleport places, although one underling ended up in the middle of a freeway pillar and that was literally the end of his story arc. I suppose it’s inevitable there would be people seeking to find bits of this debris and put it to their own uses, since the stuff is evidently falling worldwide. There was a reveal late in the show about who one of this group may be, which could indicate twists ahead. Not bad guys after all, maybe?

I didn’t believe for a minute this could all be kept a secret from the world’s population. And frankly, by skipping the part where the alien ship is first sighted or when the mysterious debris begins to fall, I thought the show runners missed a lot of opportunity for drama and excitement. Other than being careful how they handle the stuff, no one seems all that excited frankly.

The particular story of the first week’s show, about an eerie little boy and floating bodies started out to be cool but was neatly resolved before the final tag scene and left me scratching my head. Why the fragments from an alien ship would choose to do the things this plot covered made no sense to me. And before you say it, yes, I realize we’re dealing with ALIEN stuff here…but still, it has to make some sense to the viewer, doesn’t it? This viewer anyway or I won’t be tuning in again.

The talents of Tony award winner Norbert Leo Butz seem wasted to me as Craig Maddox, Bryan’s all-knowing CIA handler. Talk about a stock character at the other end of the phone line!

I might give this show one more chance because they do have intriguing concepts to play with but so far, I’m not invested in any of it. It was hardly an “edge of my chair, what will happen next” viewing experience except for a few minutes here and there.

The show was created, written and co-executive produced by J. H. Wyman (‘Fringe’). Produced by Universal Television and Legendary Television. I watched it on Peacock, the Universal NBC streaming service (with commercials!).